3.  That Julian Assange, Chelsea Manning and Edward Snowden deserve to be treated as Superheroes for trying to save our freedom -- instead of being treated like Darth Vader and Joker; 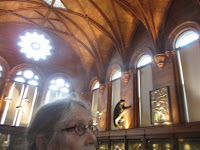 4.  That Trump may be bat-shite cray-cray but Pence has sold his soul to the Devil -- and I know this because I met him personally in Iraq in 2007 as he positively gloried in all the evil murder and "war" going on over there  http://jpstillwater.blogspot.com/2007/04/letters-from-iraq-me-light-brigade-john.html;

5.  That we are slowly but surely going back to the days of coat-hanger abortions.  Is this really what we want for our wives and daughters?  I would hope not;

6.  That 5G will give us brain cancer as well as high speed;

7.  That the human race's basic survival just might be more important than driving our cars to work and fueling up our F-35s;

8.  That the nasty preservatives and fillers in flu shots could be giving us Alzheimers at an alarming rate but how are we to ever know -- because Big Pharma cleverly blocks any comparative studies on this subject (and if they actually are being done, Google doesn't list them); https://articles.mercola.com/sites/articles/archive/2011/11/24/more-people-getting-flu-shots.aspx

9.  That our country is currently twenty-two (22) trillion dollars in debt and almost none of that money was spent on you and me.  At this rate, America will be going bankrupt just like the old Soviet Union -- and then we'll have oligarchs feeding on America's corpse too.  Someone needs to cut up America's credit cards immediately.  Screw the Federal Reserve!  It's more dangerous to us than Russia, China, Israel and Iran combined;

10.  That our very own political parties, congress members and supreme court justices are willing to do whatever it takes to get war-criminal presidents into office -- and I don't just mean Donald Trump;

11.  That the chances of our children and grandchildren getting good jobs, receiving a good education, avoiding taking up residence on our couches and living happily ever after are shrinking daily;

12.  That we need to use paper ballots and have our ballots counted only by Girl Scouts and nuns;

13.  That primitive tribes in the Amazon jungle are much happier than we are;

14.  That we currently spend multiple billions of $$$$ helping our Zionist "ally" create Greater Gaza in the Middle East -- but sooner or later this wanton spending on gulags is gonna come back to bite us in the butt;  https://www.unz.com/pgiraldi/feeding-the-israel-lobby/

15.  That our babies' brains are too fragile to endure the onslaught of so many vaccinations at such a young age and thus really weird results may occur such as dyslexia, ADHD and gender confusion.  Pretty soon a huge percentage of our kids may be illiterate, hyperactive, gay, autistic, infertile or even dead.  Yuck!  "He was Murdered" – 13 Month Old Infant Dies 14 Hours After Receiving the Flu Shot

16.  That evil warmongers, heartless drug companies, greedy banksters and huge corporations are not our friends -- no matter what we are told by our televisions and SmartPhones;  Trump Tax Cut Hands $32 Billion Windfall to America’s Top Banks

17.  That racism will also come back to bite us in the butt too (again);

18.  That Zionists and Saudis, not Russia or Iran, are happily stabbing us in the back daily -- and Netanyahu and Prince BnB are not our BFFs either;   https://www.mintpressnews.com/cybereason-israel-tech-firm-doomsday-election-simulations/263886/

19.  That America is anything but a Christian nation even despite all that dust-up about the unborn (don't believe me?  Go ask Jesus how He feels about compassion, charity, murder and mercy);

20.  That since the "war" on Vietnam, Americans have become so increasingly afraid of their own shadows that 22,000 gun owners showed up at a rally in Virginia recently, many of them clutching ugly brutal military-grade weapons as if their very lives depended on possessing these monsters -- just to prove how very very afraid that they actually are;

21.  That our Congress is bought and paid for by huge corporations -- and so is our Presidency and Supreme Court;

22.  That the very next homeless person gasping for clean air, unemployed, dying without healthcare, eating out of dumpsters, being a hater and contemplating suicide could be you (or me);  https://www.independent.co.uk/news/world/americas/alabama-minimum-wage-raise-senate-blocks-birmingham-a6900251.html

23.  That our elections are all stolen, rigged, gerrymandered, poll-taxed and/or hacked (and not by Russians either);

25.  That human beings are wondrous creations.  All human beings.  Even women and children.  Even socialists.  Even poor people.  But will the earth miss us when we have finally driven ourselves extinct?  Not for a minute;

26.  That by murdering so many people abroad, we are also sealing our own doom here at home.  What goes around comes around;

27.  That those aren't "climate refugees" at our border.  They are asylum-seekers fleeing America's pirate foreign policy in Latin America.  And those 5,000-plus babies we are currently keeping in cages?  Words fail me.  We don't even treat puppies that badly;

28.  That the Trump impeachment was just a tacky side-show meant to distract us from seeing what is really going on in the Big Top -- where Wall Street and War Street perform in the center ring;

29.  That America's true artists and creators are forced to molder away in poverty like they were some unwanted outcasts starring in the opera La Boheme -- starvation, attic garrets, tuberculosis and all;

Trump also promised to reduce the national debt but just look at us now.  We're more in debt now than we have ever been -- and with much more debt to come.  He also promised to shrink the Federal Reserve.  Ha!  https://www.youtube.com/watch?v=ucoF5hnqz7Q&feature=youtu.be

31.  That America is a top manufacturing giant -- but only of weapons of mass destruction.  And these deadly weapons are being sold to the Saudis so that Prince BnB can massacre helpless Yemeni babies.  That's embarrassingly shameful;

32.  That America claims to be a democracy.  Ha!  America is just one more sleazy top-down oligarchy.  Get used to it;

33.  That President Assad of Syria is actually a good guy and Syrians love him because he has become their High Noon hero who saved them from all those gun-toting American-Zionist-Saudi oil-mad dry-gulching propaganda-spewing rustlers -- and also saved Syria from ISIS too.  http://jpstillwater.blogspot.com/2019/10/union-maid-my-wonderful-visit-with.html

Stop Wall Street and War Street from destroying our world.   And while you're at it, please buy my books.  https://www.amazon.com/Jane-Stillwater/e/B00IW6O1RM
Posted by Jane Stillwater at 10:05 AM