Springsteen, Baez, Robeson & me: My five minutes of fame in Damascus

The conference I'm attending in Damascus has been going on for over seven hours already.  Approximately 200 trade-union delegates from all over the world had arrived here in order to express solidarity with their fellow trade unions in Syria. 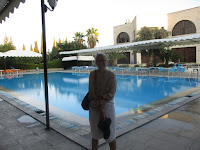 However, unlike in America where corporate CEOs are the top guns and only teachers and nurses have enough cajones to go out on strike, workers' unions in Syria are totally helpful and alive.  For example, all of us delegates are staying in a massive four-star hotel whose usual purpose is to give hundreds of Syrian workers and their families a week-long all-expense-paid vacation destination.

Can you even imagine Walmart doing anything like that for its workers?  Or Jeff Bezos?  Ha.

I arrived at the conference hall early and grabbed a front row seat so I could see all the action.  "You can't sit there!" said another delegate who had also arrived early.  "You're not in a union!"

"The hell I'm not!" I exclaimed.  SAG-AFTRA, bitches.  Union Maid through and through.
But then a nice Korean union representative said I could have a seat next to him, a nice South African union rep also volunteered a seat for me and a nice union rep from Belfast patted my hand.  Union solidarity forever!  http://nymag.com/intelligencer/2019/09/democracy-dies-when-labor-unions-do.html 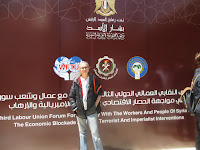 Seven hours of speeches later?  The conference hall was starting to empty out.  Only 50 or so delegates were left.  "It's time for you to make a speech, Jane."  Me?  Oh, okay.  I can do this!  Slouching hesitantly up to the podium and bravely looking the last remaining 30-odd delegates in the eye, I began to do my best -- and hoped that somehow it might be good enough.

"I had some other kinda cheesy speech prepared to give here today about my own wonderful union," sez me, "but after seeing Damascus and talking with dozens of Syrians, I've changed my mind.  I want to talk about America instead -- and what, exactly, the Syrian people are actually up against.  And how heroic you all are to take an almost-hopeless stand against the American killing machine."

So far so good.  No one has thrown me off the podium yet.  No rotten tomatoes.  I slogged on.

"21 trillion dollars.  That's how much debt the American government is in right now.  It's as if you went out to buy a car.  A fancy car.  A Maserati, let us say.  And then you were told that no matter how much money you spend on this car, it doesn't matter.  Your credit card will never be maxed out.  Your Visa card will always be good."

At that point some of the delegates had actually stopped leaving.  I cleared my throat and muscled on.

"This is what the Syrian people are up against.  Bottomless wealth.  But.  It is a false wealth.  It is an illusion, a fantasy.  And yet the American people still cling to this unrealistic dreamland.  But.  America can't be a global invader, an international empire, the world's only superpower -- not based solely on play money and plastic.   America is just a house of cards."

This speech is going on far too long.  I expect Vanna White to suddenly come across the stage and cut me off at any moment -- or Steve Harvey to slap his buzzer.   But Chris Harrison didn't come out to lead me tearfully away from the rose ceremony and so I continued.

"Making your average American aware of the fact that he or she is standing on an economic cliff, about to tumble over?  That is the hard part for honest American journalists.  No one ever wants to be told that they are about to commit economic suicide.  But the bottom line here is that while economic sanctions do hurt Syria badly, please be aware that America is also sanctioning itself.  21 trillion dollars worth of sanctions.  For which America may never recover."

Is this speech ever going to end?  Have I reached the five-minute mark yet?  What the freak am I going to say next?  And, even more important,  am I going to get shot for treason when I get home -- for pointing out that our American emperors have no clothes?

"We Americans here in Damascus must return to the Belly of the Beast itself and try to make Americans there aware of this false illusion.  That has to be our next job.  And one thing that seems to work well in fighting fake news and false propaganda is to pick just one talking point and stick with it.  Such as 'President Assad has kept Syria from becoming another Libya'.  Sooner or later you will get your point across."  Or finally just give up.  But hopefully not.

"Another technique that historic labor unions have used in the past to gain support for their cause has been to compose heart-wrenching songs such as The Ballad of Joe Hill.  When you get a chance later, please google Joan Baez, Paul Robeson or ever Bruce Springsteen's version of this song.  And here's my own version of it -- sorry in advance for singing off-key."

And then it was time for my big finale.  Good grief, was I actually going to do this?  Make a fool of myself in front of the remaining 30-odd delegates?  The Korean guy had already left but the South African guy was still hanging in there.  Here goes nothing.  Break a leg!  And why not.  Syria has excellent free healthcare.

Ye cats!  People actually applauded!  "And the Oscar goes to...."  Oops, wrong dream.  I just hope that Joe Hill and The Boss might be proud.

PS:  I'm saving you the trouble of googling "Joe Hill".  Here are three different versions.  You can thank me later.

PPS:  Did you know that Dubai is currently going all out, no holds barred, spending billions and billions of dollars on its fabulous new "Dubai World Expo 2020" which starts this October -- and yet the UAE just voluntarily allied itself with America's rabid war-mongering regarding attacking Iran (always a bad idea -- just ask the Iraqis).   https://www.expo2020dubai.com

How can Dubai possibly expect to lure people into visiting its Expo 2020 when the UAE seems determined to hold it in the middle of a freaking war zone???  It makes no sense at all -- but then nothing else that America, the Saudis, various European colonialists and/or the Zionists have done in the Middle East during the last 100-odd years has made any sense either.  https://www.cbsnews.com/news/mike-pompeo-on-face-the-nation-secretary-of-state-says-attack-on-saudi-oil-plant-was-act-of-war-by-iran/

Stop Wall Street and War Street from destroying our world.   And while you're at it, please buy my books.  https://www.amazon.com/Jane-Stillwater/e/B00IW6O1RM
Posted by Jane Stillwater at 1:37 PM