Have you ever been to our nation's capital?  If not, please consider getting your arse over there ASAP.  So much to see!  Unbelievable.  You could spend a whole year just going to museums here and still not have seen everything!

Even after factoring in the current cannibalistically-insane rate that our federal government is violently stripping America's infrastructure, park services and cultural glories of their funding in order to build even more grisly "Wars and Walls," Washington DC today is still totally awesome -- even if not for much longer.  https://www.nbcnews.com/leftfield/video/federal-wildlife-refuge-areas-are-cleared-for-border-wall-1465712195955

I recently spent a few days touring the U.S. Holocaust Museum and the National Museum of the American Indian.  Those two museums were both very similar -- and also very different.
The U.S. Holocaust Museum is devoted  to chronicling the inexcusable horrors of the systematic genocide of Jews in Nazi Germany -- and this museum rightfully reminds us that genocide is a bad thing.  And one of the exhibits there that moved me to tears was the exhibit commemorating the heroic Jewish resistance fighters.  They risked their lives over and over again fighting for justice and against fascism.  So many of them were tortured and murdered.

Then I moved on to the American Indian Museum -- same story there.  Genocide on a grand scale.  Millions of Native Americans murdered in cold blood.  But there was one big difference between the two museums.  When the Jews fought back against the evil Nazis, they were called resistance fighters and heroes.  But when the Natives fought back against genocidal attacks by evil Americans, they were given no place of honor in the American Indian Museum.  They were not considered heroes.  In fact, they were barely mentioned at all. 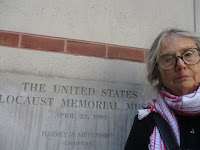 There was only a very small collage-type thingie in a back corner of the fourth floor of the museum that mentioned a few Native "activists" and the 1973 protest at Wounded Knee.  Custer's last stand was mentioned.  And there was just one mention in passing about the American Indian Movement -- but nothing at all about Leonard Peltier, the resistance fighter who defended his people from a deadly FBI attack and who is now serving his 44th year of a life sentence in some lonely Florida prison for a crime that he didn't commit.  https://www.penguinrandomhouse.com/books/322000/in-the-spirit-of-crazy-horse-by-peter-matthiessen/9780140144567/

But let's move on.

There is yet another kind of genocide going on in America today -- or should I say "femicide".  Apparently it is totally legal, even today, for any non-Native to enter any Native reservation and then murder or rape or kidnap any Native woman or child who catches his eye -- and get cleanly away with it because tribal police on American Indian reservations have no jurisdiction to arrest any non-Native.

So while I was at the American Indian Museum, I suddenly found myself in the tragic midst of the REDress Project -- dozens of empty red dresses, swaying tragically in the wind and rain, symbolizing the thousands of raped, maimed, murdered and disappeared Native women on reservations across America today.  Something like 95% of these heinous crimes are committed by White men.  Not American Natives, not hapless immigrants, not members of M-13 gangs -- but White men.  White men.  Homegrown terrorists.

At a symposium entitled "Safety for Our Sisters" held at this museum, we were told that officially almost half of Native women have been abused or raped or disappeared.  "It's actually closer to 87%" said one speaker.  Native women have become an endangered species in America -- and only Congress can solve this problem.  But Congress is too busy reveling in its sick and addictive love affair with Walls and Wars.

Here are some videotapes from this eye-opening symposium:

Marita Growing Thunder on the important role of culture:  https://www.youtube.com/watch?v=yHj3VuDY5iA

The grim history of all these many centuries of violence and genocide against Native Americans is just pathetic and sad -- that White Americans seem to value money and greed and power over any kind of humanity, Christianity or love of our fellow human beings.  The Jewish Holocaust tragedy lasted a few shameful decades before it was forcibly halted.  The Native American genocide has gone on for centuries and is still going on today.

Unless of course we can take a page from the Jewish (and Native) resistance fighters and resist.  Resist injustice.  Resist fascism in our very own government that is supposed to belong to us (but doesn't).  Resist corporate greed.  Resist colonialism.  Resist bigotry.

For centuries it was mainly the American Indians who suffered from genocide by American colonialists -- but now it is the Natives of the entire world who are also facing calculated extinction by corporate America's bottomless greed.  But always remember.  "What goes around comes around".  https://www.thisisinsider.com/migrants-detained-under-el-paso-bridge-border-patrol-surge-2019-3

Isn't it time for all of us to start righting these horrendous wrongs?  Joining our Native brothers and sisters in seeking justice and morality?  Non-violently of course.  "But why should we do this non-violently," you might ask.  Why?  Because all human life is sacred.  Because why would we ever want to become like Them?

Posted by Jane Stillwater at 9:16 AM