Post-its & pizza: My visit to our Congressional office buildings in DC

How the freak did I end up totally lost and stranded in the sub-sub-basement of the Rayburn office building in Washington DC last week?  Long story.  I was actually trying to find the offices of Congressional Representatives Alexandra Ocasio-Cortez and Ilhan Omar so I could shake their hands and tell them how wonderful they were -- but got seriously distracted by the temptation of gluten-free pizza on offer in the congressional cafeteria instead.  Unlimited toppings!  Yummers!

While waiting for my order to finish baking, I asked several pizza-eating Congressional aides for directions regarding how to get to AOC's and Omar's offices, and one of them told me to take an elevator down to the connecting tunnels that run beneath the Rayburn, Cannon and Longworth buildings -- but I must have pushed the wrong button because I ended up lost in some dark spooky narrow sub-sub-basement hallway littered with unwanted office furniture and black garbage bags.  But that was okay because I still had my pizza-to-go so I wouldn't starve before someone found me months later. 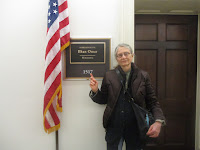 Seeing that I was buried in the bowels of Congress already, it seemed appropriate to start contemplating the actual underground nature of our government and its tenancy to bury inconvenient facts and hide corruption (as well as unwanted furniture) out of sight of us taxpayers -- stuff like how lobbyists run Congress, how the Pentagon "misplaced" 21 trillion bucks but wasn't even investigated and how Zionists and Saudis are the real powers behind the throne in America these days.  https://www.commondreams.org/views/2019/04/18/nearly-100000-pentagon-whistleblower-complaints-have-been-silenced

But then a middle-aged bureaucrat in a grey flannel suit wandered by and showed me the light -- down four corridors, up three staircases, through two doors marked "employees only" and onto an elevator going to the second floor of Longworth.  Or was it Cannon? 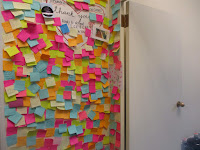 In any case, I found Rep. Omar's office first and shook her aide's hand, shook her other aide's hand and also signed the guestbook.  "Keep up the good work!"  Top government officials who happily commit genocide for fun and profit need to get a reality check every so often, but that clearly hasn't happened in DC since before the Korean and Vietnam "wars," back in the dark ages when America really was truly "great" -- at mass murder.  But Omar is definitely calling their bluff now.  No wonder the powers-that-be hate her.  https://www.nbcnews.com/politics/congress/rep-tulsi-gabbard-eviscerates-trump-saudi-arabia-s-bitch-n939011

"Sorry, we've run out."  So I signed the guest book instead.  Yay!  I also love Alexandra Ocasio-Cortez!  We need far more ex-waitresses like her in Congress.  And also a lot of former bus-drivers and teachers and farmers and all other kinds of salt-of-the-earth types as well.  https://www.teenvogue.com/story/alexandria-ocasio-cortez-powerful-video-vision-of-green-new-deal-future

Then, feeling a bit like that guy in Dante's Inferno, I descended back down into the Congressional tunnels and trudged off to the Library of Congress to explore its amazing resources (and restrooms).  Gotta love touring Washington DC.

Stop Wall Street and War Street from destroying our world.   And while you're at it, please buy my books.  https://www.amazon.com/Jane-Stillwater/e/B00IW6O1RM
Posted by Jane Stillwater at 10:59 AM