From Nazis to Netanyahu: How did things go so terribly wrong?

"Love your hat!" I said to the grey-bearded Hasidic rabbi next to me as we stood in front of the White House the other day.  We were both preparing to march up New York Avenue to the DC Convention Center where members of the American Israel Public Affairs Action Committee (AIPAC) were happily doing brunch and getting ready to listen to their hero Bibi Netanyahu spew out his favorite brand of nationalism and hate.  https://mondoweiss.net/2019/04/why-glad-netanyahu/ 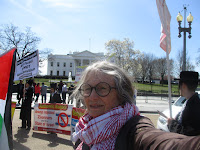 "My father died in a Nazi concentration camp," said the old rabbi, "and we Jews all vowed 'never again'.  And yet here we are, 75 years later, and now it is Zionists instead of Nazis who are running concentration camps."  The old rabbi sighed.  "And what also gives me big problems today," he continued, " is that when people on the street see me in my traditional Hasidic garments, they frown and avoid me because they think that I myself support Zionist atrocities -- but the Zionists, the real troublemakers, are all wearing suits and trying to fit in.  And the irony of this is that these Zionists don't even represent Judaism at all."

Yep, the old rabbi nailed it.  Nowadays Zionists are rabidly claiming to be Jews -- but only after having disdainfully discarded Moses, the Ten Commandments and a goodly chunk of the Torah.  That's totally absurd.  And yet Hasidic Jews, not Zionists, are paying the price for haters like Netanyahu and Trump.  And Jews from Poway to Pittsburgh are paying a terrible price too.   https://www.latimes.com/local/lanow/la-me-poway-synagogue-shooting-20190427-story.html

To paraphrase Tupac, "The hate that Zionists give screws up real Jews." https://www.youtube.com/watch?v=roR6h03kw7I

And America's so-called Christians aren't doing much better at representing Jesus either.  "Sanctuary Cities."  OMG, that's what America's current shamelessly un-Christian regime is now calling all those miserable concentration camps for kidnapped babies which now fester away at our southern border like open sores.  That's just like, back in the day, when Nazis declared that Theresienstadt, their fake "Model Town" concentration camp for Jewish artists and musicians, was a "cultural center" -- just before sending these same talented Jews off to the ovens, playing their violins as they went.  https://chicago.suntimes.com/columnists/donald-trump-civil-war-in-yemen-libya-forgotten-wars/
Recently I joined some Palestinian genocide survivors, some actually-moral Americans and a bunch of Hasidic Jews as we met near the White House, marched up New York Avenue and picketed AIPAC's annual convention -- filled with Zionists who have been influencing our federal elections ever since before Eisenhower and Johnson.
And please don't try to accuse me of anti-Semitism either.  As the old rabbi pointed out, real Jews try to obey the Ten Commandments.  Real Jews try to seek justice.  And real Jews don't run concentration camps like Gaza -- just like real Christians don't run concentration camps like the one in Tomillo, Texas.
"Over the centuries," the Hasidic rabbi said, " Anti-Semitism has caused much bloodshed and right-thinking people recognize how tragic it is.  But the term is often used incorrectly today -- abused to promote people's agendas.  Zionism isn't Judaism.  It's nationalism."  And the absolutely worst sort of nationalism too.  Colonialism, power grabs, brutality, really bad stuff.  Not religious at all.  https://mondoweiss.net/2019/04/approached-resolution-settlements/
"Encouraging the conflation of Zionism with Judaism also encourages hatred toward the innocent -- and the result is that real Jews end up being the target of anger over actions perpetrated by Zionists, supposedly in the name of Jews."  That's so unjust.  For 75 years now, Zionists have been violently stirring up hatred for Palestinian Christians and Muslims.  The result?  Zionist "settlers" feel free to murder and plunder at will.  And after 75 years of Zionists trumpeting hate speech, the whole Middle East is now in flames -- and domestic terrorists also run wild in the United States.  The hate that Zionists give screws up all of us.
"And this is why we are marching here today."  Go, you!  Justice is always a good thing.
"But, Jane, why are you being so especially hard on the Zionists," you might ask.  No.  It's not just them that I'm being hard on.  I also resent all those un-Christians in Europe and America who pretend to worship Jesus and yet murder and torture others in Jesus' name.  Or those un-Muslim Saudis who finance ISIS and fire-bomb babies in Yemen.  Mohammad (PBUH) would never approve of that.  So why should I give un-Jews a pass just because they brutally colonized Jerusalem?  Obviously I don't.
How to fix this problem?  The problem of false propaganda turning religions into tools to gain power and greed?  Easy.  Demagogues and power-hungry Calf-worshiping blasphemers need to reassess both their methods and their goals.  When a group's goal is to dominate the world and make everyone else suffer, they really do need to stop calling themselves "religious".  https://www.salon.com/2019/04/21/reporter-sharmine-narwani-on-the-secret-history-of-americas-defeat-in-syria/
The real goal of truly religious people is to be kind, loving, compassionate and helpful.  But Zionists and un-Jews, just like their counterparts the un-Christians and un-Muslims, simply aren't any fun.
To quote Gloria Steinem, "Whenever one person stands up and says:  'Wait a minute.  This is wrong,' it helps other people do the same."  I stood up with the Hasidic Jews and the Palestinians on that march -- and had fun doing it too.  Plus it's gonna be really hard to accuse these Hasidic Jews, marching in full regalia down New York Avenue, of being anti-Semitic or even self-hating -- but I imagine that Netanyahu and AIPAC will find some way to do it anyway.  But the friendly grey-bearded Hasidic rabbi I marched next to sure didn't look like an anti-Semitic self-hating Jew to me.

PS:  "Why do religions even have such strong laws to support ethics?" asks author Barbara Ehrenreich.  "Because humans need some sort of ethics touchstone in order to survive."  If only bullies, corporate shills, armed forces and corrupt regimes rule the world, then the human race is doomed.  Hence guidelines like the Ten Commandments and the Golden Rule are necessary -- unless of course you relish the idea of becoming toast.  Which I don't.  http://barbaraehrenreich.com/living-with-a-wild-god/

So.  If our leaders are liars, cheats, torturers and bullies, then it's time for us all to stand up and have our objections counted -- or else go down with their sinking ship.

Stop Wall Street and War Street from destroying our world.   And while you're at it, please buy my books.  https://www.amazon.com/Jane-Stillwater/e/B00IW6O1RM
Posted by Jane Stillwater at 12:21 PM