"You absolutely must go visit Frederick Douglass's house while you're here," said the friend I was staying with in Washington DC.  "They've turned it into a museum.  It's totally amazing."  http://www.frederick-douglass-heritage.org/cedar-hill-house/ 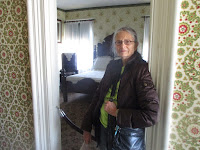 So I took the Metro to Anacosta, trudged through yet another of Washington's rapidly-gentrifying ghettos and finally found Frederick Douglass's old-fashioned home perched high on a hill overlooking DC.  "Douglass was born a slave," said our tour guide.  "His mother had been sold down-river.  He was whipped and beaten and starved as a child; overburdened and overworked.  His back was covered with deep scars from the lashes.  He stole food scraps from the Big House's garbage just to stay alive, was given one gunny-sack a year for clothing.  No one taught him to read."  Huddled naked and alone.

And yet this poor abused and tortured slave child grew up to be one of the finest orators and statesmen in America.  Sounds like a Marvel to me!

I looked at Douglass's original piano, his original writing desk, his parlor and his bedroom.  I saw the exact spot where he suddenly collapsed of a heart attack and died at age 74.  (Good grief how I hate it when people use that phony term "passed away" like somehow death doesn't really exist if you only stop using the "D' word.  But everybody dies.  Stop trying to sugar-coat it.  When I die, I wanna be D.E.A.D. -- not just "passed")

Our little tour group tromped up Douglass's back stairs and tromped down his front ones.  "How the freak did he do it?" I asked our guide with tears in my eyes.  "How did he even survive being a slave -- let alone become an advisor to presidents, an ambassador to Haiti and one of the greatest men of the 19th Century?"  The guy must really have possessed superpowers.

And Douglass was also the first Freedom Rider.  For over 60 years he constantly fought against Jim Crow laws in the brutally-segregated and un-Christian South.  "Dozens of times he would buy first-class tickets on railroads, attempt to take his seat and then be cruelly beaten, spit upon, handcuffed and/or jailed every single time."  Can Captain Marvel do that?

On the very day that he died, America's real Captain Marvel gave a young Black man some very good advice.  "Wherever you see injustice happening, then agitate.  Agitate.  Agitate."  And, boy howdy, do we have a hecka lot of injustice in America right now too.  And Douglass's most prescient advice to those of us today who also love justice?  "Power concedes nothing without a demand.  It never did and it never will".  It's time that we too demand justice as well.  Jesus did it.  Nathan Hale did it.  Crazy Horse did it.  Douglass did it.  Julian Assange did it.  A.O.C. does it.  We can too.  "Agitate.  Agitate.  Agitate."  https://readersupportednews.org/opinion2/277-75/55991-rsn-the-julian-assange-case-revealing-war-crimes-is-not-a-crime

Right now America desperately needs heroic men and women who will stand up for justice like Douglass did in the past.  We need them now more than ever.  Will another Captain Marvel like our own Frederick Douglass please stand up?  Yes, I am talking about you -- and, yes, I am even talking about me. https://www.chron.com/news/houston-texas/houston/article/Eleven-year-old-ordered-deported-without-her-13760566.php

Stop Wall Street and War Street from destroying our world.   And while you're at it, please buy my books.  https://www.amazon.com/Jane-Stillwater/e/B00IW6O1RM
Posted by Jane Stillwater at 12:38 PM