Syria's Assad & Venezuela's Madero: Two guys we are spozed to hate but shouldn't

"Everyone in Syria really loves President Assad," I keep telling anyone who will stand still long enough to listen -- and yet almost nobody believes me.  Even my FaceBook friends are fairly tired of me always getting in their faces about the virtues of Bashar Assad.

"But Assad is a dictator!" they always parrot back to me in reply.  Now where did they get that idea?  I'll tell you where.  It comes from public relations firms such as Omnicon, Hill & Knowlton, WPP and the Rendon Group -- the very same folks who brought us that messy "war" on Yugoslavia, that brutal "war" on Libya, that sleazy "war" on Afghanistan, that trumped-up "war" on Iraq (twice), those cruel proxy-wars on Palestine and Yemen, the murderous "wars" on Central America and even America's future wannabe "wars" on Venezuela, Russia and Iran.  https://caitlinjohnstone.com/2019/02/14/ilhan-omar-shreds-elliott-abrams-on-the-house-floor/?fbclid=IwAR0rPj8a7OFuM-4fGB5Nqn8LPjFWVYdkHbTBtarDPgC3RvjY9ckPGKfeZ9Q

And Americans just keep falling for it every freaking time.

These public relations firms are really that good -- they're even better than Goebbels.  Much better in fact. 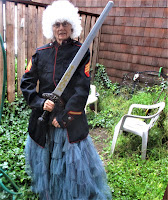 How many times have these PR firms spent billions of dollars convincing Americans to run off to the mall, click on Amazon (or send Lockheed-Martin a huge check) in order to buy stuff that they really didn't want -- or need?  Including fake wars?  And yet Americans still fall for it every time, still get sucker-punched every single time, either at the mall, online -- or at the Pentagon.  https://www.newyorker.com/magazine/2019/02/18/private-mossad-for-hire

I was an election observer in Syria in 2014, five long hard years ago -- long hard years for the Syrian people as they struggled and died in order to keep Syria from becoming yet another ISIS and al Qaeda stronghold like Libya.

Hell, even the Syrian Kurds prefer Assad.  And what do the Syrian Christians have to say about Assad?  "He is our person."  Even the Sunni Muslims love him -- and that's a hard sell.

I recently e-mailed a Syrian friend of mine living in Aleppo.  "Who would you prefer to be your president?" I asked her.  "Assad or Trump?"  And what was her instant reply?  A huge yellow emoji -- laughing its head off!

Yeah, I know.  It really is hard to convince Americans that they are being played.  "Assad is a dictator.  He gassed his own people," they constantly parrot back to me.  Blah blah blah.  But still.  I still can't resist trying to tell people the truth.  Somebody's gotta do it.

PS:  And now folks like Omnicon, Hill & Knowlton, WPP, the Rendon Group and all the rest of those sleazy con-men are now busy wasting our tax dollars on telling us how to think about Venezuela too.  "Madero is a corrupt bum.  Our guy is a God among men!" they constantly tell us.
Hell, nobody in America (or even in Venezuela) can even remember what their guy's name even is.  And Venezuelans also love Madero -- if for no other reason than they would greatly prefer to keep their own oil to themselves rather than be forced to hand it over to Exxon and John Bolton.  Not to mention how many billions of dollars this phony "war" is gonna cost us taxpayers -- but with not a penny coming from Bolton or Exxon.  https://www.reuters.com/article/us-venezuela-cuba/cuba-charges-u-s-moving-special-forces-preparing-venezuelan-intervention-idUSKCN1Q31RU

Stop Wall Street and War Street from destroying our world.   And while you're at it, please buy my books.  https://www.amazon.com/Jane-Stillwater/e/B00IW6O1RM
Posted by Jane Stillwater at 11:47 AM