But then we have rogue states who use religions to do bad.

Take America for instance.  Who ever heard of a good Christian nation that would sanction torture, fight like the Devil himself for the freedom to slaughter as many civilians in the Middle East as humanly possible, advocate racism, steal from the poor in order to give to the rich and tear babies from their mothers just because said babies were brown instead of white?  "America, America, God shed His grace on thee..."  Er, no.  God does not approve this message.  Not at all.  https://www.mintpressnews.com/us-troop-count-in-syria-jumps-by-50-percent-since-trumps-withdrawal-announcement/254681/

Colin Kaepernick, even though he's only yesterday's news cycle (yawn), is probably one of the last true Christians in America today.  Kaepernick was right to take a knee in the face of all this American barbarism.  Jesus woulda taken a knee too!  Bad, bad, bad.

And then we come to Myanmar.  American hearts bleed for the poor Rohingya Muslims who are systematically being slaughtered there.  And yet Myanmar is a Buddhist state.  "Hey, Buddha, when did you ever teach that sort of stuff?"  Er, uh, never.  Yet another prime example of using a good religion to do bad.

Not to mention the notorious Zionist Israelis, busy giving Judaism a very bad name.  Slaughter in Gaza.  Injustice in the Occupied Territories.  Prison camps, torture, propaganda.  "Come visit lovely Jerusalem," the TV ads tell us -- unless you are Palestinian of course.  Palestinians only have bad things happen to them there.  No pretty girls on beaches for them.  https://mondoweiss.net/2019/02/settlements-alienated-eizenstat/


Zionists get approximately eight billion dollars from the United States every year in order to protect Zionists from Palestinians.  That means that each and every live Palestinian is worth at least one-point-three million dollars to Zionists -- especially if said Palestinians dare to sass back.  So why commit genocide against these Occupied geese who are laying such golden eggs?

Dontcha just wish that we too were worth one-point-three million bucks each to Congress!

And here's another one of the worst offenders.  Didn't Mohammad (PBUH) tell the Saudis to respect and protect other Muslims?  The Prophet never, ever said anything about making an exception for Yemenis, Iranians, Syrians, Lebanese, Libyans, Iraqis -- or any Muslim who has the nerve to crave just a little bit of democracy in The Kingdom.   Mohammad (PBUH) never, ever said, "Off with their heads!"  Definitely breaking bad in Saudi Arabia these days. 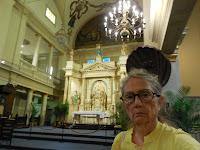 Comparative religions 101?  What have we learned?  That many state religions can (and do) lead us down the garden path to corruption, sadism, greed and stupidity in God's name -- if we are not vigilant.  And apparently nobody has been vigilant in America, Saudi Arabia, Israel or Myanmar for a very long time.

God must be very pissed off.

Assuming that there even actually is a God.

But if there really is one, then He is as guilty as the rest of us for not smiting down all this hypocrisy and all this other just plain evil stuff done in His name.  The Golden Calf is clearly running the show these days.

But the story doesn't have to end here.  We ourselves can simply ignore the bad guys who have seized our temples, mosques, synagogues, pulpits and pews.  We can pray on our own freaking knees, take our own religions to heart and become good Christians, Jews, Muslims, Buddhists or whatever instead -- all by ourselves.  Hell, we can even be atheists -- as long as we work to do what religions were invented to do.

"And what exactly is that?" you might ask again.  Pay attention here!  Religions are supposed to help us be good!  Jeez.

Stop Wall Street and War Street from destroying our world.   And while you're at it, please buy my books.  https://www.amazon.com/Jane-Stillwater/e/B00IW6O1RM
Posted by Jane Stillwater at 10:47 AM