The Raiders' last game of the season was on Christmas Eve this year.  "I really really really want to go see that game -- before they sell out and become the Raiders of the Lost (Vegas) Ark instead." I told a friend.  "But I just can't afford a ticket."  But I got on the BART train to the Coliseum anyway.

Everyone on BART was all dressed up in silver and black.  I pulled out my sign.  "Extra free ticket please?"  Then a man sitting next to me actually smiled, nodded his head, searched through his pockets, pulled out a $130 ticket and handed it to me.  Wow!!!  Pure joy.

But wait.  It gets even better.  The game itself was amazing.  Raiders vs. Broncos.  But far even better than that (and even better than the Raiderettes' complex dance routine at half-time) was just hanging out in the stadium and doing some heavy-duty crowd-watching.  I've never done such serious people-watching in my life.

The crowd was pure Oaktown at its best.  And at Raiders' games here in Oakland, Black and Brown men, women and children finally find themselves in a majority for once in their lives, cheering for their home team, big smiles on their faces too.  Pure joy in their hearts as well.  63,132 of them.  I fit right in.

Best Christmas Eve ev-ah!
Plus the Raiders won too.

Maybe we could beg the team's owners to keep the Raiders in Oakland where they belong?  Money isn't everything, you know.  Happiness also counts a lot.  Or am I just being naive? 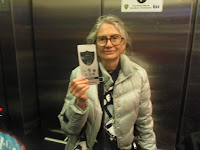 PS:  "But aren't Black people also a majority in their own ghettos," some historically-unaware grossly-insensitive person might ask.  Seriously?  Of course Black people are also a majority in their ghettos.  Sure.  Ghettos that they were originally forced into, herded into while practically being tattooed with an IBM number, driven there against their will by Jim Crow himself.  Black people have made the most of their own bits of land, but historically ghettos were designed as racial concentration camps, segregation outposts and economic jails.  America's greatest shame since slavery.  https://www.goodreads.com/book/show/8171378-the-warmth-of-other-suns

And as for Brown people?  They are the very salt of the American earth.  They hold American society together with their ingenuity, humor and hard work.  Yet what kind of gratitude do they get in return?  Being called "Undocumented".  "Illegal."  And having their children viciously kidnapped.  That's totally unfair.   https://www.cbs.com/shows/madam-secretary/video/iSX903Bw8gQzdvMWlV3MBk_1ujdADSPI/madam-secretary-family-separation-part-1/

Stop Wall Street and War Street from destroying our world.   And while you're at it, please buy my books.  https://www.amazon.com/Jane-Stillwater/e/B00IW6O1RM
Posted by Jane Stillwater at 11:49 AM