ER blues: How giant health conglomerates are putting our emergency rooms on life-support
I'm a big fan of Gray's Anatomy, The Resident, The Good Doctor and all those other exciting television shows involving emergency-room drama -- but what really does go on in our emergency rooms these days?  It's not at all like what is being portrayed on TV.  I just chatted with an ER doctor about what really goes on in America's emergency rooms -- and apparently it's far more about greedy conglomerates, mountains of paperwork, lack of supplies, overworked staff and overcrowded conditions than it is about drama.
"Sure, doctors are paid well," the ER doctor told me.  "I'm not complaining about that because basically I'm not in this profession for the money but rather to be able to save lives and help sick people get well.  But our workload has gone through the roof lately -- yet we don’t get the extra help or resources we need to do all this extra work."
And of course the hospital administrators get pay raise after pay raise, right?  "That goes without saying," replied the doc.  "Plus we go to school and train for 30 years first -- but almost anyone with a BA and a SmartPhone can handle an administrator's job."
This doctor truly loves helping people.  "But that's not my job any more.  My job right now?  To practice medicine the way the insurance companies and the drug industry want us to.  And more and more laws keep getting passed that, while well-intentioned, result in our spending much of our time at the computer instead of at the bedside."
"Then you don't mind treating broken bones, sick babies and gunshot wounds?"
"No.  That's what we're here for.  We're doctors.  We signed on for that.  But that's not what we do any more.  Now we are just one more set of rubber stamps for our ER's true product -- administrative paperwork.  Patients line the walls of the waiting rooms, waiting for hours and hours.  We don't have the facilities to accommodate them any more because we are being swamped.  And actual hospital ERs are closing, consolidating, being replaced by so-called 'Urgent Care' clinics staffed by people with little or no training in emergency medicine."  Oh dear.

Plus I bet that no one in Hollywood is ever gonna want to make a television series called "Urgent Care". 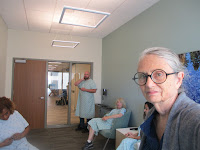 "It's all about money, no longer about health.  And because we are expected to care for anyone who comes to us we have become the final safety net for everything that is falling apart in the health care system.  Dealing with so many non-emergency issues is delaying our ability to care for the patients who have actual medical emergencies.  This is the big crisis.  It's not about money.  I don’t care about my salary.  And not about the shift to nurse-practitioners for primary care either.  I welcome that."  But?
"As more and more hospitals and ERs close, there are fewer and fewer places that are trying to deal with the constantly increasing need for emergency services, the continually more complex health issues we face, an aging population with health issues unique to themselves and the higher percentage of sick people among us.  The increasing poverty and homelessness.  The increasing number of people addicted to drugs and alcohol.  The increasing number of people with mental illness who have no way to care for themselves. We need more help, not more work.  http://time.com/2888403/u-s-health-care-ranked-worst-in-the-developed-world/
"And the response of health care organizations here in California is to reduce resources, close hospitals and reduce staffing -- all in an effort to turn a profit and maintain the salary of the administrators.  And the response of our legislators is just to shift more and more extraneous work onto the nurses and doctors already battling to provide the needed care."
Sounds like a matter of life and death.  "Yeah."  Our lives, our deaths.
Slowly the healthcare conglomerate giants are downsizing our American emergency rooms.  Will they eventually be reduced to the point where all you're gonna get when you go to one in the future will be a band-aid and a kiss on your boo-boo from your mom?
What to do about this extreme medical crisis in our ERs?  We have two basic choices here.  Either we get angry, very angry, and demand better healthcare -- or else just plan to never get sick at night or on weekends.
And what is causing even more problems here is a new law that California just passed wherein anyone who is homeless can just show up at any emergency room statewide and demand food and help with housing.  It's basically a good idea to help the homeless, but this law has not been carefully thought out.
"This new bill mandates us to distribute food, clothing and housing assistance, which homeless people are now becoming aware of and we've started to have a huge influx of people without any medical problems coming in merely to get a hot meal and a change of clothes, which we have no resources to provide to them."  Yikes!
"And how will ERs ever be able to handle all that when we don't have the personnel or the space for this extra burden?  When we don't even have the time or space to do what they are asking us to do now," wondered this overwhelmed doctor -- who already had dark circles under his eyes.  "And when, exactly, are we supposed to do our actual jobs of taking care of the sick?"
And then he clarified his fears even further.  "The main thing I am upset about is that much of what is wrong with the fabric of our society is now falling upon the ERs to deal with: homelessness, drug abuse, mental health issues, lack of access to medical care.  The ongoing response of well-meaning legislators is to mandate that the ER staff do more and more things that society itself should be taking care of, such as screening for domestic violence, offering meals, clothing and assistance with housing placement to all homeless patients and testing for hepatitis C and HIV -- yet with no accompanying funding or resources."
I'd probably end up having nightmares if forced to cope with all this.  Sucks to be an ER doctor these days.
"But what good does it do to screen for domestic abuse when I can’t offer them safety?  How and why is an ER doctor supposed to counsel people about HIV or hepatitis C?  What are we supposed to do with all the mentally ill patients who come in, sometimes several times a day, when we have nowhere to send them for help unless they are sick enough to need hospitalization?"
Perhaps we Americans need to reconsider our priorities here.  We can either ask -- force -- our government to put our tax monies toward promoting decent emergency-room care (so we don't have to die in the street) or we can continue to let our government spend our tax money on promoting endless "war" and making weapon-makers rich beyond belief as they gleefully murder millions of strangers abroad in far away places like Syria, Congo and Afghanistan -- and thus by default help murder millions of Americans here at home too.
Plus we Americans also need to put our big-boy pants on and demand that giant healthcare corporations put a cap on how much they can gouge us for when we are too weak and desperate to resist.
Which one of these options would you chose if you were sick?

Stop Wall Street and War Street from destroying our world.   And while you're at it, please buy my books.  https://www.amazon.com/Jane-Stillwater/e/B00IW6O1RM
Posted by Jane Stillwater at 1:01 PM