My report from El Paso: Beto's grassroots campaign is AMAZING!

Yesterday I probably walked at least ten freaking miles, all over freaking El Paso, arguably the friendliest city in America.  Here's me, out campaigning for Beto O'Rourke for U.S. Senate, all looking as chic as a Kardashian in my new "Beto for Texas" T-shirt.  But what impressed me most here is the height, width and depth of this campaign.  Beto's volunteers must have knocked on every single door and talked with every single voter in Texas.  At least twice.
Good grief, I surely do hope that Beto wins this election.  Why?  Because the alternative is just too ghastly to even contemplate -- six more years of Ted Cruz in the Senate.  The O.G. himself, wheeling and dealing his little heart out to make sure that our grandchildren will become extinct.  Yikes! 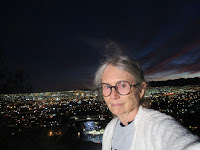 Old Gangsta Cruz is running a dirty campaign here.  You should see his commercials!  "Tough for Texas!"  Yeah, right.  At one point Cruz even actually accuses Beto of liking Bernie Sanders!  Heaven forbid.  And, like Trump, Cruz happily dog-whistles to his base -- which apparently consists of old fossils, old dinosaurs and his fellow OGs who don't seem to realize that the world as we think we know it has already come to an end and that all we can do now is evolve or die.
That's serious stuff, Ted.

Time for Texas to get off the dinosaur train and vote for Beto O'Rourke!  https://www.youtube.com/watch?time_continue=30&v=9GRt9GYKuZ0

PS:  Here are some possible campaign slogans for Beto that I thought up all by my self.
"Ted Cruz is tough on Texans -- but easy on billionaires in New York and DC."
"Beto O'Rourke stands up for the hard-working men and women of Texas.  Ted Cruz only stands up for billionaires on Wall Street and war profiteers in DC."
PPS:  Now if only Beto would actually man up and buck the horrifying riptide of Israeli neo-con AIPAC influence on our elections, he'd be just about  perfect in my eyes.  But, hey, no American politician ever does that.  Sigh.
PPPS:  I walked over to Juarez yesterday -- and have the T-shirt to prove it!

Posted by Jane Stillwater at 7:38 AM