The UN and NATO: Buyer beware!

In 1970, Nixon bombed the hell out of Cambodia.  Absolutely no good came of that.  In 2003, Bush bombed the hell out of Iraq.  Nothing good was accomplished there either.  In 2011, Obama bombed the hell out of Libya.  Another disaster as well.
And now Trump and Clinton are both claiming that if we elect either one of them to the presidency and give them a chance to bomb the hell out of Syria, Russia and Dallas, everything in America will magically become totally chill.  http://johnpilger.com/articles/silencing-america-as-it-prepares-for-war
In 1970 I found a twenty-dollar-bill on the ground and was elated.  "Should I take all my friends out to dinner at Sizzler or just pay half my rent?  Or both?" I asked myself.
In 2003, I made twenty bucks at a garage sale, enabling me to buy a nice steak at the Berkeley Bowl and go see "Whale Rider" at the Shattuck.
In 2011, I lost twenty dollars.  It must have slipped out of my back pocket when I reached for my library card.  $20 gone?  No big deal.
In 1970, the UN and NATO at least pretended to be working toward world peace.  In 2003, the UN and NATO finally showed their true colors as pawns of the American wannabe empire.  In 2011, it was crystal-clear to anyone with even toosh knowledge of American foreign policy that the UN and NATO were merely minions of Wall Street and War Street. 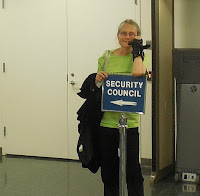 In 1970, 2003 and 2011, America continued to spend at least half of its national budget on the defense of corporate interests.  But did that huge amount also include paying for keeping NATO and the UN running too?  And for all their overt and covert military operations as well?  And also for their humongous shopping list of bombs, tanks, bribes and who-the-freak knows what all else on the side?  Probably not.
I think that it's fairly safe to say that America's "wars" of empire have pretty much gutted our economy in the past 35-odd years -- but do we Americans really need to spend all that extra money on supporting the pretense that the UN and NATO are impartial peacekeepers who are benefiting mankind -- and not just gross tools for corporate interests, war dogs and gun clubs?

Just think of what all else we could have been spending all those billions (or even trillions) of dollars on for all these years.
"Buyer beware!"
********


Stop Wall Street and War Street from destroying our world.
And while you're at it, please buy my books!  http://straitwellbooks.blogspot.com/2016/04/our-top-best-seller-right-now-is-bring.html


Posted by Jane Stillwater at 4:47 PM