Is the DNC eating its young?

Ah, the Democratic National Committee -- they have just overstepped their mandate.  Again.

Ever since the Repubs blatantly stole the 2000 election for George W. Bush and his posse of snobby elites, we've totally come to expect all sorts of flat-out shameless hanky-panky from the Grand [snake-Oil] Party.  But to see hanky-panky coming from the Dems as well?  Not so much.  Those were our guys, playing for the home team, supporting the salt of the earth, defending the working class.  We used to think that the Democratic Party was above that kind of stuff.

But not any more.  http://www.informationclearinghouse.info/article45092.htm

Now we've got the DNC fudging up elections from New York to California just like they were GOP corporate-fascist shills riding into town on elephants instead of donkeys.  Who would have thought?

"But give us an example, Jane," you might say.  Here's a good one.  The guy in charge of voting in San Diego has just admitted that ballots cast for Bernie Sanders have been changed to ballots cast for Hillary Clinton -- and they were changed by using White-Out.  Yes, you read that correctly.  White-Out.  Really?  http://sourceplanet.net/politics/sanders-ballots-covered-with-white-out-confirmed/ 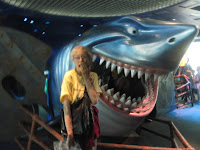 And then there is the strange case of Congressman Alan Grayson, the people's choice for Senate in Florida.  Grayson does all the things that we Democrats love -- stuff like supporting America's working class and keeping Wall Street from throwing us out of our homes.  Booyah for him!  But does the DNC support him?  Hell, no.  That would be too obvious.  Instead it supports his rival in the primary, Patrick Murphy.  Even President Obama is now campaigning for Murphy.  Huh?  http://trofire.com/2016/07/20/dem-establishment-afraid-alan-grayson-potus-makes-campaign-ad-opponent/

Murphy used to be a Republican until he re-registered as a Democrat in order to run against Grayson.  No wonder the DNC loves Murphy!

Not to mention all those WikiLeaks e-mails detailing how the DNC eats Bernie Babies for lunch.  http://observer.com/2016/07/wikileaks-proves-primary-was-rigged-dnc-undermined-democracy/

And now we are going to be stuck with either a Clinton Dynasty for president or Donald Trump.  Greatest nation in the world?  I think not.

But by far the worst of all this Democrat hanky-panky is how DNC is now eating its young -- happily chomping down on the Millennials like they were gummy bears or Fritos.  All we had to do was watch its convention to know that.  Bon appetite, DNC.  https://news.vice.com/article/new-york-lawsuit-voter-registration-problems-primary

And now the Millennials also hate you, DNC -- as well they should after the DNC has done everything it can to disenfranchise the "Bernie Babies".  But twenty years from now, when the Democratic National Committee is some sort of decrepit non-relevant dinosaur and all alone, only then will it be sorry that it ate its young.  http://www.counterpunch.org/2016/07/14/dont-call-him-bernie-anymore-the-sanders-sell-out-and-the-clinton-wars-to-come/

PS:  The DNC isn't the only one to be eating its young these days.  Congress, NATO, bankers, Israeli neo-colonialists, US-backed ISIS, Exxon, etc. are also really good at eating our young too.  Did you know that Exxon was aware of the dangers of climate change as far back as 1968?  To these elites, our children are just so many gummy bears.   http://usatoday.ddns.net/news/brave-pols-take-the-right-stand-20-lawmakers-demand-human-rights-and-justice-for-palestinian-children

PPS:  In early August, I'll be attending the American Bar Association convention in San Francisco.  Which reminds me that a hecka lot of young lawyers newly minted from law school are Millennials too -- and they are devoted to upholding the Constitution.  So, DNC, you had better watch out.  And, GOP, you too have been warned.  No more free lunch for either of you.  http://www.americanbar.org/calendar/annual.html

Stop Wall Street and War Street from destroying our world.

And while you're at it, please buy my books!  http://straitwellbooks.blogspot.com/2016/04/our-top-best-seller-right-now-is-bring.html

Posted by Jane Stillwater at 2:22 PM