I just love going to book conventions -- and I bet you would too.  As many free books as you can carry home in your suitcase?  Visiting a city that you would never otherwise consider going to?  Meeting interesting authors and hearing what they have to say?  What's not to like! 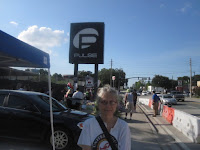 Plus, as a war correspondent, I can easily visit many of the places where all these "wars" are actually originating from.  Why go all the way to Syria or Yemen or Gaza and get shot at when it's much easier to go to the very places where those bullets that the neo-colonialists shoot are actually being made and the bombs they drop are actually being paid for instead -- the United States of America.  Plus it's a hecka lot cheaper and you don't have to fly as far.

The American Library Association convention was in Orlando, Florida this year -- and it was Big Fun.  Almost every major publisher was represented in its huge exhibit hall and there were librarians everywhere, the salt of the earth.  Surprisingly, a main publishing theme this year seemed to be books about fleeing North Korea.  And fleeing Afghanistan.  And fleeing K Street.

One especially interesting freebee was Julissa Acre's new book, My (Underground) American Dream, a page-turning story about how Acre rose from being an undocumented immigrant to becoming a Goldman Sachs vice-president.  She also talked about how undocumented immigrants pay over 20 billion dollars yearly in various taxes and Social Security charges -- for services that they can never receive.  https://www.hachettebookgroup.com/titles/julissa-arce/my-underground-american-dream/9781455540242/

And my favorite publisher of all time was at the convention too -- Soho Press.  Always the best.  Best books, best authors, best after-parties!  https://sohopress.com/

I also spent time flogging my latest book, the library edition of Mecca & the Hajj: Lessons from the Islamic School of Hard Knocks.  High point of my efforts?  When some distinguished curator of a Middle Eastern collection at a well-known university library actually showed interest in it!  "This book reads as if Mark Twain had gone on Hajj and then written up his adventures.  It's deep, meaningful -- and hilarious," I said.  He promised to read it.  Yay!  https://www.amazon.com/Mecca-Hajj-Lessons-Islamic-School/dp/1533396159/ref=tmm_pap_swatch_0?_encoding=UTF8&qid=&sr=

And speaking of war, don't let anybody fool you about Br-exit.  The Brits didn't leave the European Union because they were racist.  They left because they were sick and tired of paying for Bush's wars, Obama's wars and possibly Trump and Clinton's wars.  "NATO?  I've got better things to do with my money than use it to support Nazis in Ukraine and ISIS in the Middle East."  It's the wars, stupid.

And speaking of Br-exit, a whole bunch of Californians are also starting to feel the same way about the good old USA.  "Why do our schools have to deteriorate and our bridges crumble just because Obama or Clinton or whoever wants to sell us yet another war?"  Why indeed.  http://readersupportednews.org/opinion2/277-75/37536-the-pentagons-real-trategy-keeping-the-money-flowing

Perhaps it's time that we consider a "Cali-exit" election too.
But then I read Andre Vlechek's article on Br-exit and, as usual, he nailed it.  "Everybody in Europe now wants more, more and more.  Screw austerity!  'Give us more benefits!  Provide us with better wages, job security, and shorter working hours!'  What is shocking is that (oh so innocently!) those demands are only made for the chosen bunch – for the Europeans and North Americans – not for the rest of the globe that is actually paying the bill….  And has been paying it for hundreds of damned years, suffering horribly from everything, from slavery, colonialist plunder, genocides triggered by Europe, terrorism against its liberation struggle, to the multi-national corporate looting."
According to Vlechek, nobody mentions the cruel "austerity" programs that Syrians, Libyans, Yemeni, Ukrainians, Africans, Indonesians and Latin Americans are now suffering at the hands of Europe and America.

Nobody mentions that Europeans and Americans are complaining about their "austere" standard of living, but that it is actually based on the fact that the rest of the world is barely living at all so that Europeans and Americans can have what they have now -- only by sucking the rest of the world dry.  http://www.counterpunch.org/2016/07/01/brexit-let-the-uk-screw-itself/

Perhaps we lucky ducks of European descent should just stop whining and make sure that everybody in the entire world has the same standard of living as us -- whatever that may turn out to be.  Let's work to make the entire world "great" again.

How to do that?  You'll find all the ideas and instructions you would ever need just by going to your local library and checking out some books.  And of course you can always order my book Visions of a Lost and Future World from Amazon.  That too will help.  https://www.amazon.com/Visions-Lost-Future-World-Stillwater/dp/1532803850

Posted by Jane Stillwater at 8:25 AM