Did you know that there is a Confederate cemetery in Raleigh that is rumored to be haunted?  And right down the road from that, in Durham, is an institute that scientifically studies paranormal activity?  I've been to both places recently -- and still have almost no idea what to think about ghosts.  Do they really exist or not?

I do know that the ghost of Jimi Hendrix used to haunt my former home in Berkeley, CA, but then, hey, we all know that Jimi is capable of anything -- so being haunted by his ghost doesn't really count.

At the Rhine Research Center in Durham, I went on a tour to see what is what in the world of parapsychology.  "No X-Files type of stuff here.  We're scientists," said the Center's tour guide.  "It's the scientific study of interaction between living organisms and their external environment that seems to transcend the known physical laws of nature."  Then I was shown various psi-measuring machines and started to take notes.  http://www.rhine.org/what-we-do/current-research.html 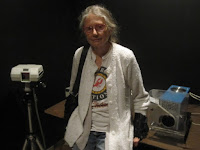 "We study telepathy, clairvoyance, remote viewing, psychokinesis, precognition and ESP.  These are all perceptive abilities.  Psychokinesis is when mind and matter interact."  True or not?  All I know is that during the tour, three of my pens stopped writing even though they were not out of ink -- and on the drive back to Raleigh, our GPS failed, our cell phones all stopped working and we ended up back in Durham.  Freaky.  And just in time for Halloween.

Next I toured the Oakwood Cemetery in Raleigh, originally established when all of the dead Confederate solders buried in the local national cemetery were dug up and thrown out into the street.  "The decaying bodies were stacked up like cordwood outside the cemetery gates and the women of Raleigh came and re-buried them all here, in some land that they purchased from a local farmer."  But of course the newly-created cemetery was segregated.  http://historicoakwoodcemetery.org/about-us.asp

Several graves at Oakwood stood out.  One of them was the really ugly monument erected over Elizabeth Edwards' grave.  "It cost $86,000," I was told.  Ms. Edwards' ghost should demand her money back.

Another grave belonged to a Cherokee woman whose husband had to fight like crazy to have her body buried here.  I guess that saying, "The only good Indian is a dead Indian" doesn't apply to Southern cemeteries -- where even the dead ones are prejudiced against.  My great-grandmother was a Cherokee -- but this woman wasn't her.  But she could have been.  My great-grandmother had been stuck out in Oklahoma as a result of the infamous Trail of Tears, which started in North Carolina.  Cherokees rightfully shoulda been Tar Heels.  Now there's a haunting thought.

Then I walked back to my motel room in the warm twilight air, past lovely old Raleigh homes flying American flags and also past one of the original Krispy Kreme donut shops, where I purchased a cream-filled chocolate-covered donut -- whose ghost came back to haunt my stomach later that night.

But are there really such things as paranormal activity and ghosts?  I really don't know -- except for the one thing that I do know.  Even though I am just a normal American person, living a typical American life, with nothing unusual about myself, over two thousand times I have woken up in the morning with an idea in my head for yet another political article that is so clear, so accurate and so correctly predictive that it's almost like it had been typed into my brain by ghosts overnight.  Now that's spooky!

And, like the ancient Greek legend of what happened to Cassandra, no one ever really believes what I predict either -- until it's too late.  Just like almost no one believed me when I wrote, back in 2006, that Madame Jane was predicting the great economic crash of 2008.  http://jpstillwater.blogspot.com/2006/11/madame-jane-predicts-how-to-survive.html

Or else when almost no one believed me after I predicted, back in early 2003, that any war on Iraq would end as badly for us American taxpayers as it had for the USSR in Afghanistan -- even though Time Magazine published my statement.  "Is it possible that Iraq will be to America what Afghanistan was to the U.S.S.R.?  The similarities are chilling."  And just look at us now, with all our money for schools and infrastructure having been poured down that rat hole connecting us to the pockets of war profiteers.

And how many times have I both whispered and screamed about the dangers of corporate greed and corporate planetary pollution?  And of course about the number-one polluter of all -- endless war.  My voice gets hoarse just thinking about that.  And yet no one has heeded that warning either.  We all will probably be dead by 2028 if we don't eliminate "war" and fossil fuel consumption by then.  Don't say that you've never been warned.  http://robertscribbler.com/2015/10/26/a-crime-against-humanity-hothouse-wildfire-smoke-sickens-500000-as-indonesian-officials-plan-for-mass-evacuations/

And most Americans still don't believe me, even after I have constantly warned them for years that their very own military-industrial complex is training, aiding, abetting and financing ISIS in Iraq and Syria, as well as supplying weapons to al Qaeda in Libya and financing the brutal lynchings of Palestinians in apartheid Israel.  http://jpstillwater.blogspot.com/2015/07/syria-where-america-drops-barrel-bombs.html  Just like Cassandra.  Humph.

PS:  Speaking of weird stuff, there is also the legend of the 36 righteous men -- who wander the world doing good deeds.  But guess what?  You don't even have to be dead to be one of them.  All you have to do is be moral.  Of course that eliminates ISIS, the NRA, Bibi Netanyahu's entire government, Bush, Obama, banksters, weapons manufacturers, child molesters, most of the Republican party and half of the Dems in Congress today.  But you and I might still qualify.  Hopefully.  http://www.redlandsdailyfacts.com/general-news/20120519/the-legend-of-the-36-righteous-men

PPS:  I did play the role of a really scary ghost on the Reelz TV show "Behind the Screams" recently.  I was so scary and ghostly that I even scared myself!  Does that count?  https://www.facebook.com/ReelzChannel/videos/10153769558264379/?fref=nf
Posted by Jane Stillwater at 11:22 AM