"Who knows what evil lurks in the hearts of men?  The Shadow knows."  And, sadly, so do I.  Practically everything there is to write about these days somehow involves absolutely cosmic Dumpsters full of evil and injustice lurking in the hearts of the various bad men currently in control of our lives. 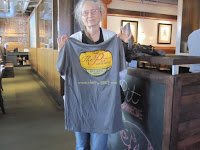 Since George W. Bush stole the presidential election in 2000, I've written approximately 2,146 articles on the subject of greed, hypocrisy, injustice, malice and evil, both at home and abroad.  Unfortunately, it looks like all these ugly human flaws will always be with us -- but good BBQ, on the other hand, could slip through our fingers at any moment.

And so here I am in Raleigh, North Carolina, home of what has been rumored to be the world's very best BBQ.  Let's go and find out.

"Clyde Cooper's makes the best BBQ in the city," I was told by one resident of Raleigh after another.  "You simply must try it!"  So I did.  And was shocked.  Frankly, Cooper's chopped meat was horrible.  Dry and sort of gray-looking even.

"Where's the sauce?" I desperately asked my waitress.  She then brought me something in a paper cup that tasted pretty much like vinegar.  Dry chopped meat, spiked with vinegar, on a dry bun?  It looked and tasted like something they might have served Yankee prisoners at Andersonville.

I live in Berkeley, California, home of really great BBQ.  Perhaps I've been spoiled.  "But how did great BBQ end up in Berkeley?" you might ask.  That's easy.  During World War II, many African-American women from the Deep South migrated to northern California to work in the local shipyards as Black Rosies.  In the Richmond, CA, shipyards, these heroic women turned out a whole new battleship every four days.  https://www.youtube.com/watch?v=hc490zRLWMA

But on the exact day that World War II ended, Henry J. Kaiser fired all of his Black Rosies -- letting them all go with no severance pay and kicking them out of their homes.

With no money to get back to the Deep South where they originally came from, many of the Black Rosies settled in Berkeley instead -- and started selling and buying BBQ.  Delicious!  Juicy, covered with a deep red sauce.  That's what I had been expecting to find in Raleigh.  BBQ like Everett & Jones.

"But have you tried The Pit over on Davies Street?" another fan of East North Carolina BBQ asked me.  No.  But while The Pit's "sides" were amazing -- biscuits, mashed potatoes, green beans and hush puppies -- their meat was also really dry and lacked that deep rust-colored tomato-based BBQ sauce that I love.  Rats.

Finally some local Raleigh BBQ connoisseur took me aside and said, "Jane, get over it.  East North Carolina BBQ just isn't the same as Louisiana, St. Louis or Texas BBQ.  We have our own style here.  Forget about Everett & Jones."  It seems that East North Carolina BBQ was developed over 400 years ago, back when tomatoes were considered to be poisonous and vinegar was used to preserve meat that had been slow-cooked in a pit.  "Hey, our chopped meat BBQ style is historic!"

And that's how I learned to like (or at least tolerate) dry chopped meat here in Raleigh.  My apologies to Clyde Cooper's and The Pit.  I just didn't know.  Plus I just found out that you can get East North Carolina BBQ in Berkeley too -- at Smokey J's, just four blocks from my home.  http://smokeyjbbq.com/menu/

However, I don't think that I will ever learn to tolerate (let alone like) injustice, hypocrisy, mendacity, greed or just plain evil.  At least I hope that I never will.

PS:  It looks like I'm being forced to go back on-topic here after all.  Still can't resist writing about injustice -- especially since yet another whole Dumpster full of it has just turned up and has been practically shoved in my face by the cable television news in my cheap motel here in Raleigh.  Who the freak would ever pay actual money to get cable TV at home?

On cable TV, I am constantly being told that our wonderful American armed forces are doing everything that they possibly can to fight al Qaeda and ISIS over in the Middle East these days.  Not true at all.

And who is better at keeping wars going than al Qaeda and ISIS?  It's a match made in heaven.  I can just see their internet dating-site advertisement now.  "Evil men seek like-minded evil men, must be fond of killing women and babies for fun and profit." http://www.globalresearch.ca/western-aid-to-terrorists-iraqi-forces-seize-us-supplied-anti-armor-missiles-from-isis-in-fallujah/5481753

Posted by Jane Stillwater at 7:38 AM