MSM Lies & Damn Lies: A report on refugees from an actual Syrian

You cannot BELIEVE all the outright lies and damn lies being shoveling our way by the western mainstream media regarding the current Middle East crisis and the refugee problem.  Let me just hit a few highlights: 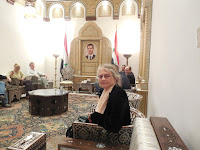 1.  The House of Saud owns over a trillion dollars worth of all kinds of horrible weapons and has been carpet-bombing Yemen continuously for the last 165 days.  Thousands of Yemeni civilians have been brutally murdered so that the Saudis can go in and steal Yemen's oil.  Yet the western MSM constantly keeps bitching and moaning about how just ten (10) Saudi mercenaries have been killed while invading Yemen and, get this, Obama himself actually sent condolences to King What's His Name.

And of course the poor victimized Yemenis are called "terrorists" and "rebels" by the MSM.  The proper term here would be "patriots," guys.

2.  Not all refugees from the Middle East are Syrians.  MSM, get a grip.  Some of them are even from Ukraine.  Fancy that.  NONE of them are fleeing President Assad.  They are ALL fleeing bad guys who have been trained and weaponized by America, NATO, Israeli, Turkish and Saudi neo-colonialists out prospecting for Lebenstraum and (of course) oil.

Syria's President Assad has nothing to do with ISIS.  He and the Kurds are the only ones actually fighting ISIS.  Everyone else is supplying ISIS.  MSM, get it right.

All these lies and propaganda remind me of what Hitler told the Good Germans back in the days of World War II.  Can you actually believe that our very own MSM is telling us outright lies, ones that they themselves actually know are lies?  Hard to believe.  But true.

And here is an eye-witness report sent to me by a friend in Syria -- totally different from the crap we are now being fed:

1.  The hysteric focus on the immigrants to Europe is only designed to create a public opinion, to support the European governments and armies to interfere in Syria, under humanitarian grounds.  It's like scaring their people "if we didn't go to war, Europe will be invaded by Muslims, Arabs, Africans, and Asians".
2.  Refugees to Europe (and North America and Australia in lesser numbers and portions) have never stopped since the end of WWII.  Sinking boats filled with illegal refugees never stopped in the last decades, and they used to be either totally ignored or partially shown at the end of the news, just to feel a little pity about that tragedy.  The whales who committed suicide at the shores would have more cameras focused on them though.  So what had changed today to suddenly focus on the Syrian refugees?
3.  A new Syrian refugee who recently made it to Germany told my friend over there, that the Syrian refugees with him were about 20% of the total refugees on the boats and trains!  The rest were from North Africa, Afghanistan, and even from Balkan states (southeastern Europe), yet the mainstream media focuses only on Syrian refugees, or worse, call them all as Syrian refugees!

Although I admit that I'm not following the news because I'm pretty busy over here with family needs and obtaining clean water or cooking gas cylinders, I do remember watching some news by coincidence showing refugees reaching different areas in Europe, and I thought that they look like Afghans or Asians. Then I guessed that they might be Kurds?

I didn't give it more attention, till I received that notice from my friend over there.  So what does it mean?  Does it mean that refugees from many other nations are taking advantage of the Syrian crisis and immigrating to Europe as Syrians?  From another source, I heard that some Lebanese are doing so right now, going to Europe as Syrian refugees.  Some Syrians families did the same in the 80s, immigrated to Sweden and pretended that they are Lebanese fleeing their civil war.
4.  Or else European governments do know where these refugees are coming from, but they are turning a blind eye, to make the numbers of the alleged Syrian refugees 10 times more?  The game of exaggerated numbers of the dead, the wounded, and refugees has been played a lot in the last five years.

When NATO interfered in Libya, they said that "Qaddhafi's army" had already murdered dozens of thousands of Libyans around Benghazi, and they had to interfere to avoid a massacre of hundreds of thousands more.  After the toppling of the Libyan state, the real numbers came out, that the casualties were around 200-250, half of them were Libyan policemen and pro-government officials.  And similar lies in numbers today about the real number of Syrian refugees to Europe is very possible.  Maybe a few years from now, the real numbers will be shown as one tenth or less than what they are shown now on the media.
5.  There is some gossip here that each European state is taking a certain type, sect, or ethnic group of Syrians, to divide them forever.  I remember that Cyprus was accepting Syrian Orthodox Christian refugees, while other states were accepting Protestants, Catholics, etc.  Syrian Circassians were asking to take refuge in Russia but Russia offered to support them to stay in their lands.  Syrian Armenians were immigrating to Armenia.

But that wasn't the same for Muslim sects.  Iran and Hezbollah for example, are supporting the Shi'a community to stay in their land and to defend it.  It was so obvious to me when ISIS attacked the Assyrians and ancient Christians in northern Iraq, and kicked them out of their homes and towns, France offered for them to come right away to its land, as if ISIS and the French government were working together to cleanse the Levant and the Middle East from its original authentic nations and to replace them with all the international trash militias they brought from overseas.

Each time a Christian village or town is attacked in Syria, France or other European states offers them safe haven outside of Syria.  That way of scattering the Syrian people around the globe is a very evil plan.
6.  There is an argument about what European states should be doing:  If they helped the poor Syrian (or other) refugees of seniors, women and children, we say over here that they are cleansing our communities and nation in a systematic pattern.

However if Europeans didn't do anything for the Syrians, we will say over here that "No one is helping or giving a hand or offering us a visa as refugees in their states".

Part of that type of problematic thinking is because of the dominating ideas of "conspiracy theories" over here.  The long history of fooling the Arabs have made them so suspicious about everything, and sometimes not a healthy suspicion either.  I think that supporting people to stay in their lands and to defend themselves against invaders instead of simply helping them to leave, might be one of the answers of that ongoing argument.  What do you think?

Me?  What do I think?  I think that if Turkish, American, NATO, Israeli and Saudi neo-colonialists would just stop trying to steal the Middle East's land and oil and stop arming ISIS and Al Qaeda, then the refugee crisis would stop on a dime.

But what do I know?

Obviously the MSM knows better than me.  Either that, or the MSM is really really really good at telling lies to us Good Germans.
Posted by Jane Stillwater at 9:53 AM