My three-month-old granddaughter has finally fallen asleep so I gotta bang this article out fast before she wakes up and I don't have a lot of time to run all this down to you ad infinitum.  Thus I'm only going to explain it to you once.  So listen up.

If you are a disenchanted western Muslim youth and you are considering running off to the Middle East to join ISIS and fight to protect the name of the Prophet, I only got one word for you.  "Forget-about-it".

Let's face it, guys.  If Mohammed (PBUH) was living today, he would be absolutely horrified by ISIS.  Horrified!  Absolutely.  Muslims hacking Muslims to death like they were bloody chickens being slaughtered for Eid and Muslim men raping Muslim women like they were cattle instead of humans?  Forget that.  Just forget it.  The Prophet would be totally appalled. 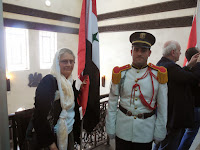 But if you really really do want to fight to protect Islam, then go to Damascus and join Assad's heroic Syrian army instead.  Or go fight for Hezbollah.  Or join the Houthi in Yemen.  Or decry the slaughter of Muslims in Gaza.  Are you pissed off at the western neo-colonialist imperialist Empire of Chaos for unjustly demonizing your religion and destroying the Middle East?  Then put your freaking anger where your mouth is.  Go fight against ISIS -- not for it.

You need another reason to fight against ISIS?  I got another one here.

ISIS was originally created in order to spread chaos in the Middle East so that western neo-colonialists could easily swoop in and take over once all those pesky Muslims who actually own the land (and oil) there have finished slaughtering each other.  And you disenchanted western Muslim youth want a piece of this?  Really?

Fighting these neo-colonialist bastards' wars for them is definitely not halal!

Anyone who does even the slightest bit of research and anyone who is even slightly intelligent enough to question all the American, Israeli, European and Saudi neo-colonial lies and propaganda that we are constantly being bombarded with has just got to know that western imperialists are equipping, training and backing ISIS -- for both fun and profit.
http://www.counterpunch.org/2015/05/22/secret-intel-reports-on-syria-iraq-revealed/

So if you are a good Muslim, don't even think about joining ISIS because the western Empire of Chaos will have all the fun -- and you will be left getting none of the Prophet.

And after the American, Israeli, European and Saudi neo-colonialist bastards get done destroying the Middle East, they are gonna turn on America, Israel, Europe and Arabia next.  You think I'm wrong?  It's already started to happen.

Oops, gotta go now.  The baby's awake.  And it's time for disenchanted western Muslim youth to wake up too.
Posted by Jane Stillwater at 3:59 PM