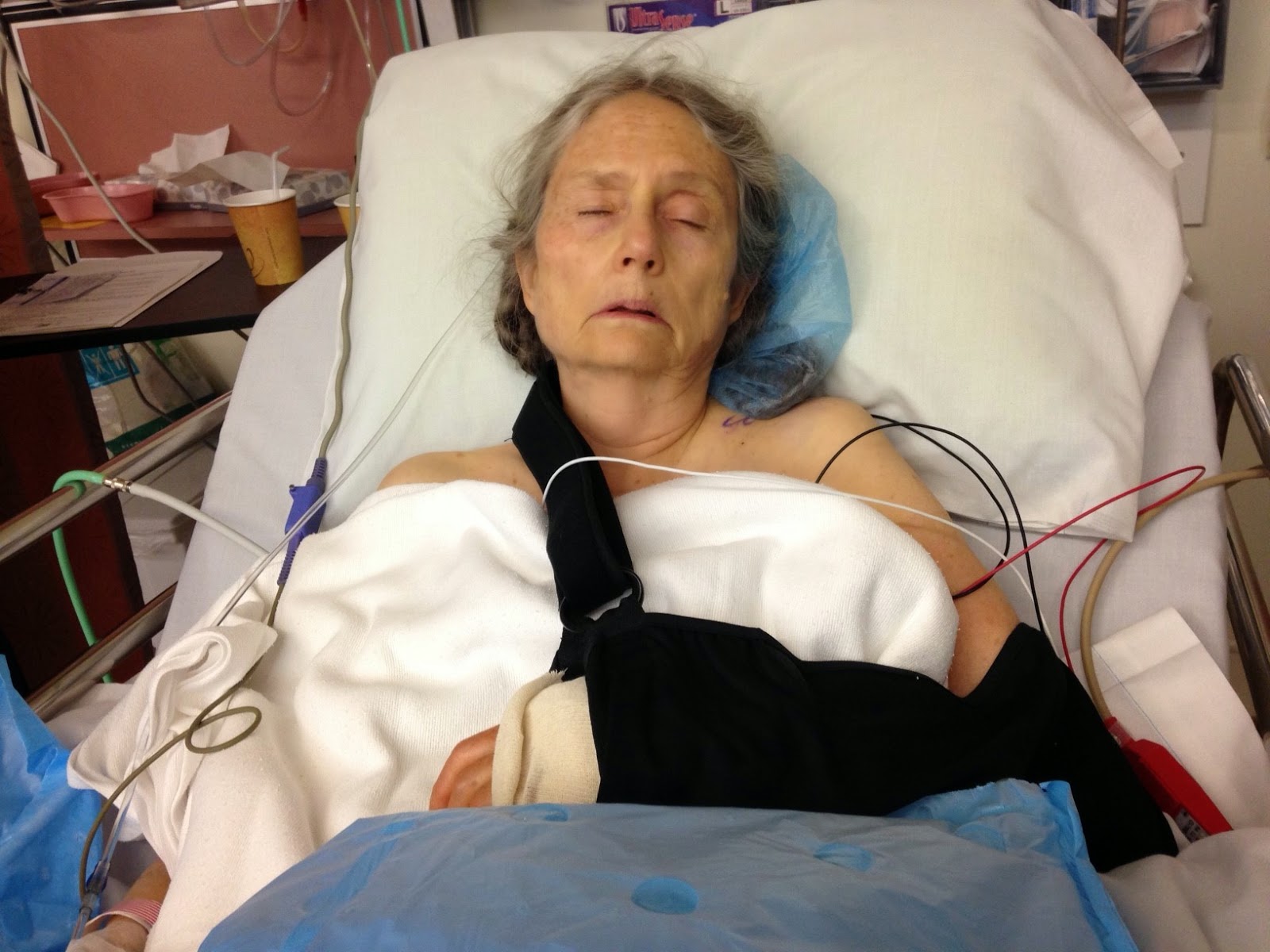 Author's note:  I haven't had much to be grateful for this past Thanksgiving because I spent that time recovering from an operation that involved re-breaking my arm, realigning the bones in my left hand and having nine pins, a bone graft and a titanium plate installed.  Ouch!  So now I'm all busy trying to make up for lost time and dreaming up things to be thankful for.  Here are a couple of items I've come up with (besides my wonderful family of course).

To paraphrase that song by Kermit the Frog, "It's not easy being old." There just aren't that many perks involved.  Your teeth fall out.  Your joints freeze up.  Say goodbye to your sex life, no matter what they claim about Viagra.  Plus no one ever invites you to parties any more and you can no longer Twerk.
However, having enough money to make yourself comfortable in your old age can surely help alleviate all those various aches and pains associated with old age -- unless of course you are an elderly widow living in Chicago and have 100K or more in your savings account.  Because if that is you, then getting old is really really gonna to suck eggs.
"But, Jane," you might ask, "why is that?"  Let me tell you.
You've heard of ambulance-chasing lawyers before, right?  Well, in Chicago they also have rich-widow-chasing lawyers.  These heartless scoundrels actually go out and scour through various tax and real estate records until they find clues to locating financially-solvent yet vulnerable senior citizens, preferably rich widows.  And then they move in for the kill.
The first thing they do is have their target victims declared incompetent -- which is not all that hard to do when you have Chicago's probate courts helping you out.  Then they get themselves appointed Guardian ad Litems for these vulnerable wealthy elders.  And then the fun part begins.
"First they pop these poor souls into rest homes where they are warehoused, starved, fed tranquilizers and ignored," said one family member whose mother had been victimized in Chicago.  "Then they sell their victim's home, empty her bank accounts and pocket the profits -- calling all these ill-begotten gains their 'fees' for services rendered.  And then, when the victim has no more money left, they then throw her unceremoniously out of the rest home and onto the cold streets of Chicago -- that is, if she is still alive."
But there is hope.  Some relatives of the victims and other conscientious local attorneys are starting to fight back.  For instance, Joanne Denison, an honest Chicago attorney with a conscience, stumbled onto this racket about three years ago by accident and tried to do something to stop these malfesiants.  "So what did she do?" you might ask.  Denison started a blog.  That's all she did.  She started a blog to try to expose some of these worst practices and blow the whistle on said legal vultures.
According to Denison's blog, "40% of all psychotropic drugs are sold to nursing homes as illegal chemical restraints, and no one ever seems to do anything about it, even though they are deadly dangerous to most elders and the FDA says they are contra-indicated or not recommended for those under 20 or over 60."
"So what happened to attorney Denison as a result?" you might ask next.  What do you think happened to her?  This is Chicago -- not Utopia.  Her attorney's license has just been suspended for three years.  http://marygsykes.com/2014/11/22/three-years-yeah-i-am-proud-to-annouce-that-the-ardc-says-i-am-suspended-for-3-years/
Now we all know that Rush Limbaugh and Fox News can tell any lie that they want over public airwaves and/or on the internet and get away with it, right?  But if you ever dare to tell the truth and expose corruption in Chicago, you had better watch out.
And if you are a wealthy widow in Chicago, you had better really watch out!
So during this week after Thanksgiving I'm gonna be super-grateful for a lot of things -- and one of those things is going to be that I'm not a widow, am not wealthy and don't live in Chicago!
"What else are you going to be grateful for?" might be your next question.
"That I don't live in Ukraine or Syria or any other foreign country that the US or NATO or BIBI has its eyes on."  If there's just one take-away that I've learned after enduring all this pain in my left arm, it's that injuries to our bodies can really really hurt, really hurt a lot.  And that a human body will probably hurt even a hecka lot more if you are hit by a NATO smart-bomb in Ukraine or if an American-made cruise missile lands on you in Gaza or if you get gang-raped by American-funded ISIS in Syria -- and have no pain-killers or hospitals or doctors to help you out like I did.

Do I think that the rich widows of Chicago have it bad?  Yeah.  But this sad injustice is almost minimal compared to having the vultures of Wall Street and War Street eying your assets and trying to steal them by torturing, raping and blowing up yourself and your kids.

At least the rich widows of Chicago don't have to worry about getting hit with NATO smart bombs or having their heads chopped off!  http://www.washingtonpost.com/opinions/katrina-vanden-heuvel-rethinking-the-cost-of-western-intervention-in-ukraine/2014/11/25/b92f8496-741a-11e4-9c9f-a37e29e80cd5_story.html
PS:  Not really sure why I'm worried about getting old.  It's probably not gonna happen to any of us anyway -- at least not while the deep-state neo-cons who now control America, Israel and NATO are all so bound and determined to try to pick a fight with Russia, China and Iran (one that they truly can't win). http://fortruss.blogspot.it/2014/11/grandmaster-putins-golden-trap.html.
And if all this current saber-rattling foolishness doesn't kill us all off in a mass wave of war-induced grim reaping, then don't forget that climate-change-run-a-muck will be sending us off to the happy hunting ground soon too.   http://www.naomiklein.org/articles/2014/08/watch-book-trailer-changes-everything-capitalism-vs-climate
Have the oligarchs of DC and NATO and BIBI totally lost their minds -- or do they just have a death wish for peons like you and me?  Either way, these malfesiants now hold all the power and the rest of us are all screwed.  http://www.spiegel.de/international/europe/war-in-ukraine-a-result-of-misunderstandings-between-europe-and-russia-a-1004706.html
But here is the good news.       Perhaps facing WW III and/or the coming climate apocalypse might end up being a good thing.  "But how?"  Because now we're all going to have an air-tight excuse to run down to the mall, max out our credit cards and buy all kinds of new gear to wear to the show.  https://hughw.net/h2o/texas-water-well-level-movie.html  How's that for positive thinking!
And here's another positive thought.  Extinction of the entire human race will surely mean that we won't have to worry about who is gonna pay for our funeral -- because there will be no one left alive to attend it!  Sorry, guys, but there won't be any "handsome corpses" on display at the local funeral chapel any more.  Rats.  I was really looking forward to that.
PPS:  I am so freaking bored from sitting around doing nothing while waiting for my arm to heal that I actually checked Thomas Piketty's new book, "Capital in the Twenty-First Century," out from the library.  If I'm going to be bored, I might as well be really bored.  http://www.theguardian.com/money/2014/sep/21/-sp-thomas-piketty-bestseller-why
"The main driver of inequality today [which appears to be wanky pseudo-capitalism run amuck] threatens to generate extreme inequalities that stir discontent and undermine democratic values," sez the dust jacket.  Just one more reason why I won't have to worry about paying for my own funeral -- I won't be able to afford it.  And neither will you.
"But if you're so bored, then why don't you just go see the film 'Interstellar' instead," suggested one of my kids.  Good idea.  Now I can go watch our planet die on the big screen instead of having to wait to watch it die in real life.

Posted by Jane Stillwater at 11:24 AM