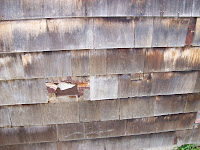 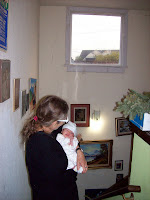 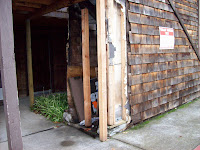 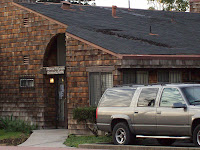 Special "Dorothy Visits the Wizard of Savo!" issue of my housing co-op newsletter (Photos are of the community room roof, dry rot, holes in the siding, the infamous window and me and baby Mena)

Savo Island Cooperative Homes Inc. is supposed to have its annual meeting and Board member election every January. And it's the middle of January already and the Board hasn't even set a date for them yet. Hello!

Our California state rules of incorporation call for Savo's annual meeting to be held ANNUALLY but that's never stopped the alliance in control of our Board before. One time the alliance actually managed to put the elections off for three whole years -- that was their greatest triumph. But last year they still managed to put it off until March. This year, however, let's surprise ourselves and see if we can have it at least by February. Hey why not.

Did you know that at an annual meeting of Savo residents -- or even at ANY meeting of Savo residents -- a simple majority of us can vote to fire the entire Board and start again fresh? Now why would we want to do that? Just because the place is falling apart? If just theSavo residents with leaks in their units this winter voted to dump this Board, I bet we'd come up with a majority in an instant. And this same simple majority can also vote to un-incorporate the co-op altogether if we want to and then there'd be NO Board at all. And it's looking more and more like that might be a good thing. Being run by a professional management company who knows what they are doing instead of by a handful of self-interest-driven amateurs? Is that really such a hard decision to make?

"I've got a leak in my ceiling," one resident told me.

"How can that be?" I replied. "You live on the ground floor." Well apparently the rain goes through a hole in the roof of the unit above him, pours down the walls and ends up in this resident's bedroom. Who knew that rain could do that?

My roof is actually holding up okay this winter but during last week's storm, my unit came within one-half-inch of flooding. I opened my front door and there was a good-sized pond of water floating up to my sill. Weren't we supposed to have a new drainage system installed back in 2001? Or did we not have the money because the Board refused to raise the rents, apparently because it would effect those of them paying market-rate rents? Oops.

What else can I tell you about the people behind the curtain who run Savo with an iron hand, apparently letting the replacement reserves slide in order to protect their own market-rate rents, breaking the bylaws whenever it suits their own interests, granting extra perks to their flying monkeys and punishing any of us lions, tin men or scarecrows who dare to open our mouths and object. "Pay no attention to the people behind that curtain!" they tell us.

The alliance didn't have time for the monthly public Board meeting in December due to the holidays but apparently they managed to find time to fit in several secret meetings instead. But do we (or the State of California laws that incorporate us and do not allow secret meetings) appreciate all their sacrifices? No.

I wouldn't mind dealing with the Board alliance so much if they were sweet and well-mannered people but they are not. At Board meetings, they take turns being argumentative, vindictive, intimidating, accusatory, abrasive, bellicose and even mendacious. They pound on the tables, say nasty things about others and generally lower the tone of our meetings. You almost expect one of them to burst out yelling, "I'm going to get you and your little dog too!"

And speaking of dogs, maybe I should ask Toto to sneak in and find out what went on at all those secret meetings. Were they plotting how best to keep getting all the best perks? Were they plotting on how best to try to drop a house on me yet again? Or were they getting ready to dump yet another management company for trying to keep them firmly upon the Yellow Brick Road to HUD good housing and not off smelling the poppies?

We sent Toto off to the meeting. Here's his report. "Arf! It looks like they are trying to dump our management company." Again? Isn't this the 13th management company they've dumped? Or is it number 14? I lose track.

"But for what reason? Why?"

But forget about Dorothy and Oz. I've got problems of my own. I need a lateral transfer to a downstairs unit because my poor knees and foot really hurt every time I go up and down my current unit's stairs. And for these documented disability reasons, I requested a downstairs unit back in November of 2006. But obviously my son, my daughter-in-law and their three-week-old baby who now live with me can't move into the smaller unit too and so they need to stay here. Plus my foster care agency wants me to start taking foster children again and I could do that if I lived in a two-bedroom downstairs unit. "But that type of transfer is illegal," I'm told.

"But the Board alliance granted a lateral transfer to one of its members based on almost exactly the same situation. Surely they will vote one for me too. Because if they don't that would be discrimination, just like when they discriminated against me on my window. They're all complaining about my window while letting the rest of Savo go to pot. You don't hear them complaining about all those wobbly stairs to second-floor units or shingles falling off the roofs or the mold. No. It's all about hatin' on my window while the rest of Savo falls apart! That's discrimination! I'll sue!"

"Yeah, right, Jane. As if anybody at Savo, HUD or anywhere else actually even cares...."
Posted by Jane Stillwater at 6:13 PM