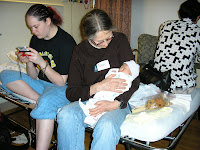 The Amazing Race (to the buffet table): One reporter's take on the New Hampshire primaries

(Photos: Me and goats in downtown Kabul and multi-tasking with Aunt Ashley, Baby Mena and Joe the proud father)

I just got an e-mail from journalist Stewart Nusbaumer, giving me his unique take on the New Hampshire primary race -- and it was so interesting and out of the ordinary that I thought I should pass it on.

Stewart, a Vietnam-era decorated veteran Marine, is one of the best -- and most colorful -- reporters that I've ever met. I first ran into him in the Green Zone press room in Baghdad. No, wait. That isn't true. I first met him in a restaurant in the infamous Chicken Street district of Kabul. Whatever.

"Jane," wrote Stewart, "you just HAVE to come to New Hampshire." For the last three weeks, Stewart had been covering the Iowa caucuses and living out of an old red van parked at a truck stop near Des Moines but this time he reassured me that he now actually had a motel room and that I could sleep on his floor.

"I can't come," I e-mailed him back. "I've got zero money and besides it's COLD in New Hampshire. But what am I missing there? What is it like?"

"None of the other campaigns I've covered are anything like this one," Stewart e-mailed me back. "You would like it here. Lots of stories to cover. Plus in the Mitt Romney campaign headquarters, they are offering free food...." Stewart knows how to tempt me. Free food? Hmmm...

"Hell, New Hampshire during primary week is more than the asshole of the political universe, it is like Vegas -- the Queen buffet town. Here there are no gambling halls, but lots of campaign offices to pig down the smorgasbord of food." Now you've got my total attention!

"But I'm a little confused by the differences between Iowa and New Hampshire," wrote Stewart. "In Iowa, the events were easy and relaxed and the press offices actually welcomed me. Here they look suspiciously at my press ID and hint very strongly that I might not be legit." If you google Stewart, you'll get at least 17 pages of stuff, including his wonderful articles for Leatherneck Magazine. But freelance journalists who are actually willing to report what they see have it really hard these days.

"I was not allowed into a Clinton event, nor into the debates. But it wasn't as bad as when I was covering the 2004 presidential election -- this was in Colorado -- when the Secret Service decided that I needed to be more closely checked out -- and ever since I have had hemorrhoids...." Yuck! "Anyway, I'm off the subject here. That steak for breakfast at the Clinton headquarters seems to have thrown my thinking off. By the way, exactly WHICH Clinton is running for the presidency? As I said, I'm a little confused. Let me get back on track."

"I interviewed one Republican candidate's spokesperson earlier today," Stewart continued, "and of course I insisted that we do it at a bar down the street and the dingbat even picked up the tab. Then I erased the tape." Ah, life in the trenches is hard.

"Currently I'm at the Wayfarer bar. This is where I first met Hunter Thompson. He got out of a car and ran into a post at the entrance and freaked out. I bought him a drink and reassured him that he didn't get clubbed, but just walked into the post at the entrance to the motel. Damn, if the walls of this bar could talk..." If they could, you just know that Stewart would be listening -- and with his tape recorder on too. This guy really knows how to sniff out a story. Getting him to write one down, however, is a whole other matter.

"Yesterday I went to a typical Obama event, and, after what I had seen in Iowa, I was expecting another pep rally. Hell, no. No students there. The man talked like a grown up. I'm trying to process all this. I see a compassion piece coming up. Or else one on campaign-trail bars." Talk's cheap, Stewart. WRITE the darn piece! You owe it to your fans. You owe it to ME, your Fan Number One.

"Hell, at a rally this morning I nearly floored Gergen from CNN. When I'm splitting between two events, don't get in my way." Did they both have buffet tables?

"Really, Jane, the difference between Iowa and New Hampshire is huge. Most of all, the slimy media has slipped onto center stage and instead of the candidates talking to voters they are talking to TV cameras. Forget those cozy living rooms in Iowa where the candidates talked to real people, now it's the animals of journalism. In Iowa I was often just one of one or two journalists interviewing a candidate, but here I get trampled by a vicious onslaught of foaming bloodhounds with cameras and booms swinging and drool splashing from their lips as they threaten any Internet journalist with instant death if they don't get out of their way. Sure I almost killed Gergen, but he deserved it. I was trying to made my way from an Obama event to the Romney headquarters before the food was all eaten up." The Amazing Race indeed. Maybe they should have a reality show just for us reporters.

"As soon as the concussion heals -- yes I got in the way of a moronic beefy ABC camera man and nearly had my head ripped off my body -- I will pound out that article, which is tentatively entitled -- well, I haven't gotten that far yet. Maybe the Edwards headquarters' pork chops will help clear up my mind." Edwards is offering free food too? Maybe I should go to New Hampshire after all....

"But if you want to get to New Hampshire, you'd better get up here quick." Stewart warned. "I'm leaving for South Carolina ASAP. Hell, it's warmer in South Carolina."

PS: Who am I supporting for president? Dennis Kucinich of course. He is the only candidate running, with the possible exception of Richardson and Edwards, who actually represents the America people and not just the rich. I'd elaborate on this more -- like how Kucinich had more electoral support than Guillani but ABC cut Dennis out of the debates yet left Rudy in -- but I'm typing this with only one hand because I'm holding my sleeping two-week-old granddaughter with the other.

PPS: Sorry, Stewart, but I'm not gonna make it to New Hampshire. I'm still saving up for that trip to North Korea in April and that trip to Burma in December -- to say nothing of trying pay my way back to Iraq. Will somebody PLEEZE send me those winning lottery ticket numbers and/or pass me some more peanut-butter-and-jelly sandwiches. Like I say, it's hard being a freelance journalist.

Posted by Jane Stillwater at 1:06 PM