March 2020: My luxurious night at the Palace Hotel
Editor's note:  Here is Chapter 2 of my forthcoming book "2020: My Year of Traveling Dangerously During the Lock-Down".  Only 15 chapters left to type up.  I can do this.  Maybe.  This chapter starts on Day 10 of the Lock-Up -- and we are now on Day 531.  Time to start typing.  What else have we got going on?
March 26, 2020:  Everything is dead as a door-nail around Berkeley due to the COV$D hysteria.  Maybe hotel and airline prices are cheap on Expedia and I can travel somewhere exciting that I couldn't previously afford.  Hmm.  "Five days in Puerto Vallarta!  Only $425 including airfare down and back!"  Yeah, but.  What if I go down there but can't get back home again?  Oops.  So guess what I've decided to do?  "For just $200, you can spend the night at San Francisco's legendary Palace Hotel!"  Now you're talking.  I booked it.  Yay!
March 28, 2020:  Packed up my suitcase this morning and here I am -- with the entire seventh floor of the amazing Palace Hotel all to myself.  And also probably the sixth floor and the eighth floor too.  Wow.  And I had practically the entire BART train to myself on the trip over to San Francisco as well.
And the hotel lobby was empty.  And the famous Garden Court was shut down.  And they even gave me a free turkey sandwich when I walked in.  And knew my name at the registration desk -- because I was the only one there.  It's like a ghost mansion here, a beautiful antique ghost.  Only not all that spooky.
I also got a free shower cap.  A $200 free shower cap.  And a big-screen TV.  "Man up, Jane," I told myself.  "You didn't come here just to watch no freaking TV."  The swimming pool is closed, however.  And they've got some weird-arse electronic toilet.  OMG!  Spoiler alert!  They even gots a self-heating toilet seat!  I could just hang out in this luxe hotel room forever -- but really should go out and explore San Francisco,  Or at least go sit in the lobby next to the Garden Court and suck in the solid-gold ambiance. 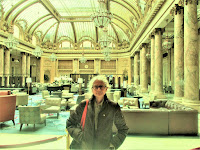 No one in the lobby at all.  I'm serious.  This place is empty as Lazarus's tomb.  Or was it Christ's tomb?  Sat on a posh velvet chair and read a book for an hour.  The concierge talked to me about the hotel.  "On an average day we would have at least two doormen, four or six bellhops and two or three concierges.  When the big conventions hit town?  Double that.  And now there are only ten employees total -- and only ten guests."  Invisible guests.
"We easily had 300 to 400 employees.  Housekeeping for 500 rooms.  Bars, restaurants.  The Garden Court itself employed 20 people in the kitchen alone."  All of that gone.  So very sad.  And multiply this domino effect for all the hotels in America -- large and small.  I don't think people realize the magnitude of this economic disaster.  He also told me about the alleged ghost of President Taft.  Apparently Taft dropped dead at a speakeasy across the street "but they smuggled him back into the hotel through a secret tunnel in order to save his reputation."
Time to stop stalling and go off to tour Chinatown.  Hopped onto the first Muni bus I saw heading north and it dropped me off right in front of the San Sun Market where I bought a duck leg.  Already cooked.  Two dollars.  Chewy.  Ate it while walking along Stockton Street toward North Beach and the historic Beatnik part of town.  Chewing on the duck leg.  Alone.  In the rain.  Feeling like a caveman -- or like Will Smith in some post-apocalyptic drama.  There's the legendary City Lights Bookstore!
Then I met my culinary downfall, an ice cream store that was actually open.  No will power as usual.  "Two scoops of strawberry and one scoop of chocolate fudge please," I said.
North Beach is lovely.  In the rain.  Huddled here with the ghost of Alan Ginsberg.  Reminding me of that life-changing moment back in 1958 when I saw him and another man walking down Grant Avenue -- and the other guy had long blonde hair reaching down to his waist.  It was a total paradigm shift for me, that men could actually have long hair.  I immediately became a Beatnik.  Changed my life.
Then the #30 Muni bus arrived and I was whisked off to Union Square.  Also deserted.  I'm feeling more and more like the star of I am Legend.  Walked slowly back to the Palace Hotel.  And on the way I discovered my true (or at least latest) passion in life, taking photographs of reflections -- reflections of The City in glass, in windows, in mirrors, on black granite walls, in puddles of water from the rain.  Good to know.  I may even hold a photo exhibit at Gallery FaceBook as well.
Now I'm back at my palatial suite with the big-screen TV and the heated toilet seat, in for the night.  Then the hard part will begin -- getting to sleep.  Wish me luck.  I will need it.  There are too many thoughts in my brain right now, going on and on and on.
March 29, 2020:  Boy did I sleep a lot last night.  Quality dreamless sleep for four hours -- but then followed by an hour and a half of buzz-kill wide-awakeness.  However.  I then redeemed myself with another four and a half hours worth of total-knock-out sleep again.  Why is all this discussion of sleep important?  Pay attention here.  Both our minds and our bodies run on sleep.
Dream report:  There was a huge high-powered attorney, larger than life, standing in the customs office at the Palestine border where I had been thrown out by the IDF three years ago.  And then, suddenly, the formidable attorney was divided into around ten little mini-attorneys, forced to dress like little old ladies -- house dresses, black socks, 1940s hairdo and all.  It was humiliating for him.  That will teach him to hang out with the Zionists who were mean to me back then. 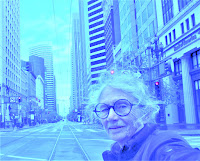 All of this good sleep gave me a fabulous idea.  Two of them actually.  First I'll go downstairs and live-stream the Glide Memorial Church Sunday service, watching it from the Garden Court!  Second, I'll offer the manager a two-for-one deal wherein I would pay for one more night if he would give me a second night for free.  Wow.  The hotel is closing on March 31 anyway.  What do they have to lose?  Then I could tour the rest of The City and eat tacos in the Mission and lunch in the Tenderloin at the Glide church.  Genius!
Well.  My generous offer was just refused.  Turned down flat, to be exact.  Hmmm.  Maybe I should actually try to dig up the freaking extra $200 in order to spend the last night at the grand old Palace before it closes -- hopefully not for good.  Nah, got nothing to pawn.  This whole COV$D lock-down is truly messed up.
And the wi-fi connection to Glide didn't work either.
And the trip back home was weird too.  More crazies than usual were out on the street -- although one group of hard-core heavy-metal Goth types looked interesting.  I almost said, "Can I take your photo," but frankly they just looked too scary.  Picturesque as hell but totally scary.  I got to thinking later, however, that they might be just unemployed bike messengers.
Waiting for 20 minutes at the Montgomery Street BART station was scary too.  Just me and four desperate-looking homeless men.  I gave a dollar to the one who approached me.  Protection money.  Buying him off.  Is this the beginning of the end of America as we (used to) know it?
April 7, 2020:  Ha!  I've re-discovered the fine art of "stay-cation"!  The Palace may have closed down, sure, but perhaps there are other local hotels.  Screw this lock-down!  Not sure if my physical health is in danger from COV$D-1984 but I know for certain that my mental health is!
My budget can no longer afford the Palace so I tried some other, less opulent hotels.  The Sens Hotel in north Berkeley?  I bartered for a better price, still being a cheapskate.  No luck there.  The Doubletree down by the Berkeley marina?  They gave me a deal.  And a giant chocolate chip cookie too.
April 8, 2020:  Soooo glad I came to the Doubletree.  Wandered down by the docks around midnight last night, under a shiny full moon.  Almost wanted to howl.  Best stay-cation ev-ah.  Except of course for the Palace.  And the historic, rambling Claremont hotel up in the hills -- which is now also closed.   What to do today?  Stroll down to the shoreline, look at the sailboats, drink tea at the marina.  Plan my next stay-cation!

Posted by Jane Stillwater at 11:34 AM