Hurricanes or COV$D: Which should New Orleans fear most? 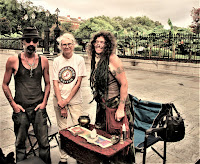 In the French Quarter, on historic Jackson Square, there were still a few palm-readers and fortunetellers left, still toughing it out in these hard economic times.  "You will have obstacles in your path but you will overcome them," said Mssr. Beau as he pulled both the Joker and the High Priestess out of his tarot deck.  With a hurricane coming and the most strenuous COV$D lock-down in America already here, I predicted that he was probably right.  And while I did manage to get out of town just hours before the hurricane hit, I also managed to get stuck in an elevator for a half-hour -- and stuck on a streetcar that broke down.   Obstacles indeed.
I also met a Cajun guy on the Canal Street bus who told me that the very best place to find authentic gumbo was in the cafeteria of the local general hospital.  Seriously?  "Best gumbo in Louisiana," he said.  This I gotta see.  Yeah, well.  The gumbo was okay -- but definitely not worth an hour's ride on the E5 bus to get there. 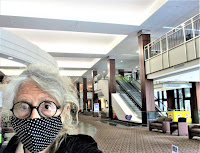 But what was even more newsworthy about my bus trip out past City Park, the Greenwood Cemetery, the Causeway and even suburban Trader Joe's?  The fact that this gigantic hospital was practically empty.  No one in the lobby, no one in the ER and almost no one in most of the corridors.  Wha?
"Where is everybody?" I asked.  "I thought Louisiana was at the epicenter of the pandemic?  And that this hospital was the epicenter of the epicenter!"  What happened?  Finally I cornered a nurses' aide and he confessed.
"We re-direct most of our patients off to one specifically-designated hospital.  Then, on the evening news, they'll make it look like all our hospitals are overcrowded and overwhelmed by COV$D cases."  Oh.  Of course.  It's the visuals that count most in Louisiana these days.  Hell, it's the visuals on the evening news that count most everywhere, truthful or not.  https://jpstillwater.blogspot.com/2021/08/new-orleans-is-dying-and-covd-is-not.html
If I lived in New Orleans, I'd be far more afraid of hurricanes (and bankruptcies and suicides and bad juju) than I would be of COV$D.
At the airport just before Hurricane Ida struck, it looked like a very organized version of Saigon in Kabul as the last plane out was being desperately boarded by refugees from the High Priestess -- and the Joker. 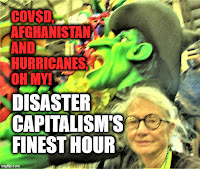 PS:  Speaking of COV$D, Afghanistan and hurricanes (oh my!), all this chaos appears to be Disaster Capitalism's finest hour.  Once again, the World Economic Forum has happily released its flying monkeys to protect its treasures -- and dropped a house on the rest of us.  https://www.barnesandnoble.com/w/shock-doctrine-naomi-klein/1101584593?ean=9780312427993

Good grief.  In order to get a video of Dr. Yeadon telling us what is actually happening regarding this COV$D nightmare, we gotta practically go on the Dark Web!   https://ok.ru/video/2555759299081

Posted by Jane Stillwater at 9:59 AM