Milwaukee & Charlotte: Our leaders have failed us

I finally broke down and took the coronavirus test the other day because it was part of a job requirement.  "Negative."  Oh.  Okay.

"Why are you so surprised?" asked the clinician who administered my test.  Long story -- but these days most of us have nothing but time on our hands so I jumped right into the tale. 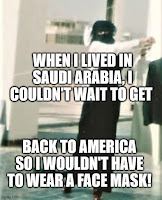 I had fun staying in haunted hotels in San Francisco, Milwaukee, Eureka Springs, Branson, Charlotte and Minneapolis -- so if anyone should have come down with COVID, it would be me."  But no.  The test still came out negative.

However.  All those glory days of coast-to-coast travel are over -- and not only because I just tripped on the sidewalk and broke my left arm.  And not only because I can't afford to travel any more.  It's mainly because I'm too worried about what will happen next -- feeling too depressed and helpless, wanting only to hide under the bed.  Only the future haunts me now.

One night while I was staying at one of those historically-haunted old hotels (was it at the Biltmore or perhaps the Dunhill or the Astor?), a rather spooky ghost in a long black robe suddenly stood at the end of my bed and told me, "They take and they don't give back."  Who?  What?  Who takes what?  "America's leaders," answered the ghost.

That makes perfect sense.  Just look at America now.  We're facing another Great Depression and scared out of our wits by a disease with a survival rate of 99.6% that only threatens the dangerously unhealthy.

Then there's all those phony "wars" since 9-11.  Blood on our hands that we can never wash off.

And now some jerk with more money than he knows what to do with now wants us to inject ourselves with god-knows-what.  "That is total craziness, Bill."  Test it on members of Congress first please.  And on yourself. 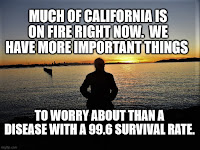 But wait.  It gets worse.  On one hand, our current president appears to be fomenting Bugaloo-Boy race-riots and cozy Q campfires in order to cover up his cheesy "America First" policy of taking from the poor and giving to the rich -- mainly himself.  And on the other hand his electoral opponent is a wannabe Globalist trying to impress the Atlantic Council and Davos with how quickly he can put "America Last" -- at our expense.

And meanwhile the entire West Coast is now on fire due to climate crisis among other things.  If only we hadn't allowed Bush to steal the 2000 election and then stood by while the Proud bugaloo Boys did their thing, we wouldn't be facing this Inconvenient Truth.

And don't even get me started on the 2020 election as both parties gear up to protest them -- no matter who wins or who commits the most election fraud.

But I did have a good time at the Milwaukee Democratic Convention -- and an even better time at the Charlotte Republican Convention (probably because all the delegates from both parties were home watching Zoom).  These wonderful "on the road" cross-country trips were my last hurrah to the America that our leaders have worked so very hard to systematically loot and destroy.

And we have let them. 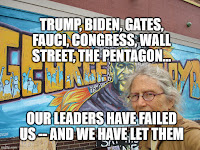 Isn't it time that we all finally shout "Enough!" -- and then start to stage economic boycotts, turn off our televisions and other hypnotic devices that chain us to a manufactured un-reality, work together locally from the Left to the Right and just simply refuse to go along with this horrid Grand Theft by leaders who care nothing about us.

Jonathan Simon reports on election fraud in the age of computers:  https://books.google.com/books/about/CODE_RED_Computerized_Elections_and_the.html?id=Ci6WzQEACAAJ

America's debasing culture of bread and circuses, masquerading as caring for the people:
Contrived Spectacles of “Protecting and Caring for the People”

George Orwell said “in a time of universal deceit, telling the truth is a

revolutionary act.”  So let us all tell the truth:  http://popular-resistance.blogspot.com/2020/09/truths.html

No second wave?  Shouldn't we be happy about that?  "The virus infection has passed through the bulk of the population as a result of wholly natural processes and evidence indicates that in the UK and other heavily infected European countries the spread of the virus has been all but halted by a substantial reduction in the susceptible population."  https://lockdownsceptics.org/addressing-the-cv19-second-wave/

Posted by Jane Stillwater at 10:38 AM