"A good Christian man."  That's the path George Floyd tried to follow in order to somehow (almost) make it through the intricate labyrinth of being Black in America -- an endless and hopeless labyrinth, brutally perfected by 400 years of slavery, Jim Crow and racial discrimination.  Always being forced to the bottom of American society no matter where or what.  https://www.nytimes.com/article/george-floyd-who-is.html

"Thug Life".  That's the path Tupac Shakur tried to follow in order to somehow (almost) make it through the intricate labyrinth of being Black in America -- an endless and hopeless labyrinth, brutally perfected by 400 years of slavery, Jim Crow and racial discrimination.  Always being at the bottom of American society no matter what.  https://www.youtube.com/watch?v=GpPbYGJRg0Q 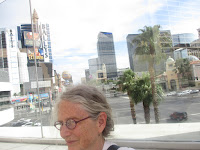 Both men did what they could to survive a life where the deck was audaciously stacked against them from birth.  Survival.  A hard taskmaster, the dominant overseer threatening Black men day and night for the past 400 years.

This constant struggle has gotta be wearing on the soul, right?  Always on the outside, never good enough, never quite fitting in.  Always in danger too, never quite safe.  In this way, George Floyd and Tupac Shakur were very much alike.

However.  Here in Las Vegas, I accidentally stumbled over a very real difference between Tupac and George:  2Pac has no monument, no memorial, not even a mural.  Even Freddie Gray has a mural.

On the corner of Flamingo Blvd. and Korval Street, Tupac was brutally murdered 24 years ago.  Case never solved. 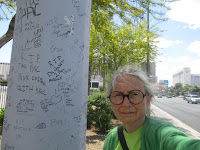 And also on the corner of Flamingo Blvd. and Korvel Street, there is a stark gray utility pole near the spot where Tupac was ruthlessly gunned down.  And on this barren utility pole, standing dismally in the hot sun on some deserted street-corner barely three blocks away from the Las Vegas Strip itself, almost a quarter of a century after Shakur's death, people are still writing touching epitaphs with black marker pens onto its stark gray paint.  "We love you 2Pac" and "Welcome to the Thug Mansion in the sky".

And yet every couple of months, Bally's Hotel, presumptive owner of the property where this gray utility pole is located, sends out a maintenance crew to sweep away all the cards, tokens and flowers -- and to re-paint the pole. 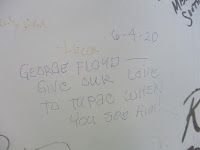 Bally's (and the City of Las Vegas as well) needs to make a better choice here.  Even our Tupac needs a memorial.  Why?  Because he too did what he could to (almost) survive being Black in America today.  And he did a memorable job of it too!

Posted by Jane Stillwater at 10:53 AM