The Forgotten: My trip to an asylum-seekers' shelter in Tijuana

The other day, my friend Ana and I hopped aboard the San Diego Trolley to San Ysidro and then walked across the border to Mexico.  Nothing could be more simple.

On the other side of the border, we found lots of taxi drivers.  Ana knows Spanish.  She bartered.  "¿Cúantos para rentar un taxi todo al día hoy?" she said.  How much will it cost to rent your taxi for a day?

First we talked with a man from Honduras.  "I fled for the same reasons as most of the men here," he told us.  "Gang violence, corrupt government, fear for my life.  If I ever go back there again, they will murder me.  Tingo mucho miedo."  He has much fear.  I didn't bother to tell him that I myself have given up fear for Lent. 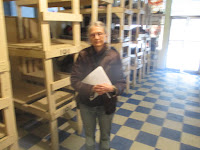 "We do the best that we can to be helpful," said the shelter's director, a kind and compassionate woman who has dedicated her entire adult life to helping those who have far less than she does.  "We used to have over 150 men here in response to the United States' recent 'Remain in Mexico' program -- mostly refugees escaping from gangs and government thugs in Central America.  Now, however, we have far less."  https://attentionage.com/2020/03/22/viral-too/

Hmmm.  I wonder what became of those missing men.  Rumor on the border has it that the U.S. has been paying to have them shipped off to Guatemala like so many packages stamped "Return to Sender".

Once in Guatemala, however, these asylum-seekers are screwed.  The only option they have left there is death -- the ultimate asylum. 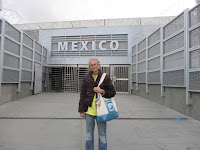 Meanwhile, back in the USA, we are all busy worrying about perhaps dying of the coronavirus (or perhaps running out of toilet paper).  But our chances of dying from COVID-19 are around 3% at most -- and even then you most likely gotta be old, obese, a smoker or in bad health in order to actually kick the bucket.  https://www.youtube.com/watch?v=JHE3OerDKEY

But in the many asylum-seekers' shelters and camps on either side of the US-Mexico border, your chances of death are much higher -- especially if you are a child in a cage.  Asylum-seekers here are constantly playing peekaboo with death.

But this ultimate tragedy no longer matters to those of us north of the border.  The American spotlight, the American news cycle has moved on.  The men that we talked to in Tijuana, collateral damage from America's brutally flawed foreign policy in Central America and the gangs that are left in its wake, are forever stuck here to die alone and afraid in TJ -- and they have all been forgotten.  https://www.sott.net/article/431559-First-Do-No-Harm-If-Primary-Healthcare-Remains-Shut-Down-Toll-on-Elderly-Will-be-Worse-Than-COVID-19

PS:  In my next article, I'll try to describe my visit to a women's asilo-buscando shelter, followed by the total incongruity of sipping margaritas on a lovely Tijuana beach -- right next to Trump's ugly Wall.

PPS:  On a happier note, at lunchtime our taxi driver took us to his favorite place in Tijuana for tacos, tamales and barbacoa.  The real deal.  I even bought extra tamales, smuggled them back across the border and had them for dinner that night at my San Diego AirBnB.

PPPS:  If everyone wore face masks for three weeks, the COVID problem would be solved, right?  Boom.  End of pandemic.  And we can make instant face masks ourselves with just a bandana and two rubber bands.  Don't have to be a narcissistic blowhard to figure this one out.  Just watch the freaking video:  https://www.youtube.com/watch?v=OvioDd6GMxU

Stop Wall Street and War Street from destroying our world.   And while you're at it, please buy my books.  https://www.amazon.com/Jane-Stillwater/e/B00IW6O1RM
Posted by Jane Stillwater at 12:46 PM