Demagogue: Portrait of an American president

I woke up this morning with the sniffles.  This is actually a good thing.  Someone just told me that having a runny nose doesn't mean that you have COVID-19 -- but only a slight cold.  Whew!  Apparently coronavirus symptoms consist of a cough, a fever and trouble breathing.

But as for all those poor innocent victims who actually do get COVID-19?  "Sucks to be you."  Why?  Because our demagogue President has ordered the CDC budget to be cut so that he'll have more money to spend on foreign misadventures.  Mussolini in Ethiopia comes to mind.   https://fortune.com/2020/02/26/coronavirus-covid-19-cdc-budget-cuts-us-trump/

Next week I'm taking a trip to Mexico but I may have to stay there forever if our demagogue President orders America's southern border to be closed.  That sounds like something Chairman Mao used to do.

Election tampering in Venezuela and Bolivia by our very own demagogue President?  Yeah.  Not to mention how he's done absolutely nothing to prevent election tampering here at home by Dark Money, Jim Crow, unverified voting machines and even the DNC.  Shades of when Idi Amim simply elected himself president of Uganda. 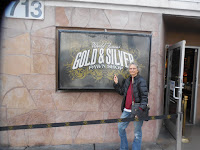 And the American economy?  It's about to crash.  Hard.  But hopefully not as badly as when Marie Antoinette said, "Let them eat cake!"  https://www.youtube.com/watch?v=uqHxmKX703M
Kids in cages?  Overcrowded prisons?  What if COVID-19 introduces itself into America's gulags -- and prisoners are trapped like passengers on the Titanic, with no place to escape?  Or consider the ever-increasing number of homeless camps in America where no one can even protect themselves by washing their hands?  Worst horror movies ever.  "Worse than Joseph Stalin's gulags in Siberia?"  Maybe not.  But close.


Our demagogue President's executive orders have attempted to exacerbate the climate crisis, muddy our waters, pollute our air, desecrate our national parks and contribute to burning down our forests.  Is he one of us Americans?  Or is he just one of the Boys from Brazil.

While posing as a holier-than-thou Christian, our demagogue President has been accused of raping women, using "escorts" and paying off prostitutes.  Even Mary Magdalene would be shocked.  Perhaps even Judas.

Corruption?  Pay for Play?  What really goes on down at Mar-a-lago?  Not even Bibi Netanyahu or Prince BnB appear to be this corrupt.

Stop Wall Street and War Street from destroying our world.   And while you're at it, please buy my books.  https://www.amazon.com/Jane-Stillwater/e/B00IW6O1RM
Posted by Jane Stillwater at 1:21 PM