The American Geophysical Union convention: 27,000 nerds -- and me

How far am I actually willing to go in order to score free chocolate chip cookies?  Good question.  Exactly how much torture am I willing to endure?  Math has always been torture for me.  STEM is my worst nightmare.  And yet here I am, in San Francisco, actually surrounded by whole regiments of science freaks!  And yet, here's me -- actually having a good time.

Even though the event is mostly sponsored by Google, Lockheed-Martin, Amazon and Chevron.

But still and all, I'm learning some really interesting stuff.  And they feed us here for free too.  Clam chowder, Vietnamese salad and beer.  "Gots any wine?" I asked.  Uh, no.  Most of these 27,000 nerds are basically grad students and twenty-something STEMers, apparently hoping to land their first (or next) job.  Tired of working for Uber.  Definitely not a wine-drinking crowd.  But they are so cute -- with their pocket protectors, electronic gadgets and nerdware.  Gotta love them.

However, a lot of these 27,000 nerds are going to invent things someday -- really important things, things that will hopefully save our lives and our planet within the next ten years. 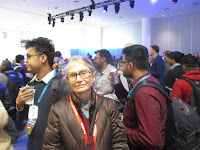 The first seminar I went to here talked about how Jules Verne had influenced the space race.  Who knew.

The next seminar was given by panel members who talked about the various ways that the federal government has tried to discourage and intimidate any discussion by them regarding our current climate crisis -- but how, heroes that they all are, they risked their jobs and their future to try to make Congress aware that corporate America is playing with fire.  "The fire next time".  Literally.

Did you know that 97% of our climate crisis is caused by human activity?  That climate change in our national parks has doubled the temperatures there as compared to the rest of the country?  That wildfires have also doubled?  That carbon dioxide is now at the highest level it has ever been since the dinosaurs went extinct?  That American Natives are ten times more likely than the rest of us to have an oil pipeline forced onto their land?  Hell, even I can do that kind of math.

Afterward I talked with one American Native presenter who had a PhD.  "How did that happen?" I asked him. 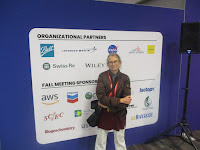 "For over a hundred and fifty years, our tribe has valued education above all," he replied, "as a way to get out of our rut of defenselessness and poverty."  Ah.  Like how Palestinians also value education -- and why their universities are constantly under attack, sometimes literally.  And, as another presenter mentioned, why America has now become a diseased combination of First and Third worlds.

"Americans are either wealthy conspicuous consumers who think nothing of dropping half-a-million dollars in order to fly out into space with Elon Musk, Jeff Besos or Richard Branson -- or else they are just America's existential field hands."

Up next at the convention?  After lunch, Michael Bloomberg is gonna try to explain to us how and why he suddenly became a Democrat and Man of the People.  Good luck with that one, Mike.

PS:  Getting a press pass to the AGU convention was extremely hard.  The press liaison kept asking me, "But do you work for a major publication?"  Who me?  Definitely not.  If you are a reporter for the New York Times, say, then you gotta toe the corporate line, right?  Sorry, guys, but the Times doesn't want me -- and I don't want it either.  However.  Will still work for chocolate chip cookies!  https://sana.sy/en/?p=180156

Stop Wall Street and War Street from destroying our world.   And while you're at it, please buy my books.  https://www.amazon.com/Jane-Stillwater/e/B00IW6O1RM
Posted by Jane Stillwater at 6:34 PM