Michael Bloomberg at the AGU: Was gonna write a hit piece on him but...

Front and center at a recent Michael Bloomberg event in San Francisco?  Seated within mere feet from an actual billionaire?  Hey, that's me!  Somehow I managed to score the absolutely best seat in a room that held 3,000 people.  Is karma my bitch or what!  Maybe I should play the lottery too, I'm feeling that lucky.  We were all waiting to hear Jerry Brown and Michael Bloomberg talk about the current climate crisis.

Then a science guy from the Midwest in the seat next to me started man-splaining about how climate-crisis-denying politicians in the pay of huge corporations are constantly battling to prevent any sort of effort to stave off extinction of the human race.  "At first they denied it was even happening at all but now they just tell us that solar power will give us cancer."  Uh, no.  It won't.  "All you need is to use one-tenth of one percent of Michigan's farmland to solar-power the entire state."  Our fossil-fuel warlords don't want us to know that.  https://www.forbes.com/sites/walvanlierop/2019/12/06/yes-fossil-fuel-subsidies-are-real-destructive-and-protected-by-lobbying/#724279be417e

Then Brown and Bloomberg walked onstage.  Damn it, I forgot my camera.  They were only 12 feet away.  But there's still the old-school option of pen and ink, right?  So I'm sitting here in the front row, totally ready to write a hit-piece on Bloomberg, the billionaire who has suddenly switched from being a neo-con Repub to being a climate-protecting Man of the People.  Humph.

"No one in the Midwest has even heard of Michael Bloomberg," said the man seated to my right.  And does Bloomberg have a facelift?  I wish I look that good at his age.

But then Bloomberg speaks.  Oh, crap.  He's really actually into this climate crisis stuff, has been since the 1990s, puts his money where his mouth is.  There goes my dream of an actual hit piece.

"This is the most important time to be working in science," he tells the 3,000 science nerds who are avidly listening.  "And we desperately need politicians who are not purveyors of 'alternative facts' at this crucial time."

Yeah, we do need them.  Desperately.  Sometimes we Americans get so thoroughly involved in our own current soap operas that we forget the very real dangers of the Big Picture when we pull the levers of our (highly tampered with) voting machines.
https://www.youtube.com/watch?v=FIBEcIFyFSk&feature=youtu.be&t=2505

"Ending the climate crisis is not a scientific problem.  We can do this.  It is a political problem."  Oh.  That's probably why he is running for prez -- not for fame and glory?  Hmmm.  "Climate-change deniers have gone from saying 'It doesn't exist' to 'It's a commie plot' to 'It may exist -- but it wasn't caused by me!'  Climate capture is our only viable solution.  And we need educated people to save the world."

Tell that to the current administration.  America is currently # 22 in science education.  There are currently twenty-one other countries who are both smarter than us and have more science nerds in the pipeline.  That's just scary.

"But this is a world-wide problem and it needs a world-wide solution.  We need China and India onboard with this too."  This is no time to go picking a trade-war with China.  "We need China to join us in this fight.  The trade war isn't helping here."

Altogether Bloomberg gave a very impressive speech.  However, like the guy next to me just commented, "If he really wanted to get his message across, he should just spend all this money on simply buying Fox News." 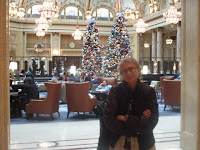 But still and all, I was impressed with the new "Mike" Bloomberg.  Why?  Because the climate crisis is really a big deal for me.  I gots grandchildren.  I would like to see them survive the next twenty years.  And Bloomberg is still far better than what we are stuck with in Washington now.

PS:  Neither Bloomberg nor Brown mentioned the greatest polluter of all -- war-mongering.   Imperialism.  "Humanitarian intervention".  Afghanistan.  Libya.  Iraq.  Yemen.  Korea.  Palestine.  Bolivia.  Chile.  Bosnia.  Vietnam.  Honduras.  Guatemala.  Ukraine.  Syria.  Bombs that go bump in the night -- and calculated slaughter of women and children by the millions.  Imperial "wars" that are murdering our climate too.  And us as well.  https://www.almasdarnews.com/article/new-attack-on-syrian-oil-fields-was-too-sophisticated-for-terrorist-groups-source/

Let's face it, guys.  We Americans aren't never gonna give up our cars.  We're like those lung-cancer patients who smoke til it kills us.  But....  I think that Americans may finally be willing to give up on "war".

Bloody imperialism since 9-11 has been a really bad seven-trillion-dollar consumer decision.  We coulda bought solar-powered cars instead.  And perhaps in the future we Americans may finally wake up and chose American values and Jesus' teachings (and sustainable energy) here at home -- instead of the wholesale murder of babies abroad.

Hey, it could happen.

Stop Wall Street and War Street from destroying our world.   And while you're at it, please buy my books.  https://www.amazon.com/Jane-Stillwater/e/B00IW6O1RM
Posted by Jane Stillwater at 1:37 PM