There's no future in it: Why hatred is a big waste of time

I used to love to travel the world.  The whole world was my oyster.  I used to be a fabulous war correspondent who happily went off to dangerous military hot-spots like Afghanistan, Honduras, North Korea, Syria and Iraq.  And then my 401K money ran out and that was that.  It takes a lot of $$$$ to be an overseas war correspondent (unless of course one is willing to lie and in that case you can get hired on the spot by the New York Times).

So then I started justifying why I could only afford to travel around the USA by telling myself that I was heroically exploring the "Belly of the Beast" itself, the American colonialist beast that had actually brought us all these terrible "wars" in the first place -- everything from that terrible massacre in the Philippines in 1901 up to and including those murderous flowers of death in Yemen, Syria, Afghanistan, Juarez, Honduras, Palestine and Libya right now.

But I soon ran out of the money to be able to do even that and couldn't even afford to travel to Vegas -- let alone Boston or Honolulu.  I really wanted to go to Brownsville for instance, to try to help the heart-broken, sick and possibly-dying babies who have been kidnapped by ICE along the Texas border -- but even that seems just one bank account too far.  Plus I never seem to win the lottery either.

And then a friend of mine told me about some ancient Native American ceremonies that frequently take place right around here, almost in my own back yard -- and so I began to travel inward instead, with the help of a lot of drum-beating and lack of sleep to all hours.  It was cheaper, closer to home and didn't pollute the air.

So.  What did I learn on my recent inward journeys?  That if someone's heart and soul is filled up with past hatreds, then there is no more room for any future wonderfulness. 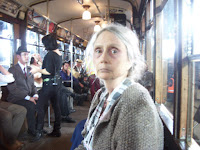 By dwelling on racism and bias and sectarianism and political schisms and religious feuds and climate-change denial and sexism and "war" and all that other burdensome junk, then Americans have given away, thrown away, ditched, dumped and voluntarily sacrificed their own precious ability to focus on what comes ahead -- and to make it better than what came before.  More sparkle-ly, more productive, more user-friendly, more fun!

PS:  I have just enough frequent-flyer miles left right now to get me to St. Petersburg, Florida, for the annual BoucherCon book conference there, starting on September 5.  And I can also stay in a friend's teardrop trailer -- while gleefully contemplating all those free books being given away at the conference.  https://www.bouchercon2018.com/

And I also will be crossing the Gandy Avenue causeway to Tampa in order to ask for an interview with Leonard Peltier's legal team.  Yes, Leonard is still being locked up in jail for crimes that he didn't commit -- been locked up for over 40 years now.  But that's American injustice for ya.  Nixon may be dead but CONINTELPRO is still alive and well and rejoicing that Leonard is still trapped in a bleak high-security prison just outside of Tampa.  https://www.whoisleonardpeltier.info/

And I just checked out Peter Mattiessen's book on Leonard from the Berkeley Public Library -- you know, the book that the FBI spent eight long years in court trying to suppress its publication.  Should be a very interesting read.  https://www.amazon.com/Spirit-Crazy-Horse-American-Movement/dp/0140144560

Reporting from Tampa and St. Petersburg might not be as glamorous as reporting from Yemen or Syria or Gaza but the protagonists are the same in both places -- American colonialists and their sleazy blood-thirsty friends.  Yuck!

Posted by Jane Stillwater at 2:16 PM