Photos of ancient and damaged churches in Aleppo
These photos that a friend in Aleppo just sent me are amazing!   Everything seems so freaking OLD in Aleppo -- but in a good way.  We have NOTHING like this in America.  Makes me want to win the lottery and get on the first flight to Aleppo.  I love old stuff.  When I was a kid, I always dreamed of going to Egypt and living in a pyramid.  Obviously that didn't happen.
Please pray for the brave Syrian army.  Over 60,000 of its soldiers have been slaughtered and murdered while trying to defend Syria from ISIS and the United States.
____________________________________________________ 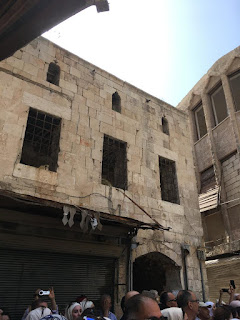 1.  At the centre of the photo, there is the star of David formed out of the window’s steel bars.  The symbol was seen in so many historical areas.  It was a normal sign used by all faiths in decorations and religious shield (mostly by Christians in this case) centuries before the creation of the state of Israel.  The building is on the Little Cross square.

2.  Epitaphs inside the Armenian Forty Martyrs Church (AFMC).  Some of them, like this one, are written in three languages: Armenian, Arabic, and either English or French.
3.  Damage at the top floor of the AFMC.  Its main door was damaged and the opening was filled with temporary blocks and cement, as shown in the previous examples.  The façade is dated back to 1840s, with a renovation dated 1992. 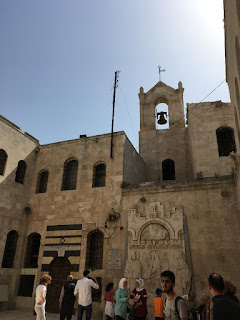 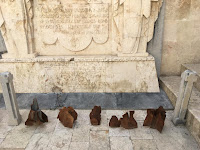 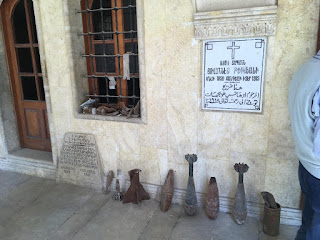 6 and 7.  Samples of the mortars that were shelled upon the heads and roofs of the people and their houses and churches, are shown in the AFMC yard.


8 and 9.  Some decorated architectural features from the 19th century in the AFMC. 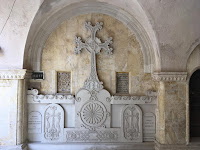 10.  In memory of Armenian genocide 1915.  Another genocide took place a century later against them and the rest of Syrians from the grandsons of the Ottomans, in Aleppo and everywhere else on the Turkish-Syrian borders. 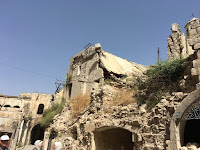 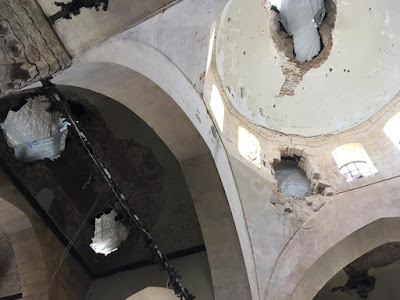 11.  Destruction to the AFMC gate and entrance seen from the Little Cross square.
12.   The GOC’s domes and roofs are of the most damaged ones among the churches. 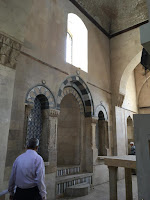 13.  The alter and eastern niche in the GOC looks in good condition.

14.  One of the copies of the original work that dates back to 1750.  I didn’t have the chance to know if the original one was looted or just hidden in a safe place.


Then my friend sent me these ones too.  The titles and descriptions are also his:

From the ancient Christian sector of the city -- or to part of it, to whatever left of it.  It’s called al-Jadeedah, or le-Jdaïdé (the New) for female, meaning the new part of the walled city of Aleppo, New neighbourhood, new sector, new Aleppo.... it was new when it had been built after the Mongol conqueror Timur (Tamerlane) sacked Aleppo in 1400AD.

People started coming back to the ruins of Aleppo little by little, and the Christians started building that sector to the north of the walled city, outside of it. Most of its buildings now belong to the ottoman era (16th-20th centuries), having beautiful traditional courthouses, schools, and churches.

Christian Arabs and Armenians lived in it for centuries before it was destroyed recently in the war, mainly by the armed gangs supported by Turkey.  It seems that their hatred to the Armenians is timeless!  The ancient sector housed around 11-15 different Christian sects with their churches.  Some of them are pretty small (like a group of 4 churches, mostly Armenians, sharing one court, smaller than one courthouse in a big traditional house).

"The Maronite Cathedral 1873-1923 (50 years building it). In front of it is a statue of a seated Maronite bishop called Gabriel Germanos Farhāt (1670-1732), whom the square is called after him (Farhat Square). The left tower had a clock that chant every 15 min. part of the Ave Maria tone. It had been restored recently by an Armenian clock technician, who was among the crowd today, and received a great salutes and greetings from everyone.

Signs of the damage on its façade.

Quote from the Bible: Wisdom of Yeshua son of Sirach: 48: 4:  (Elijah!  Your miracles were marvelous!  No one else can boast of such deeds!).


Statue of Saint Elijah in side the Maronite Church - 1929

The second gate of the Maronite Cathedral (1873). It used to be called by then as the church of the Alive Saint Ilïās (Elijah).


Restoration inside the Maronite Cathedral. Interesting that the engineer who is working over there is a Muslim.  The crisis united people from different faiths against the terrorists. It divided them somewhere else though.  You can see the sky over here because the roof was destroyed and collapsed completely.

Decorated water well in side the Maronite church. Interesting note said that the designer was European, he put his design on a transparent sheet. But the local professional sculptor knows no Latin a century ago, so by mistake, he mirrored the Initial letters of the Holy Name of Jesus (IHS) (Iesus Hominum Salvator) ! They left it as it is.

The entrance of the MGCC, dated 1852, as a restoration after it had been burned in an uprising in the mid 19th century.  The decoration above the door considered by some as the Syrian/Alepian rococo style.


Restoration of the roof and dome of the MGCC.  The altar is decorated with the same rococo style is hidden behind the scaffolding.

Through the cobbled paths, arches and vaults intervene the way.  Parts of those houses are built above them. Damage at the roofs and upper edges are clear in some photos.  Those upper rooms on the vaults break the boredom and the long paths, and gave several spots with shades and shadows among the sunny ways.

Properties (houses, shops, churches , and restaurants) had been looted in the war, many original doors had been damaged or broken. Temporarily owners had closed the opening of the doors with stones and cement till they fix and prepare the original doors.

This little square is formed out of two intersected paths in X-like square, called the Little Cross, dates back to early ottoman era (16th century). The amount of destruction is huge around here, where the Armenian churches and houses are. People were having tears in their eyes, while others were cursing the terrorists and whom ever supported them (mainly the Gulf states, Turkey, and the US).

One of the big traditional courthouses, from the mid 18th century, that had been turned into a school in the last decades, and it’s housing some refugees today.

Different details for each and every opening.

The Īwān, which is the biggest vaulted niche located in each traditional courtyard house on the southern direction.  Some old inscriptions inside it mentioned the Virgin Mary’s name, as a proof that the owners were Christians.

More decorations that takes the Star of David style, although the house originally was for Christian family.  That was centuries before the creation of the state of Israel.

Internal motifs on the wooden cornice that have paints of fruit dishes
... and poetry just below the ceiling.

Another house which was housing Institute Saint Basile, for one of the Catholic sects.

Fig tree in the courtyard!

Damages at the roofs of Basile institute.

I have to mention that half or more of the Jdeïdé area was closed for people.  It had been heavily damaged and destroyed after been looted by the terrorists.  The civilian resistance is to stay and rebuild it again as it was and even better.  Arab Christians and Armenians staying in the region are the best resistance to all the the foreigners’ agendas to cleanse the Levant from minorities and Christians.

I know that many had already left to Europe and other countries, but many of them are still living here and asking their families to come back and help in rebuilding their properties.  It’s a long difficult struggle, but not an impossible one. 🤞🏻

Posted by Jane Stillwater at 1:01 PM