1948: How Jews brought the Nazis with them to Palestine

Last week I attended an Al Awda conference in Long Beach and (mostly) had a wonderful time.  Rode down there on the MegaBus, stopped in Burbank to visit Central Casting, was taken to dinner by friends and toured the historic Queen Mary -- but then, once at the conference itself, we all got down to the sad business of listening to 70 years' worth of Palestinian horror stories.

Right off the bat, we were shown a documentary film entitled "1948: Creation & Catastrophe".  It was scary.  I'm still in shock.  At the beginning of this film, we watched many happy images of European Jews arriving in Palestine -- but these joyful scenes were soon followed by many brutal and horrific images of these same European Jews doing the exact same thing to Palestinians that the Nazis had done unto them.  https://www.youtube.com/watch?v=uuLPhGBPq38

"Throw your son into the oven," one Jewish soldier screamed at a Palestinian father, a baker.

"I cannot," said the father.  And so the Jewish soldiers threw the son into the flames themselves -- and then threw the father in after him for good measure.

Over 500 Palestinian villages were gutted and destroyed -- even worse in scope than the destruction of the Warsaw Ghetto. 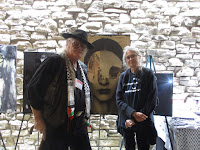 What else can I say?  The documentary showed us the faces of thousands of Palestinian refugees being driven from their homes (that is, the Palestinians that were not slaughtered).  "Down all the roads they came..." carrying their babies and owning only the clothes on their backs.  And these roadsides were littered with the corpses of dead babies.

So much for erasing the tainted memories of the Holocaust inflicted on European Jews by the Nazis.  Now these very same Jews were deliberately creating a Palestinian Holocaust.  Watching this film, I suddenly realized that the Nazis too had come to Palestine.  The Jews hadn't escaped the Nazis after all.  The Nazis too had come to Palestine -- hidden in the souls of the surviving European Jews.

And now, 70 long miserable years later, there seems to be hardly any Jews left in Israel today.  "But how can that be," you might ask.  Because most Israelis appear to have turned into the same fascist types like their leaders Netanyahu and Lieberman -- who will do anything for power and money.  So much for Moses and the Torah.

PS:  Israeli neo-colonialists today are clearly biting off far more than they can chew -- attacks on Syria, attacks on Lebanon, attacks on Gaza, attacks on Jenin, Nablus, Hebron, Ni'lin and Bethlehem.  Nuclear weaponry, torture centers, gigantic jails, night raids.  Imagine if Israelis had used all that $$$ for good.  Imagine if they finally stopped behaving like Nazis.  https://www.truthdig.com/articles/killing-gaza/

Stop Wall Street and War Street from destroying our world.   And while you're at it, please buy my books.  https://www.amazon.com/Jane-Stillwater/e/B00IW6O1RM
Posted by Jane Stillwater at 3:02 PM