See something, say something: "Those idiots in Washington are gonna get us all killed!"

"Hello, Homeland Security?  This is Jane Stillwater.  I'm in Washington DC right now and just overheard someone plotting to blow up the whole freaking world.  If you don't stop them right now, America could be end up as a NUCLEAR WASTELAND!" I screamed into the phone.  https://www.strategic-culture.org/news/2018/02/18/us-is-executing-global-war-plan.html

"Calm down, lady.  Just tell us what you heard."

"Some dude who identified himself with the obvious code name of 'Lt. General Richard Clark' was talking about plans for a false-flag operation that involved blowing up parts of Syria, Lebanon, Iran and Gaza -- murdering children, targeting civilians!  It was horrible!  You MUST do something to stop him!"  https://www.mintpressnews.com/israel-us-operation-juniper-cobra-a-harbinger-of-war-on-syria-hezbollah/238768/

"Ma'am, we have no control over what happens outside of America.  Plus you could be just imagining all this."  Calling me crazy, is he?  Well, I'll show him! 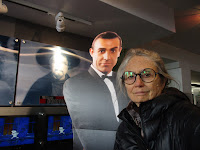 "The dude actually said with his mouth that the intention of all these attacks was to vilify Russia and China, enough to get them all pissed off and into a shooting war.  But it's not NICE to piss off Mother Russia!  Then some other dude talked about being in cahoots with Ukraine neo-Nazi bad guys with a plan in place to blow up Russian-speaking Donbas!  You've got to stop these people before Russia finally loses patience with the idiots in Washington and drops nuclear bombs on us in return!  Please!"  https://www.globalresearch.ca/russia-warns-us-against-attacking-syrian-forces/5631930

I also tried to tell DHS how I overheard the king of Saudi Arabia plotting to send whole planeloads of gold bullion to buy off Congress (again) so that the Saudis could continue to massacre Yemeni babies at will -- without any tiresome meddling by stupid American busybodies still tied down with the lead weight of conscience.  And also how the evil Saudi neo-colonialists were in league with the evil Israeli neo-colonialists in their plot to steal everything in the Middle East that wasn't tied down and then become a super-power themselves -- with America in the role of the red-headed stepchild.  http://therealnews.com/t2/story:21264:Gideon-Levy:-The-Zionist-Tango:-Step-Left,-Step-Right

But the Homeland Security guy hung up on me.

So much for "See something, say something."  Humph. 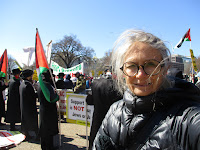 PS:  Other than the fact that Washington DC is the home of a bunch of feral idiots who risk American lives daily in their insane quest for diabolical power, the District of Columbia itself is a wonderful place.  I got to tour the Senate, the House of Representatives, the International Spy Museum, the National Portrait Gallery, the Library of Congress and the Supreme Court -- and also attended a hope-inspiring rally and march staged by Hasidic Jews in protest of Israeli corruption and war-mongering.
https://www.thestar.com/opinion/star-columnists/2018/03/13/instead-of-being-in-jail-haspel-is-cia-director.html

The National Portrait Gallery had an excellent and intimate exhibit of the writing of Sylvia Plath.  Fascinating and tragic at the same time.  And I almost got thrown out of the Gallery itself by some irate docent when I tried to cut in line to see the new portrait of Michelle Obama.  But I got my revenge.  I bought the postcard instead and took a selfie with it.

"150 people are standing in line to see Michelle's portrait right now," I said to one of the guards there.  "I wonder how many people will stand in line to see a portrait of Melania."  The guard and I both laughed.  But actually, it's not Melania's fault that Americans are more interested in Stormy Daniels than they are in her.

Hell, Americans are far more interested in Stormy Daniels than even in the fact the the power-mad idiots in Washington are trying to blow us all up.  But at least some of the DC Metro stations I rode through are far enough underground to serve as bomb shelters.  I wonder if I should start building a bomb shelter too when I get home.  Couldn't hurt, might help.

Stop Wall Street and War Street from destroying our world.   And while you're at it, please buy my books.  https://www.amazon.com/Jane-Stillwater/e/B00IW6O1RM
Posted by Jane Stillwater at 2:38 PM