Live from Reno: Gambling on Trump & friends is a really bad bet!

I'm up here in Reno Nevada right now, attending a convention of murder-mystery writers and readers -- and guess what?  I'm actually going to speak at an authors' discussion panel this Friday.  So exciting!  It's like unexpectedly winning the jackpot on a slot machine.  Not something that happens every day.  http://www.leftcoastcrime.org/2018/Panels.html#Friday

The subject of my talk will be my latest detective novel, "Road Trip to Damascus".  It's awesome.  And, knowing me, you can probably guess who the villain might be.  Spoiler alert:  It's the CIA.  https://www.amazon.com/Road-Trip-Damascus-Jane-Stillwater/dp/1548204730 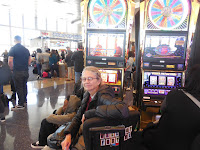 But speaking of winning and losing, America is currently being run by the biggest bunch of losers on the planet.  Boy, would I love to speak on a panel discussion about them -- hopefully on CNN but I'd even settle for Fox News.  However, nobody in my country seems to want to hear about America's Biggest Losers.  And of course I'm talking about President Donald Trump and friends.  Trump's list of BFFs reads like a murder-mystery too -- or actually more like a horror story.  Let's just take a look:

First let's consider Trump himself.  The man thrives on chaos -- but unfortunately the rest of us do not.  And then there's Vice President Pence, who appears to want to put every woman in America into cages and only allow us out to give birth and dust furniture.  Happy Women's History Month to us.  We'll soon be back in the Dark Ages if Pence gets his way.

And apparently Trump's perspective National Security Advisor John Bolton has plans to make us all so secure that our coffins will fit us just right.  Secretary of State nominee Pompeo has wet dreams of starting a nuclear war with (fill in the blank).  Secretary of Defense Mattis thinks that the best defense for America is to get us all killed so we won't have to worry about surviving World War 3 any more.  https://www.commondreams.org/news/2018/03/16/warnings-civilization-threatening-disaster-john-bolton-tops-list-mcmaster

Trump's nominee for the head of the CIA, Gina Haspel, is addicted to torture.  Hope you haven't had a mani-pedi lately because there goes your nails.  She's the kind of bad guy I wrote about in my murder-mystery -- and she could be coming to your town soon too.
https://readersupportednews.org/opinion2/277-75/49039-focus-gina-haspel-should-be-in-the-dock-at-the-hague

United Nations ambassador Haley appears to have totally dedicated her life to murdering every single Syrian still left alive -- and she knows how to lie, cheat and steal to get the job done too, is even far better at it than Colin Powell was regarding WMDs in Iraq.  Will she be coming after us next as well?  Lie down with dogs, get up with fleas.  http://www.newsweek.com/now-mattis-admits-there-was-no-evidence-assad-using-poison-gas-his-people-801542

But Trump's most scary Besties of all are Israel and Saudi Arabia.  Everyone knows that the Saudis cut off people's heads and fund ISIS -- and yet Trump asks them to the freaking White House for dinner and friends them on FaceBook and Twitter.

And the stuff of nightmares that Israeli neo-cons have happily perpetrated in Gaza makes my blood curl.  And yet the monsters responsible for creating the worst concentration camp since Auschwitz are all Trump's BFFs.  Why is it that liberals hate, hate, hate Trump but love, love, love his BFF Israel?  Can't they see the connection?  I'll never be able to figure that one out.  Still a mystery to me.  https://www.ucpress.edu/book.php?isbn=9780520295711

But right now I just want to forget about all the horror that lies ahead of us -- like the rest of America surely has.  Right now all I want to do is go lose a few dollars on the penny slots and then take a nap.  Wake me up when America finally comes to its senses (or else in time for dinner, whichever comes first).  But clearly I have far more chance of winning big bucks on the penny slots here in Reno than America has of winning ANYTHING while being led into total chaos by Washington's biggest losers.


PS:  Although Trump always touts himself as the owner of Casino America, in reality he's not even a pit boss -- more like a wannabe blackjack dealer on the graveyard shift.

Then who exactly are America's true casino owners and high rollers?  The Deep State?  The military-industrial complex that eats its young?  The neo-con Israel lobby?  The wolves of Wall Street?  The dark money behind Citizens United?  We may never know.  The only thing that we do know for certain is that it ain't you or me -- and it's definitely not Donald Trump.

So.  When are Americans going to finally stop wasting their money by playing at Casino America -- where all the decks are stacked against us?

Stop Wall Street and War Street from destroying our world.   And while you're at it, please buy my books.  https://www.amazon.com/Jane-Stillwater/e/B00IW6O1RM
Posted by Jane Stillwater at 10:39 AM