Madam Jane predicts -- disaster ahead!
"Let's face it," Madam Jane said to me as we strolled through thousands of white grave markers in the Golden Gate National Cemetery the other day.  "America just can't continue spending over 60% of its income on murdering people abroad.  It just can't.  No country can afford that kind of luxury item for long."
Hmm.  She might have a point. 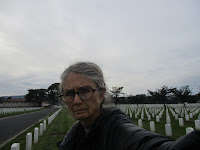 "Just look at all these rows and rows and rows of dead people," she said.  "Lives wasted on trumped-up 'wars', sure, but mostly money wasted too.  It's like buying a new Cadillac in order to throw it in a trash compactor while your young children starve.  It's immoral.  It pisses me off."
That could be true too.  You don't just run out and buy a Caddie when there's no food on the table and the rent's coming due.
"And now America is trying to pick a fight with Russia, North Korea, Iran and probably China, while also carrying on 'wars' and proxy 'wars' in Syria, Yemen, Afghanistan, Africa and Central and South America as well.  This is all going to end badly, mark my words.  You'd better start stocking up on toilet paper and soap."
Actually I worry more about running out of food and not staying warm -- but then that's just me.
"Just look at Israel," M.J. continued.  "it is a microcosm of the USA, sort of a mini-me.  it also spends most of its money on weapons too -- and 70 years later, it's still at 'war' with Palestinians who can only throw stones to fight back.  In the last month alone, nuclear-armed Israel has jailed over 400 children for throwing stones and having knives."
I also know that 700,000 Palestinians have spent time in Israeli jails.   Don't Israelis have better things to spend their money on?  Apparently not.
"And look at Saudi Arabia, yet another American mini-me.  It spends most of its money on supporting ISIS and al Qaeda and bombing defenseless Yemen, right?"
I suppose so.
"And 70 years from now, the Yemenis will still be fighting back to the last man -- and with stones too, if that's all they've got.  But by then the fabled Saudi oil wealth will have all run out.  The Saudis are just not planning ahead either.  Obviously they can't see into the future like I can."
Apparently not.
"And the same holds true for the American macrocosm.  We also have spent the last 70 years on murdering people in foreign lands instead of taking care of people at home.  And our time is almost up too."
"Sounds like you're talking about moral proximity, " I replied.  "I just read something about that -- where it's your moral duty to take care of those around you first.  We Americans are not doing that. "
"Damn straight," said Madam Jane.  And then she sighed.  "I truly wish that I could stave off the disaster that's coming our way.  But I can't."
PS:  Speaking of disasters and/or keeping warm, I am leaving for Charleston, South Carolina in a few days.  Why?  Because, silly me, last summer I thought Charleston would be a nice place to go and be warm during the winter of 2018.  And then the "Bomb Cyclone" hit.  Yikes!  It was 25 degrees in Charleston this morning.
I don't need Madam Jane to tell me that my future ahead looks cold.

Stop Wall Street and War Street from destroying our world.   And while you're at it, please buy my books.  https://www.amazon.com/Jane-Stillwater/e/B00IW6O1RM
Posted by Jane Stillwater at 12:59 PM