One huge fatal flaw in the human psyche is that all too many of us seem to be incapable of grasping the Big Picture.  In Charleston, South Carolina, however, the Big Picture is currently being shoved down our throats -- like it or not.  "We had seven inches of snowfall here the other day," a long-time resident just told me.  "Unheard of!"  What caused it?  Climate deterioration.  Weather pollution. 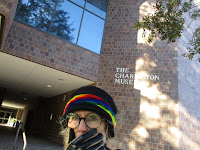 For crying out loud, how much more further proof do we need before we can actually start seeing the Big Picture here?  That Santa Claus has just moved his North Pole workshop down to sunny Carolina?  That the winter Olympics are now being held right here on Meeting Street?
Over a hundred years ago, Charleston built a gigantic seawall to keep the Atlantic Ocean out of the front yards of its charming antebellum mansions.  Well, in the next 20 years Charleston is going to have to quadruple the height of these "lowcountry" seawalls -- unless it wants to equip its visiting tourists with scuba equipment in order to view Rainbow Row.
Climate deterioration.  Weather pollution.  Big Picture.  Got it yet?  Apparently not. 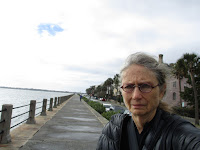 You just gotta love Charleston.  It's clearly the most beautiful and charming city in America.  And I will miss it when it is gone -- just like I will miss New York, San Francisco, Tokyo, Mumbai, Amsterdam, Shanghai, Sydney, Miami, Puerto Vallarta, Vancouver, Seattle, Boston and Buenos Aires.
Climate deterioration/weather pollution.  This is the most vital Big Picture that our limited human psyches are clearly missing right now (aside from the fact that "war" will kill our environment too).


PS:  Who profits most from denying that climate deterioration is even a thing?  Surprisingly, it is American weapons manufacturers -- the largest source of weather pollution there is.
For instance, that phony "war" on Syria alone has already subtracted years and years from the life expectancy of the entire human race.  Not to mention all the things that go "Boom" in Afghanistan, Iraq, Ukraine, Libya, Yemen, Palestine, the former Yugoslavia, etc.  Each of these senseless and barbaric attacks on vulnerable countries have been incredible bonanzas for American weapons manufacturers -- but could be extinction events for the rest of us.


Stop Wall Street and War Street from destroying our world.   And while you're at it, please buy my books.  https://www.amazon.com/Jane-Stillwater/e/B00IW6O1RM
Posted by Jane Stillwater at 4:23 PM