Getting ahead of the Ahed Tamini story....

Did a sixteen-year-old Palestinian girl named Ahed Tamimi actually dare to slap an Israeli soldier?  Yeah she did.  And not only once but a bunch of times too.  How and why?  Listen up.  Here's the true story.  You heard it here first.
Ahed and her BFF were just sitting around the house playing Candy Crush or whatever, when Ahed looked out her window and saw two Israeli soldiers enter the yard.  "Hey, you -- you with the body armor and the assault rifle and the stun gun," she said to the occupying invader.  "What the freak are you doing in my front yard!"
The occupying invader ignored Ahed.  Maybe he and his buddy had only just stepped inside the gate to take a piss? 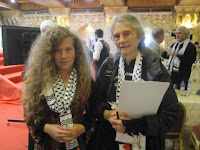 Then Ahed lightly poked at the occupying invader's arm a few times, just to get his attention because he was rudely ignoring her.  "This land is mine," she said.  "God gave this land to me..."  Or words to that effect.  And that's when the occupying invader suddenly hauled off and hit her -- and then Ahed slapped him back.  Oops.
And then the BFF and the mom and the sister and the aunt all came out, held hands and made stink-eyes at the O.I. -- and the occupying invader backed away.  End of story?  Not.  The occupying invader came back late that night with even more buddies and more stun guns and assault rifles and, well, you know the drill.  Off to jail.
That's just what happens when you object to Israeli soldiers cluttering up your front yard like some weird armed-to-the-teeth lawn gnomes.

Stop Wall Street and War Street from destroying our world.   And while you're at it, please buy my books.  https://www.amazon.com/Jane-Stillwater/e/B00IW6O1RM
Posted by Jane Stillwater at 1:09 AM