What if every car in the world stopped running today? 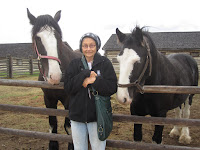 What would happen if every single car in the world suddenly stopped running?  What would you do?  You'd have to walk to the nearest farm for your produce.  Or start growing it yourself in your own back yard.  "I could probably do the farming gig okay, but what about stuff like iPhones and toilet paper?" you might ask.  "Where could we get that?"  Living without toilet paper might become our next greatest fear -- but at least we'd have clean air.

What would happen if the Federal Reserve was suddenly eliminated?  All those dollar bills that say "Federal Reserve" on them in big block letters would suddenly become obsolete.  But at least we wouldn't have trillions of dollars in digital pretend-money zooming around cyberspace and then crash-landing into the world's largest banks instead of into our own pockets where they belong.

Immigrants are now and always have been the fresh lifeblood of America's work force.  The Prez should be banning the Federal Reserve instead of immigrants.

What if no one could procreate any more, starting with the very next time that anyone had sex?  Yikes!  No more babies?  That would be hard.  The innocence and joy of a baby is the best gift in the world.  But at least the children we still have now would be cherished, there wouldn't be so many throw-away children any more and we would think twice before dropping bombs on babies in the Middle East and starving all those little kids in Africa.  Perhaps we would actually start treasuring the children we have now -- more carefully than gold.  https://www.thenation.com/article/whats-killing-americas-black-infants/

What if there suddenly wasn't any government any more?  Apparently President Trump is picking his new cabinet based almost solely on the criteria that each Secretary he picks positively hates the agency or department that he or she is now in control of?  No more schools, post offices, affordable housing, paper money, infrastructure, workers' rights, national parks, justice, healthcare, whatever.  Good luck with that one.  http://youtube-dwl.tk/video/18-reasons-why-not-to-impeach-trump/WYZ0wAaUGRA

What if, suddenly, there are no more worries about climate change -- because it has already arrived and human beings are already dying by the millions?  I have a friend in Alaska.  She said, "Winter in Alaska isn't any fun any more.  All the snow is melted and we only have slush."  Really?  All of it has melted?  In Alaska, formerly known as America's icebox?  "Well, there isn't a whole lot of it left."  And it's clearly going to go downhill from there.  http://www.globalresearch.ca/as-climate-disruption-advances-un-warns-the-future-is-happening-now/5523661

And what if, suddenly, there isn't any more [so-called] war?  No more nuclear weapons, drones, tanks, sarin gas, napalm, ICBMs, F-16s, assault rifles, DU blasters or cluster bombs for us to spend our money on.  "Jane, now you are just being silly.  The weapons industry is the only industry we've got left these days.  Think of all those people without jobs!"

"Hey, maybe they could grow vegetables?  Work in a toilet-paper factory?"  That would be nice.

PS:  Here are some URL links with regard to why we need to stop all of America's "wars" and also stop all that shrill propaganda we constantly get bombarded with, trying to drive us into so-called wars like we were just so many cattle that could be prodded into their pens and slaughterhouses.  For instance, who knew that an ISIS propaganda film, "The White Helmets," would win an Oscar?  https://consortiumnews.com/2017/02/24/syrian-war-propaganda-at-the-oscars/

Posted by Jane Stillwater at 11:20 AM