Gorsuch: Choosing between God & Trump is gonna be hard 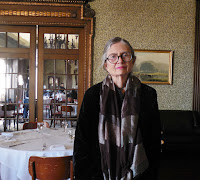 The Berkeley-Albany Bar Association has done it again!  At its latest monthly lunchtime meeting, BABA served us up the perfect guest speaker -- and the perfect rubber chicken as well.  What more can you possibly ask for.  Our speaker clearly laid it out to us, just exactly what President Trump's new Supreme Court nominee is up to.  "Neil Gorsuch is a positivist," the guest speaker said.

"But what the freak is a positivist?" you might ask.  Our speaker was about to tell us -- and in more detail than we ever would want to know if we in any way plan to look forward to the next decade with hope.  T.M.I.

"Positivism is an outdated English legal philosophy, tracing its roots back to John Austin, who thought that law was just a command of the sovereign.  There was no connection between law and morality, as Austin would have it; law should be value-free.  The sovereign ordered something and the courts enforced it."  Period.  "Positivism imagines that the law represents an order that must be carried out."  https://media2.mofo.com/documents/170203-gorsuch-positivist.pdf

And then our speaker went on to tell us more about Gorsuch specifically.  Apparently, not much compassion or morality or consideration of expert opinions or even the law itself is involved in Gorsuch's thought processes.  It's more like if whoever Gorsuch considers to be the top dog tells him to jump, Gorsuch will just say, "How high?"  And currently, that top dog appears to be The Donald.

But apparently there is one exception to Gorsuch's blind allegiance to Trump.  According to the speaker at BABA, "There is, in Judge Gorsuch’s reported decisions, a tendency to blur the constitutional lines between church and state."  So.  What if God tells him to do something and Trump says not to do it.  Who will Gorsuch choose to be his OG?  God or Trump?

And, also, what would happen if God contacts Grosuch on His hotline from heaven -- and Gorsuch gets a bad connection or misinterprets the call?  What if God sez, "I am pro-life," and Gorsuch doesn't even realize that what God is saying has nothing to do with abortions.  God is simply stating that He is for the rights of women, freedom for all, a fair living wage for the meek and that He is also anti-war -- but Gorsuch has simply gotten confused.  http://www.salon.com/2017/ 03/01/the-supreme-court-just- delivered-a-major-victory-for- gerrymandering-opponents/

Or suppose God thinks that most American "wars" are crimes against humanity, that giving welfare to corporations (but not to the poor) is an Abomination and that the Clintons, the Bushes, Obama and Trump are all going to Hell for killing millions in the Middle East.  Will Gorsuch then dutifully show up at the Pearly Gates and plead President Trump's case regarding why the Prez shouldn't be joining that huge bunch of panderers to Wall Street and War Street who are already in Hell?  http://sayed7asan.blogspot.fr/2017/02/hassan-nasrallah-chaos-in-middle-east.html

But no matter what the real story actually is, apparently Gorsuch truly believes that his hotline to God is well-connected.  But what if Gorsuch is actually right and not just some crank hearing voices in his tinfoil hat?  In that case, anyone who actually knows what God is thinking is gonna be a really handy person to have on the Supreme Court, right?  Until, of course, the day arrives when Gorsuch has to chose between God and Trump.

Or, even worse, what if Gorsuch chooses God over Trump and then discovers that Nietzsche was right?

Stop Wall Street and War Street from destroying our world.   And while you're at it, please buy my books!  http://straitwellbooks.blogspot.com/2016/04/our-top-best-seller-right-now-is-bring.html
Posted by Jane Stillwater at 11:25 AM