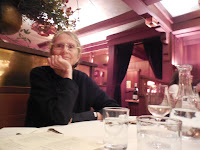 I'm so tired of playing the role of a political Cassandra -- someone who sees all too clearly what is going to happen next in the political arena, warns folks about it and then gets called a conspiracy theorist, a spoiler, a kook or a member of some paranoid radical fringe.  But unfortunately that's not the way that politics (and life) work.  Calling me names still doesn't change what is about to happen.  Unfortunately.  http://candobetter.net/comment/183005#comment-183005

I was right about the civil rights movement, Vietnam, Iraq, etc. and constantly warned people that Bush 2 was gonna be a disaster.  Let's hope that I'm not right about Clinton 2 as well -- and that she won't be a disaster like Bush 2.  And while we're at it, let's also hope that I'm not right about her wanting so desperately to escalate a war on Russia.  But don't hold your breath.  http://www.tomdispatch.com/post/176203/tomgram%3A_nomi_prins%2C_too_big_to_fail%2C_hillary-style/#more

It now seems all too clear to me what Obama and Clinton are up to -- with regard to their foreign policy.  They have practically telegraphed to us what they hope their end-game will be, and then journalist Diana Johnstone finally added the last missing pieces, laying out Obama's and Clinton's grand plan, which apparently is to recreate the exact same chaos in the Middle East that Osama bin Ladin and the CIA created in Afghanistan -- so that Russia will once again go bankrupt and fall into confusion like the old USSR did back in 1987.  http://www.investigaction.net/en/diana-johnstone-clinton-is-truly-dangerous/

Apparently Obama and Clinton really want their legacy to be this one -- to be seen by history as another Ronald Reagan, shouting "Tear down this wall!"  Wistful thinking, you two.  But it's wistful thinking like this that will get us involved in World War 3 -- as well as destroy the lives of over a billion people, including ourselves.  A "legacy" is a dangerous thing.

I violently object to the slaughter that is now going on in Syria with the intention of drawing Russia deeper into spending a fortune on fighter jets and soldiers and guns.  But at what price?  America is also spending trillions in credit-card debt at the "war" shopping mall too (as well as a billion or so on false propaganda) and we also are going slowly bankrupt -- but, whatever, that's what a legacy costs.

And I am also sickened by the slaughter that is now going on in Yemen.  "But those upstart Yemeni asked for it," you might say.  I think not.  However, just to clarify the situation for sure, I talked with a Yemeni friend of mine about what is really going on over there right now.

"99% of Yemeni civilians are not Houthis -- yet the Saudis keep endlessly bombing Yemeni civilians day after day and endless night after night, using American-supplied weapons.  However, 95% of Yemeni civilians do support the Houthis because the Houthis are the only group that protects us and helps us, digs our injured women and children out of the rubble and buries the dead.  It's a nightmare over there, really grim.  My friends over there tell me this on FaceBook."  http://dissidentvoice.org/2016/09/making-a-killing-in-yemen/

According to my Yemeni friend, "There are no splits between Sunnis and Shia in Yemen, not even between Muslims and Jews.  We all get along.  So why do the Saudis and Americans want to kill us so badly?"  Aside from Yemeni oil?  Please see above.

Is creating an Obama-Clinton legacy worth all these thousands of dead women and babies in Yemen (and Syria and Libya and Palestine and Iraq)?  Apparently, to them it is.  But it's hecka not worth it to the rest of us.

PS:  According to Robert Parry, a journalist we can actually trust, "The harsh truth is that pursuit of power often trumps the principle of an informed electorate choosing the nation’s leaders...."  There are too many trillions of Wall Street and War Street dollars at stake here for Clinton for her to risk losing this election -- to Trump, Sanders, Dr. Stein or whoever.  Whatever it takes.  https://consortiumnews.com/2016/10/27/the-modern-history-of-rigged-us-elections/

Posted by Jane Stillwater at 4:29 PM