Winter is the perfect time to turn up the heater, hide under the covers and read a good book.  Lady Gaga is right.  "Baby, it's cold outside."

I am currently reading a whole bunch of murder mysteries in preparation for attending the annual "Left Coast Crime" readers' and writers' convention in Phoenix Arizona this month http://www.leftcoastcrime2016.com/.  I'm also reading "Sapiens" by Yuval Noah Harari; "Land Without Evil" by Richard Gott; "Overthrow:  America's Century of Regime Change from Hawaii to Iraq" by Stephen Kinzer and a series of articles about the "youth bulge," a phenomenon that happens when there are more young men in any particular society than there are jobs  http://dissidentvoice.org/2016/01/barnetts-five-flows-of-globalisation/.

According to Harari, Homo sapiens began to take over the world by using three major tools:  Genocide, gossip and myth.  Genocide got rid of most of those pesky Neanderthals.  Gossip allowed sapiens to find out who was trustworthy and who was not.  And myths, such as ones about totems, hierarchies and enemies, held a lot of people together in a common cause who would otherwise just be thinking for themselves.

This description of what happened 70,000 years ago sounds pretty much like what is still happening today, right?  Only today these things are called nationalism, propaganda and religion.  And apparently genocide is still in our DNA. 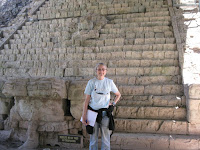 "Land Without Evil" tells the incredibly well-researched story of the tragic genocide of hundreds of thousands of South American Indians by post-Colombian Spaniards.  It is a highly detailed book and I can only read it five pages a day without getting overwhelmed, but this is definitely stuff we should know and is well worth the effort to read about it.

The series of articles written by Gearóid Ó Colmáin about the "youth bulge" phenomenon is interesting because I can now see that the current refugee crises in Europe and America are a recurrence of the same historical population-pressure events that caused the genocide of Neanderthals, American Indians, Jews, Tibetans and Palestinians.  Hitler called it "Lebenstraum".  Netanyahu called it "Greater Israel".  The Donner Party called it "Manifest Destiny".

And does it look like today's refugees to Europe and America are also trying to escape yet another Homo sapiens genocide organized around gossip and myth as well?  Read Ó Colmáin's articles and find out.  And also read Stephen Kinzer's "Overthrow," about how American neo-colonialists have been putting pressure on various "youth bulge" kids throughout the world to leave home by simply destroying their countries' democracies, ruining their economies and then shooting them if they stay put.  https://www.bostonglobe.com/opinion/2016/02/18/the-media-are-misleading-public-syria/8YB75otYirPzUCnlwaVtcK/story.html

As for murder mysteries, I like them because justice is always served in the end -- and because justice (hopefully) is also another important Homo sapiens trait.   Just ask Janet Evanovich, Alexander McCall-Smith and Sherlock Holmes.

PS:  I'm currently madly at work at editing my own book so that I will have something really good to read by next winter.  Its latest working title is "Visions of a Lost and Future World".  Or you could just go ahead and read my already-published book this winter.  It's all the hot gossip you would ever want to know about the Middle East, including what it's like to almost get blown up in Baghdad's Green Zone, get kicked off the Temple Mount by both Israelis and Palestinians, explore pyramids, visit Kabul and go on Hajj in Saudi Arabia.   http://www.amazon.com/Bring-Your-Own-Flak-Jacket-ebook/dp/B001BHK6JG

PPS:  And speaking of genocide, the American military machine is happily generating even more "youth bulges" in Syria -- even as we speak.

According to a friend of mine there, a US-backed "moderate rebel" (aka ISIS) suicide bomber just attacked the az-Zahra district in Homs city, at a time when the streets were full of students.  A second attack took place in Sayyeda Zaynab town, close to Damascus, close to a hospital.  The total loss of civilian lives in one day reached around 100 so far.  The total injured are in hundreds.

"The terrorists and whomever behind them are losing to the Syrian army, Russian air strikes and Hezbollah.  They are taking revenge by killing innocent civilians, women and kids. It's a dirty war."  http://jpstillwater.blogspot.com/2016/02/us-backed-isis-continues-its-dirty-war.html

Stop Wall Street and War Street from destroying our world.

Posted by Jane Stillwater at 1:23 PM