Diversity in Paris: It's not like what you've been told

And the same principle can be applied to the detection of lies told to us constantly by mainstream media.  Our very lives never used to depend on whether or not we could detect lies on TV.  We are not human lie detectors either.

For us human beings, the mainstream media these days seems to have become like some kind of pervert who promises to give us candy if only we step into his white van.

Take our elections for instance.  We are constantly lied to and told that corporate trolls, if elected, will serve our interests in Washington and not those of Wall Street and War Street.  And then our economy goes bust and our sons and daughters die in endless wars for greed.  And we've been lured into that white van once again.  http://www.counterpunch.org/2015/12/15/putin-gives-kerry-a-chance-to-pull-back-from-the-brink/

Another lie we are constantly being fed is that racial and cultural diversity is dangerous and we must always hate and fear "The Other".  Also not true.  Take Paris for instance.  All we hear about Paris recently is that there are gangs of terrorists loose in the City of Enlightenment -- but when I got hopelessly lost in the Metro on my way to Montmartre recently, the racial and cultural diversity in the subway was intense.  And yet we all just got along.

At the gigantic labyrinthine Chaletet transfer point, there were over a thousand people making thousands of choices between at least 20 different train platforms and approximately 50 different trains going to over 200 destinations in Paris.  I was lost, desperate and aghast!

"Just get on a damn train, any damn train," I told myself, but finally decided to ask someone instead.  But who?

A thousand people were all rushing by me -- and they all appeared to know exactly where they were going.  I was the only eye in this hurricane of humans.  And there were people from all over the freaking world rushing by me.  Caucasians, Asians, Arabs, Black people, tourists.

Yet nobody was carrying a Glock, Kalashnikov or Uzi -- or even fighting with their fists.

Nobody was even angry.

Nobody was not getting along. 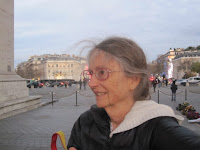 These people all had places to go and reasons for getting there -- and none of them had the time or the inclination to not get along.  Eventually I found my way to my correct Metro platform and train, and eventually I even arrived in Montmartre.  But the impression stayed with me -- that we're all being lied to.  People of all races, religions and cultures actually really can get along.

And if we don't finally start ignoring the mainstream media's barrage of lies (the main intent of which seems to be selling more and more weapons -- from Sandy Hook to Saudi Arabia -- no matter who gets killed), then we can all come to expect reports of constant violent deaths in the Paris Metro instead of just hurried commuters trying to get along.

The choice is not up to the mainstream media.  The choice is up to us.  To step into the white van or not.
Posted by Jane Stillwater at 12:38 PM