Who doesn't like a good game show?  Me!  I don't like them at all.  "Deal or No Deal" leaves me cold.  Vanna White offers no appeal.  Steve Harvey?  Forget it.  And if I really wanted to watch any kind of "Family Feud," I'd simply reenact my own childhood -- or else watch our very own American mainstream media outlets fighting to out-do each other to see who can tell us the biggest lies about Syria.  https://consortiumnews.com/2015/07/20/hidden-origins-of-syrias-civil-war/

And in a recent revival of that old 1950s TV game show "Truth or Consequences," we now also have a whole bunch of American mainstream media outlets as contestants there as well -- and while none of these MSM outlets are telling the truth, none of them seem to be suffering any consequences either.  https://www.youtube.com/watch?v=1BQFFzpGXWU

America's MSM constantly lies on air or in print these days but no one here seems to be rushing to hand them the consequence of sending them to jail or revoking their FCC licenses either -- or even forcing them to add an addendum to their reports stating that "The program you have just watched (or article you have just read) is totally fictional and has absolutely no actual basis in fact."

For instance, the New York Times recently screamed at us, "As the self-proclaimed Islamic State, or ISIS, commits horrendous videotaped executions, it might seem to pose the greatest threat to Syrian civilians.  In fact, that ignoble distinction belongs to the barrel bombs being dropped by the military of Syria’s president, Bashar al-Assad.  The Islamic State has distracted us from this deadly reality."  http://www.nytimes.com/2015/08/06/opinion/barrel-bombs-not-isis-are-the-greatest-threat-to-syrians.html?_r=0

Barrel bombs are a greater threat to Syria than ISIS?  "Wrong answer!"

And are Assad's armed forces even the ones that are dropping these bombs?  No.  "Wrong again."  The correct answer here is that ISIS is the one firing these bombs at civilians, and they are composed of old water heaters filled with kerosene and shrapnel and then fired by guns called Hell cannons.  Yuck.  http://jpstillwater.blogspot.com/2015/07/syria-where-america-drops-barrel-bombs.html

Next, "Democracy Now" becomes our contestant, trying hard to win "Truth or Consequences" for the MSM side.  We all know what a liberal Amy Goodman is, not like the folks on Fox News who are almost expected to lie -- thinking that they are playing "Truth or Dare" instead.  But surely we can trust Democracy Now for the truth?  Let us see.

"The group Physicians for Human Rights says there have been more than 300 attacks on health facilities, with the Syrian regime responsible 90 percent of the time," says Amy Goodman.

According to my on-the-ground source in Aleppo, the correct answer is obviously that ISIS has been committing these attacks.  "Since the beginning of the Syrian crisis, or let's say, since the beginning of the organized armed gangs like the FSA, An-Nusra Front, ISIS and Da'esh, they have been competing with each other to see who can demolish more hospitals and schools than the other.  Literally hundreds of hospitals had been destroyed in Syria by suicide bombers driving huge vans full with explosives into them, and they recorded their 'achievements' and published their videos on YouTube with pride."

And all this horror has been blamed on the Assad government by the American media.

"No one talked about the doctors, nurses, and patients who had been buried alive under the wreckage of these hospitals," my friend continues.  "Maybe a couple of times Ban Ki Mon was worried or condemned such acts, but that's it, nothing more than a few words from the UN, words that everyone forgets the next day, and goes back to blaming the 'Assad regime' of killing its people."

Moving on.  Enough of "Truth or Consequences".  Let's change channels.  Back to "Family Feud," where our American MSM contestants are still struggling to out-do each other by telling the biggest lies.

CNN steps up to the plate.  "Russian airstrike hits Syrian hospital, aid group says."  http://www.cnn.com/2015/10/23/middleeast/syria-hospital-attack-russia/ And then The Guardian in Britain backs up that lie.  "At least four hospitals have been bombed by fighter jets in north-western Syria since Russia's intervention in the war began in late September, doctors and international observers claim."  http://www.theguardian.com/world/2015/oct/22/three-syrian-hospitals-bombed-since-russian-airstrikes-began-doctors-say

But now it turns out that five out of the six hospitals that the MSM claimed that Russia had bombed don't even exist!  And the sixth one is still intact.  http://sputniknews.com/middleeast/20151102/1029484605/syria-russia-airstrikes-n-hospitals.html

And what about all those accusations regarding the use of sarin gas by the Syrian government?  Truth?  Or just another media "Family Feud"?

But then Seymour Hersh, a trusted journalist who has been spot-on since reporting America's many MSM lies about Vietnam back in the 1960s, has just told us that, "A series of chemical weapon attacks in March and April 2013 was investigated over the next few months by a special UN mission to Syria.  A person with close knowledge of the UN’s activity in Syria told me that there was evidence linking the Syrian opposition [aka ISIS] to the first gas attack on 19 March in Khan Al-Assal, a village near Aleppo."   Yikes.  We've been lied to again.

But of course the biggest lie of all is that the American military machine, Congress and Obama all hate ISIS.  "Boy do we really hate ISIS!" they all cry out loud.  Balderdash.  ISIS simply would not exist without American, Turkish, Israeli and Saudi help.  Period.  End of discussion.  http://jpstillwater.blogspot.com/2015/10/even-more-chicanery-in-syria-by-our.html 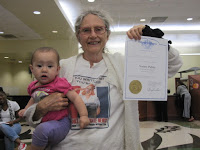 PS:  I just got my Notary Public certificate renewed, so if anyone in the American MSM wants to come to Berkeley (or pay my airfare to go to them) in order to swear a Jurat that they are telling the truth, I will take their sworn statements for free -- just so there will be a record of their perjury should they all, hopefully, go to trial.

Posted by Jane Stillwater at 12:56 PM