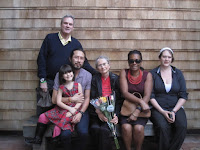 Without fail, every single year I get yet another year older.  Nothing I can do about that.  But it is a whole lot easier to face yet another birthday when there is a really big reason to look forward to it.  So every year I save up my money and go off to Chez Panisse for my birthday and then I can always look forward to that.  Except that this year I got my OpenTable reservations all screwed up and we had to eat in the cafe upstairs instead in the more glamorous downstairs seating.
The other five people I went with had absolutely perfect dinners upstairs and the more casual atmosphere up there suited my family just fine.  Plus we met Leah Meyerhoff, the director of "I Believe in Unicorns," which opened at the Roxie in San Francisco last week.  http://ibelieveinunicorns.com/trailer


But my own pasta dish tasted practically just one step above Chef Boyardee and I was heart-broken not to have the open-fire-roasted rack of lamb that the nobs downstairs got to eat.
Then, it being my birthday, I went home afterwards and reflected on my life so far.  And I was not a happy camper about what I saw.  "You seem to be pretty much wasting your life right now," I said to myself.  And, sadly, my self nodded back in agreement.

At dinner my son had observed, "There are two kinds of people -- those who happily live their lives on the surface and those who are willing to go deeper into who they are and what they can do to make their lives more meaningful and worthwhile."


Good grief, sometimes I wish that I was just happily shallow.  Then I wouldn't freaking care so much about the recent tragic deaths in Charleston and the on-going tragic deaths in the Middle East.  http://www.informationclearinghouse.info/article42288.htm

And it wouldn't even matter to me that America is being sucked into a financial Black Hole.  http://www.informationclearinghouse.info/article42280.htm

But all this does matter to me.  Greatly.

Too bad it doesn't seem to matter to anyone else.

But next year I plan to get my Chez Panisse reservations all carefully straightened out early so that I can eat roast lamb instead of Chef Boyardee.

If there is a next year, that is.

PS:  I just opened up a new online T-shirt shop at Cafe Press!  Be the first on your block to proudly own and wear a T-shirt proclaiming "Stop Wall Street & War Street from destroying our world".  Or else get a bumper sticker or baby shirt or mug that says it.  Somebody has to say this.  Might as well be us.  http://www.cafepress.com/stillwatershop

PPS:  And speaking of getting older, way back in 2004 I wrote a really funny satire on the annual Bohemian Grove bacchanal that rich people hold each July.  But re-reading my article again in 2015, I realized just how naive I had been back in 2004 -- obviously thinking that bankster skullduggery and Endless War was just some passing phase and something I could easily joke about.  http://jpstillwater.blogspot.com/2004/07/my-weird-weekend-at-bohemian-grove.html

But over a million American-made corpses later, I don't think that way any more.  Endless War and bankster skullduggery are obviously here to stay and it's really hard to be cheery in the face of that fact -- especially when one realizes that bankster skullduggery is now a done deal and that Endless War is now the world norm and could come to my home town now just as easily as it had once come to Baghdad.

Who would ever have dreamed that so many sovereign countries would go down in flames and that so many millions of people would be either dead or homeless within just one short decade more.  "Mission Accomplished," Wall Street and War Street.
Posted by Jane Stillwater at 1:33 PM