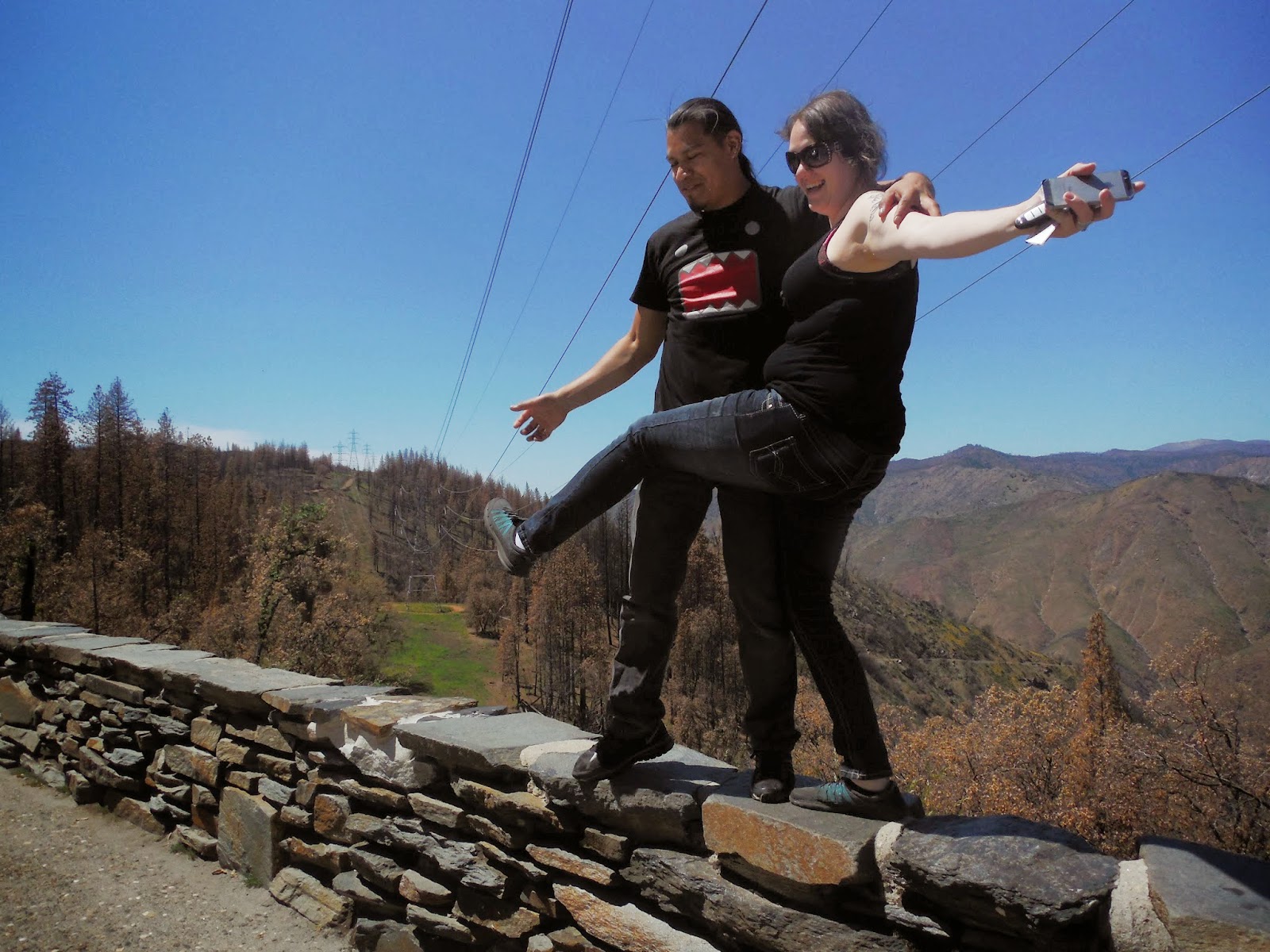 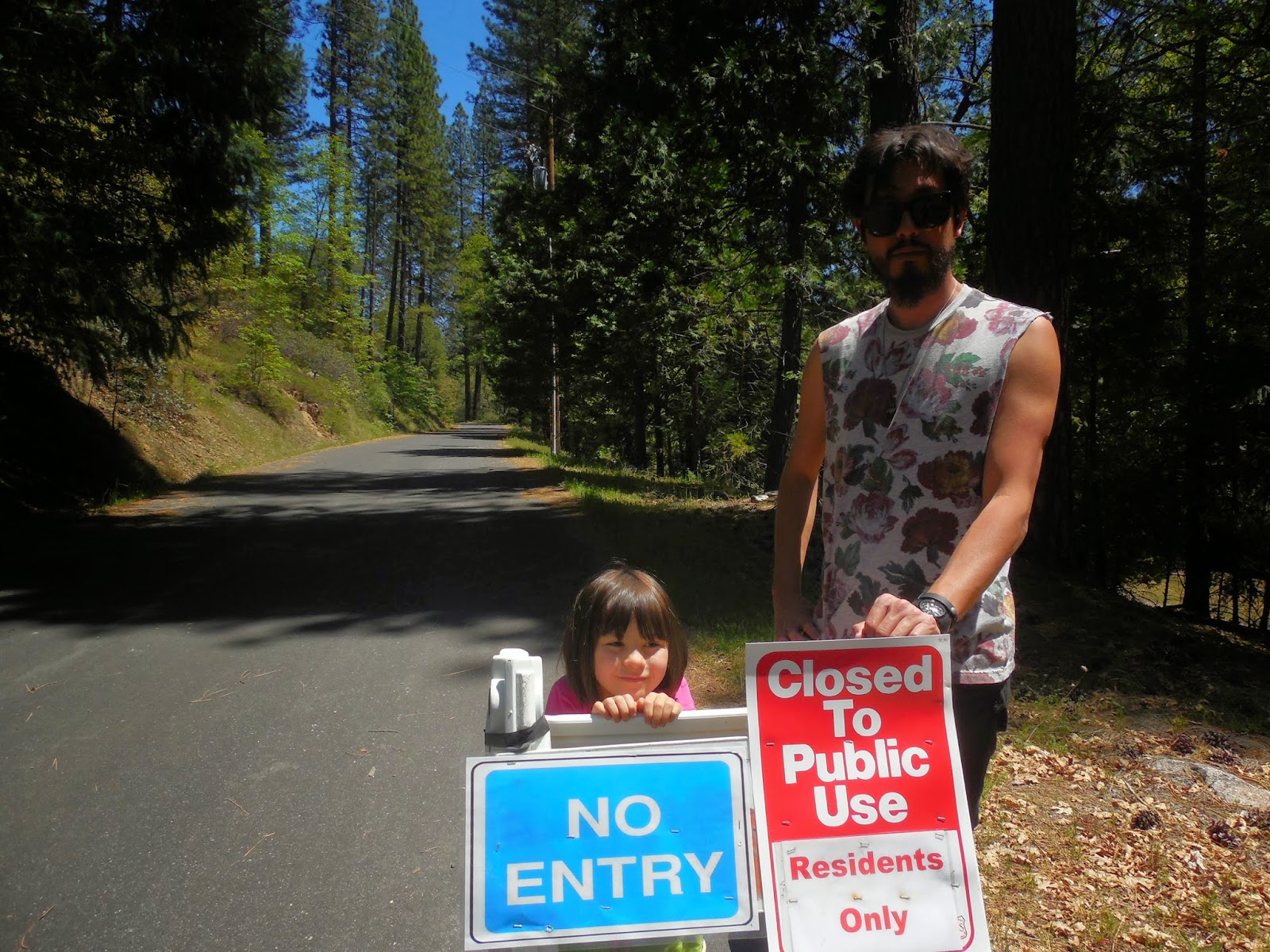 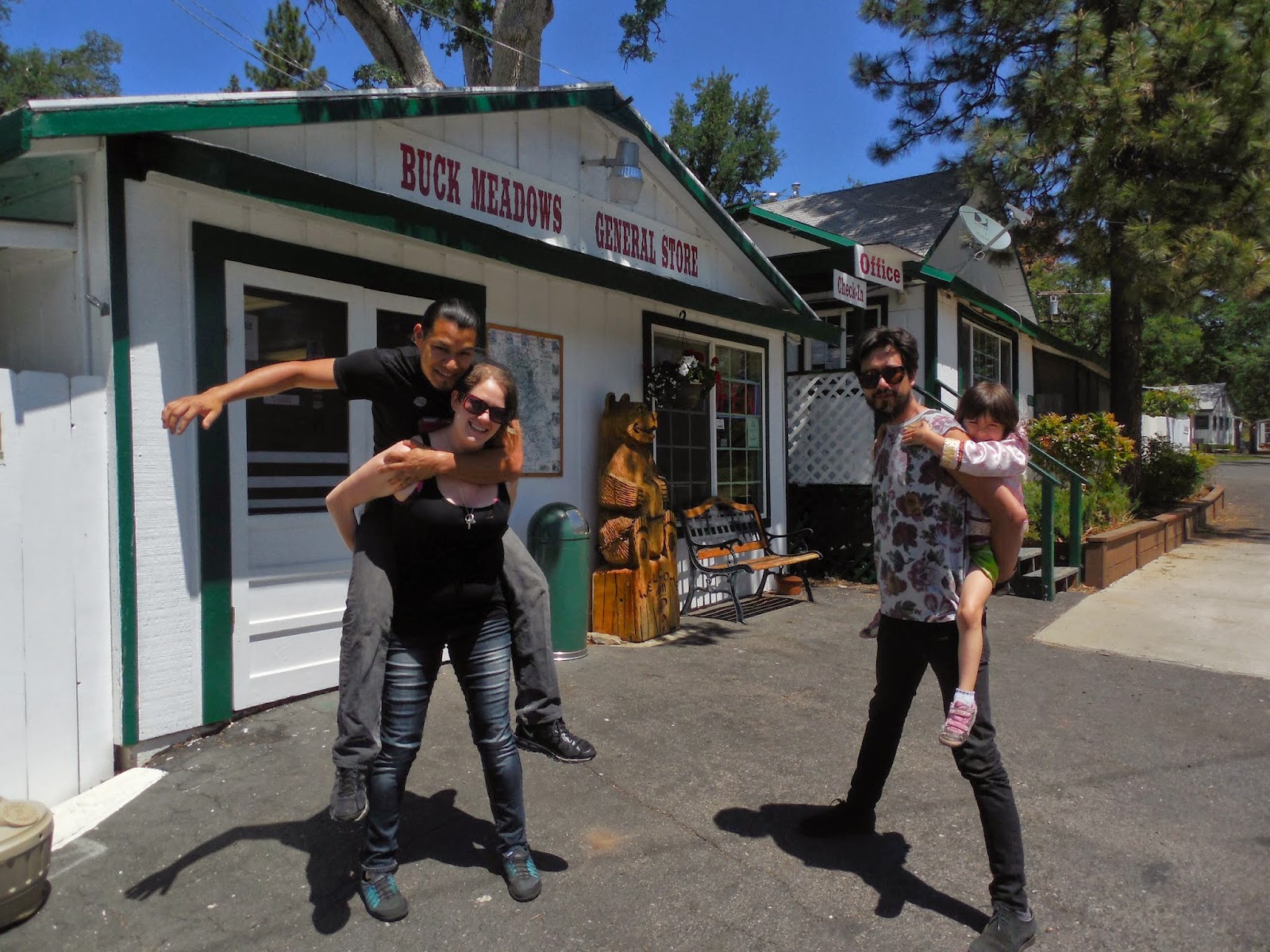 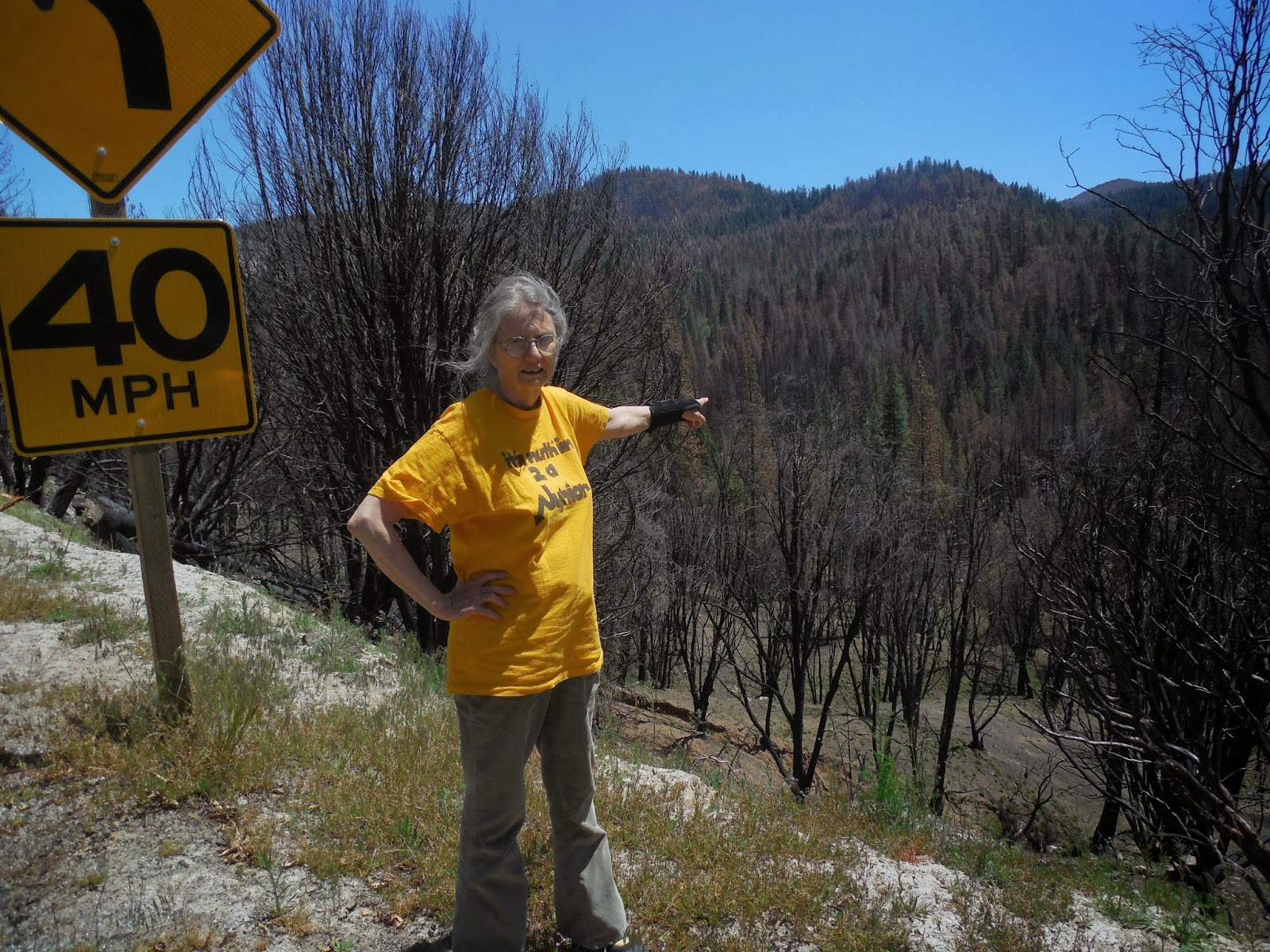 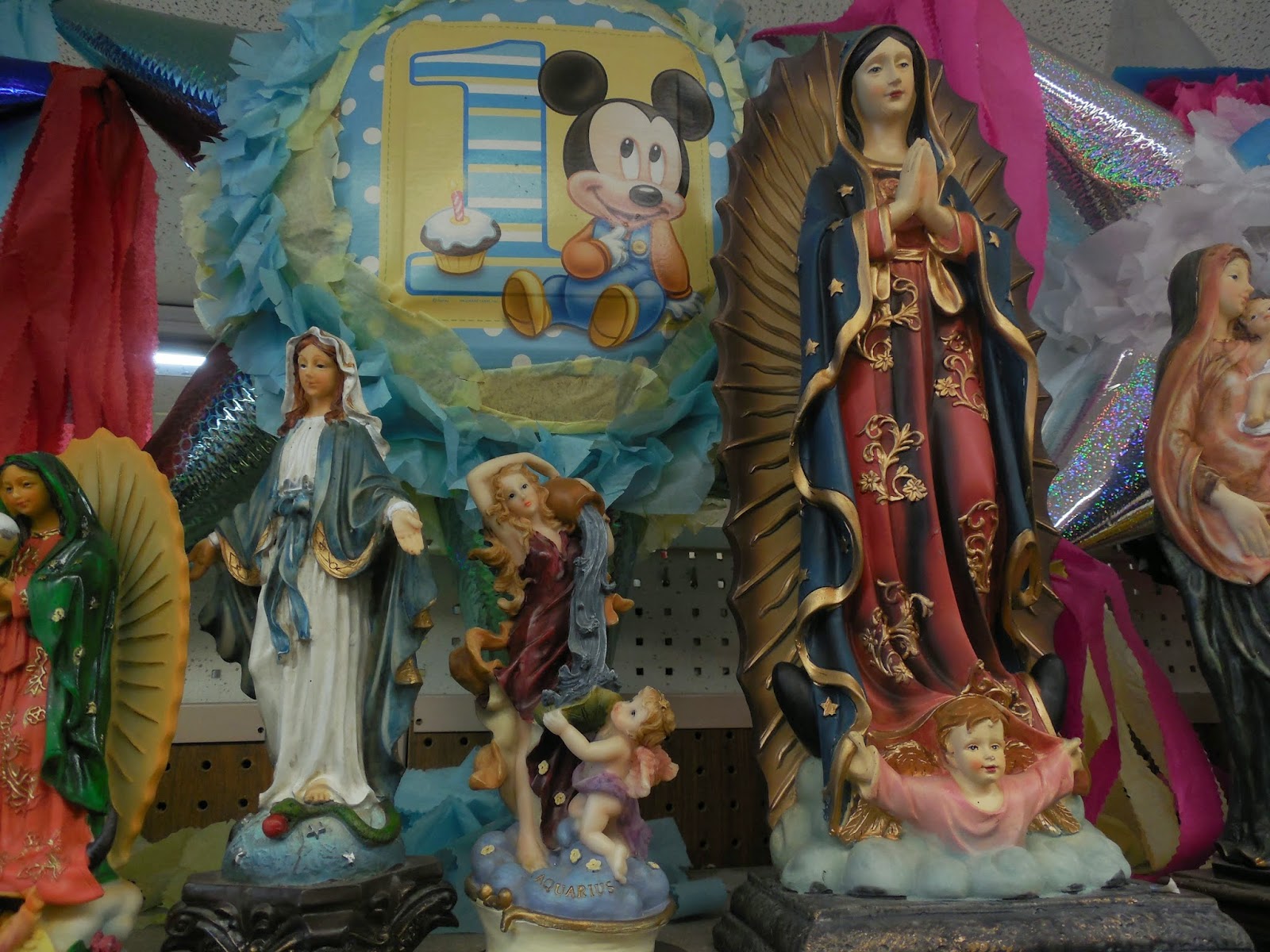 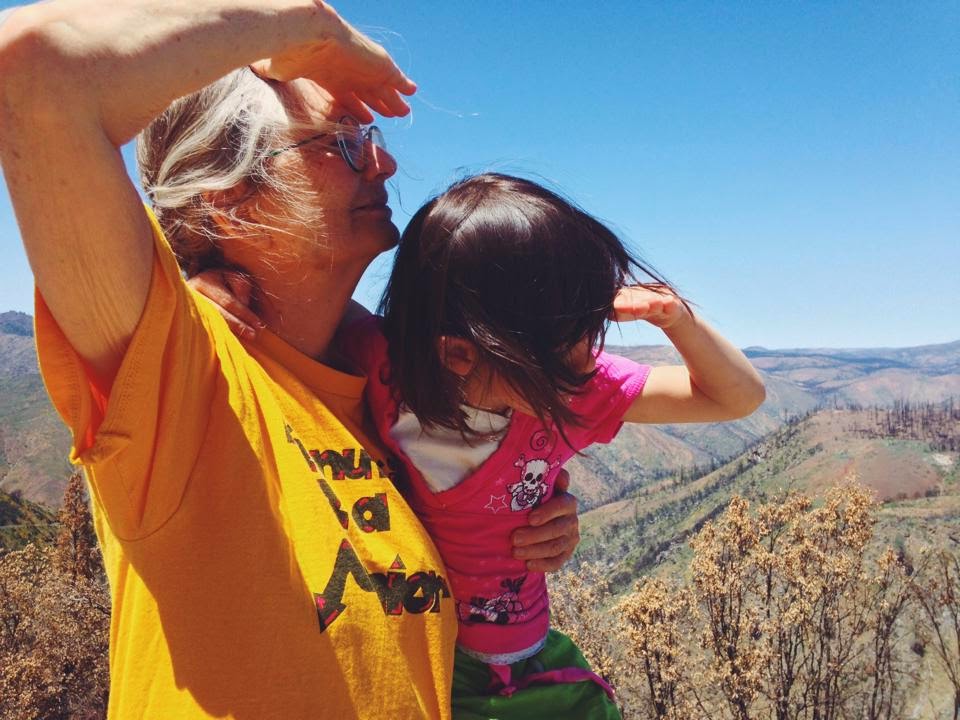 To celebrate Mothers Day this year, my wonderful children drove me up to visit the north rim of the Yosemite National Forest.  It was the perfect road trip -- not too long of a drive, yet exotic enough for us to know that we've Been Somewhere.
First we drove across California's great central valley, and then up Highway 120 via Old Priest Grade, past Groveland and Buck Meadows, to the scene of last year's horrific Yosemite Rim Fire.  It was an awesome sight -- and actually quite beautiful in a sort of post-apocalypticical way.
At a vista point called "Rim of the World," overlooking the ghostly outlines of thousands of dead trees, we read a sign that told us how many square miles had been burned (400!) and that the cost of putting out the fire alone had been 127 million dollars -- not to mention the amount of property and natural resources that had gone up in smoke as well.
Someone we met at the vista point also informed us that, "Aside from high drought conditions last year, one of the chief causes of this area's extreme vulnerability to fire had been that the 2013 federal Sequester had cut the National Forest Service’s land-management budget by over $115 million."  And that information really pissed me off -- that in order to save $115 million, we had lost $127 million instead.
But what pissed me off even more was the obviously-inebriated pseudo-Christian standing next to me at the Rim of the World, who was loudly proclaiming, "This was God's will!"  No it wasn't.

It was the will of those idiotic and greedy RepubliDem/Tea Party idiots in Washington who came up with that dumb Sequester budget idea in the first place -- and it was also the will of those surly international corporate thugs who are currently killing our planet on such a grand scale due to climate change.  Is climate change caused by God's will?  Really?  I thought it was just caused by greed.  http://www.alternet.org/tea-party-and-right/republicans-deadly-political-strategy-damage-country-and-you-damage-democratic
Then my family and I went for a walk in a nearby grove of woods, in a magically-wonderful place where the trees had been saved.
"This is God's blessing," said yet another "born-again" tourist we met.  No it wasn't.

It was the blessing of approximately 5,000 firefighters risking their lives that stopped this rapacious fire, no thanks to the "Christian" wingnuts who cut our national park budgets right and left so that corporations won't have to pay taxes and the Pentagon can fight Endless Wars on our dime instead.  http://www.palestiniandiaries.com/node/9
It was a perfect Mothers Day for me, however.  "Thanks, kids!"  The view from the vista point was so spectacular that we could have sat there for hours just drinking it in.  Plus I was given even more political insights to write about for my blog.  A win-win situation.
PS:  I really really like the idea of a benevolent universe/higher power that rejoices whenever Mankind finally manages to do something good -- and that also views with alarm whenever Mankind screws up and resorts to greed and war.  http://www.middleeasteye.net/columns/navigating-syria-impossible-indispensable-mission
But to say that "God" smiles down on idiots like, say, Cliven Bundy or Michele Bachmann as they completely lose touch with such concepts as "Do unto others as you would have others do unto you" -- or who smiles down on the good "Christian" violence-obsessed militarists in Washington who pay hundreds of billions of our hard-earned dollars to support Islamist fanatics who behead people in Syria, to support military juntas who hang protesters in Egypt, to support neo-fascists who burn people alive in Ukraine and/or to support drug lords who import crack-cocaine from Latin America and heroin from Afghanistan?   http://www.counterpunch.org/2014/05/12/look-whos-calling-voting-divisive-and-illegal/

That's stretching my credibility way too far.  That's far too much for me to believe.


PPS:  And speaking of higher powers, exactly what kind of God allows Auschwitz and Hiroshima and the Nakba to happen?

And how can God possibly agree to smile down on America, a country founded on slavery and genocide?

How come God hates Muslim prisoners in Guantanamo but loves the Islamic inquisitionists that America's War Street gleefully pays whatever it costs to behead Christian civilians in Syria?

How come God used to hate the Nazis in Hitler Germany but now loves American-sponsored neo-fascists Cossacks currently rampaging through Ukraine and burning people alive on the Odessa Steps? https://www.youtube.com/watch?v=3C7Pu-3JzjA

How come God frowns on organic farmers but blesses the spilled blood of Monsanto?

I just don't get it -- unless of course Wall Street and War Street now have the hubris and chutzpah to set their own selves up as God.
Posted by Jane Stillwater at 11:19 AM