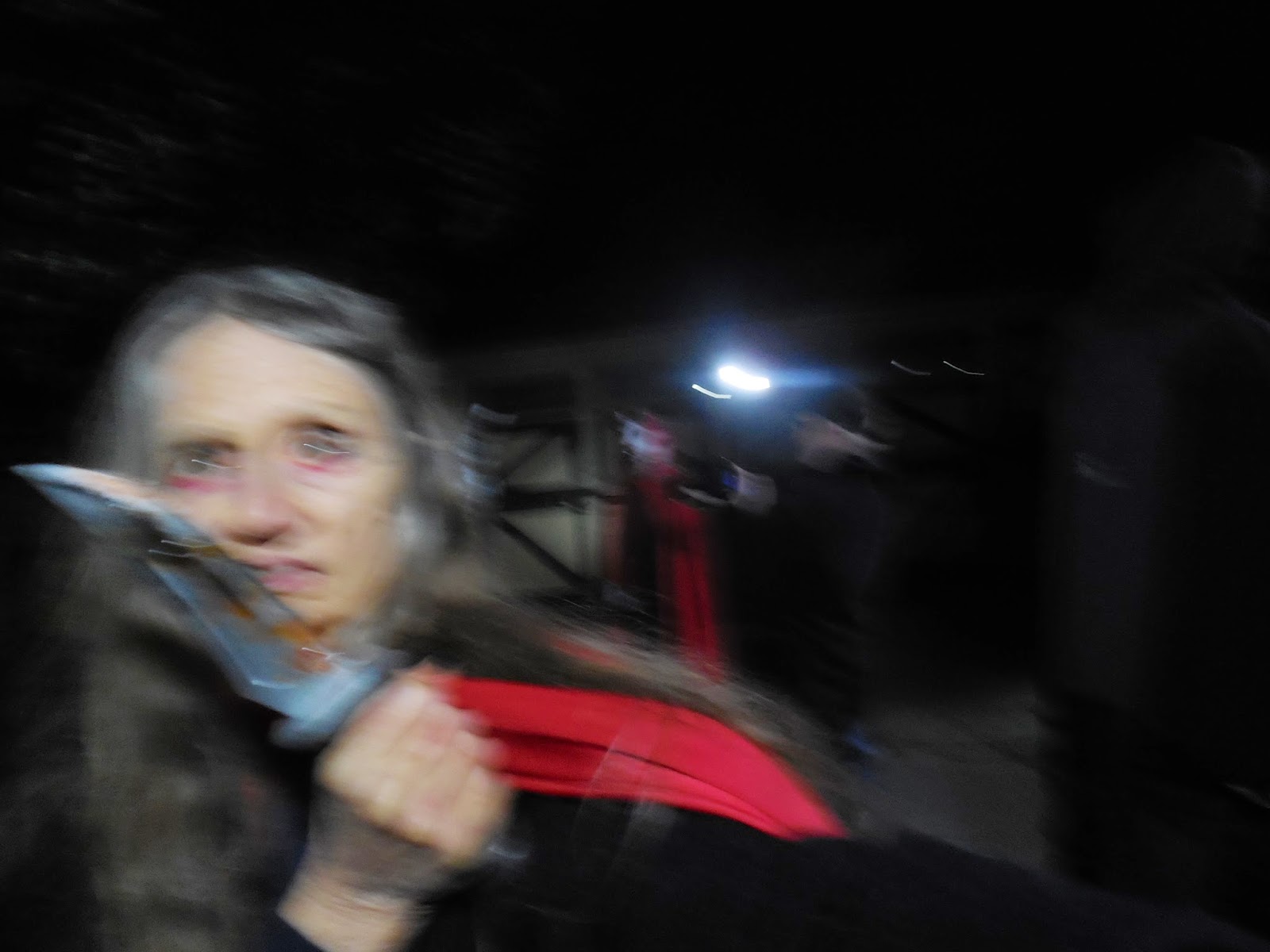 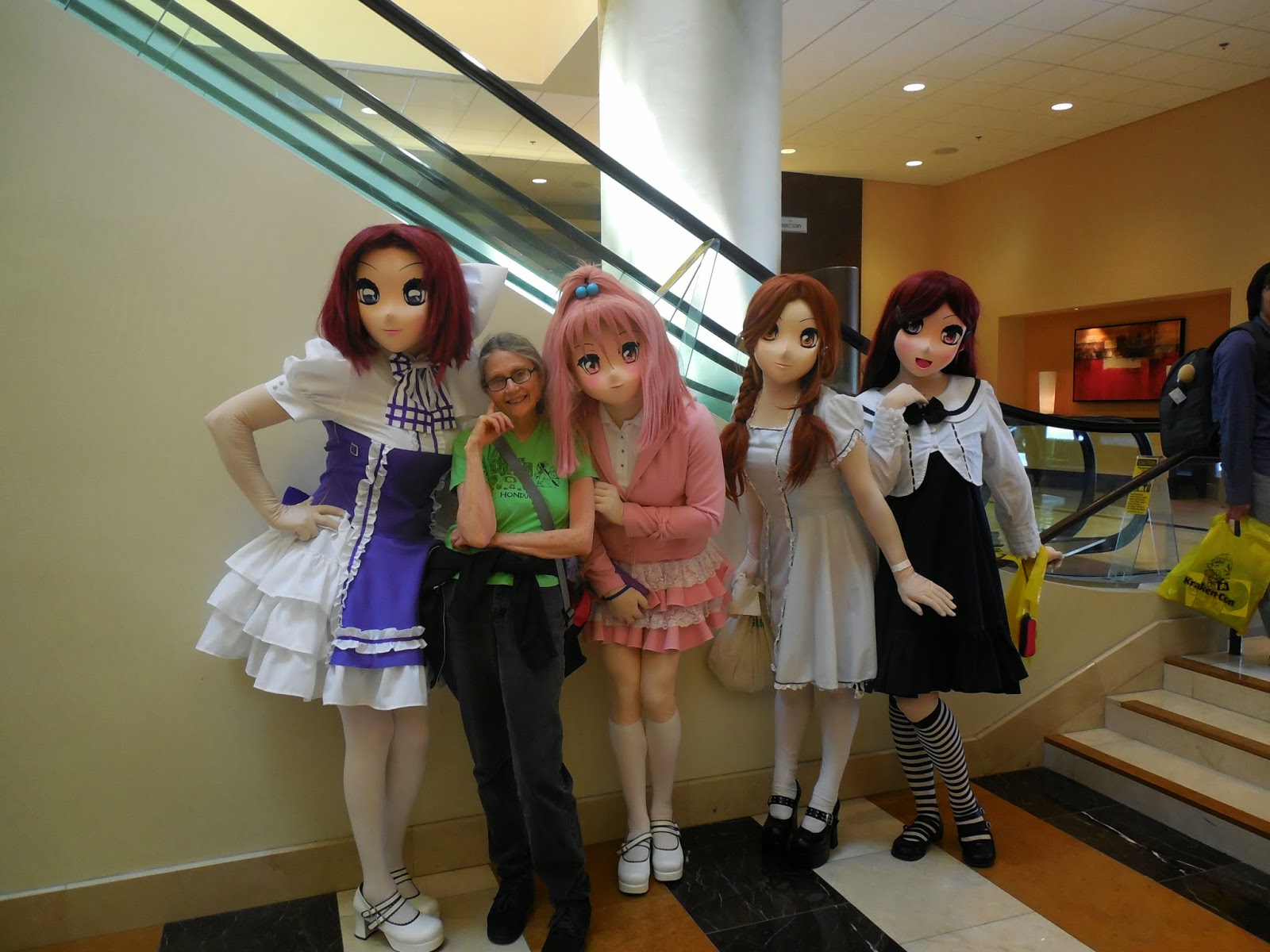 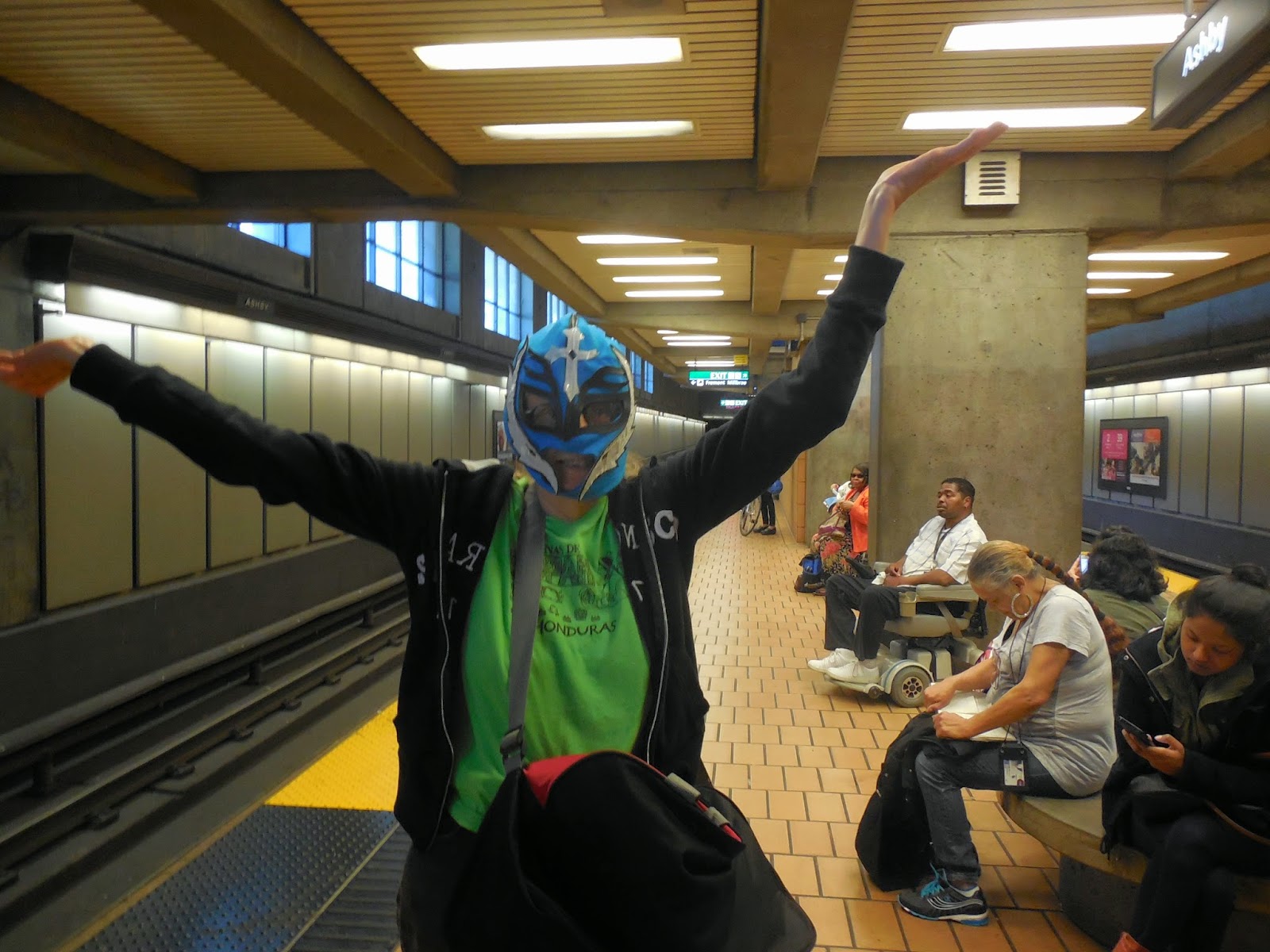 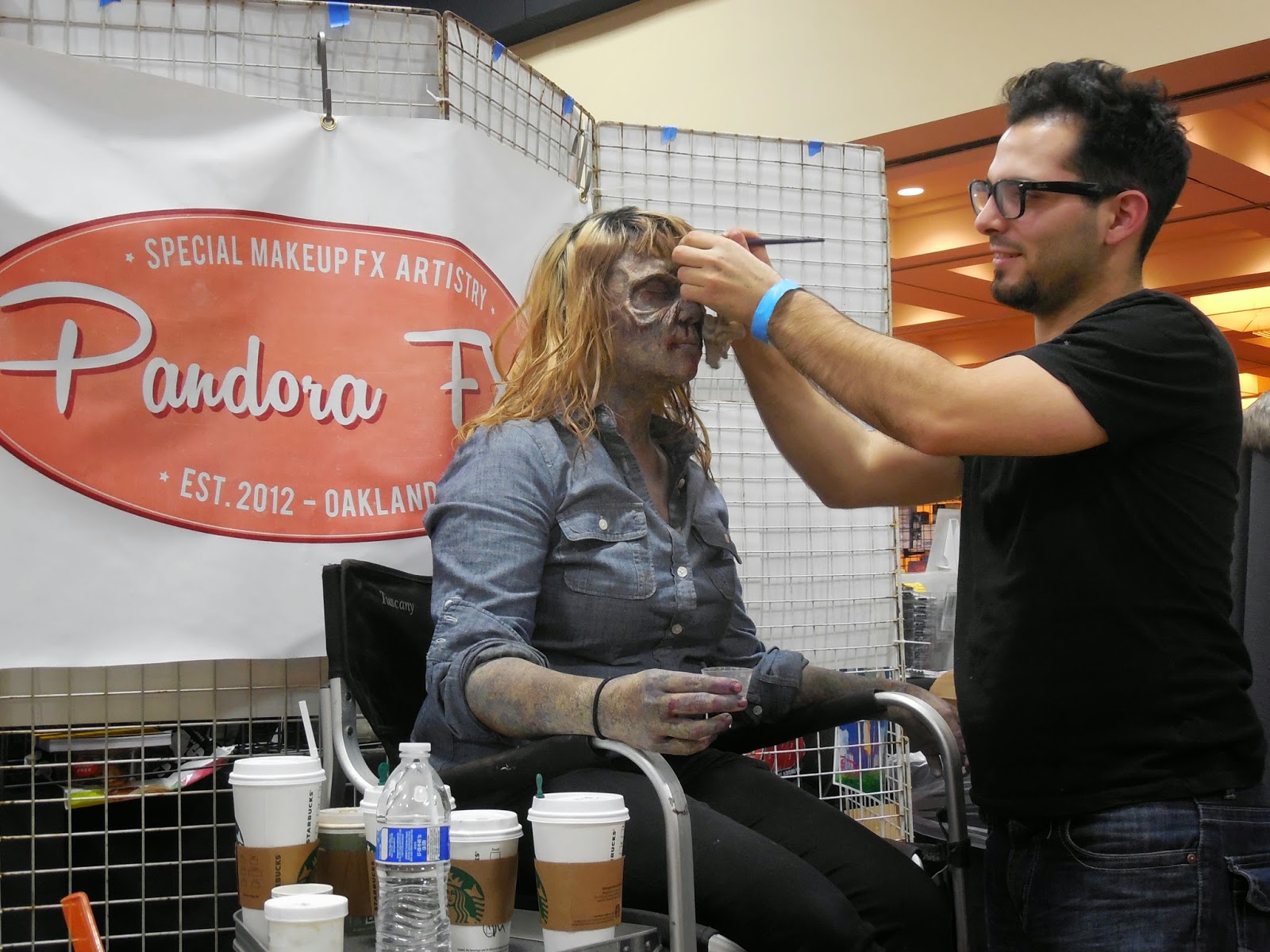 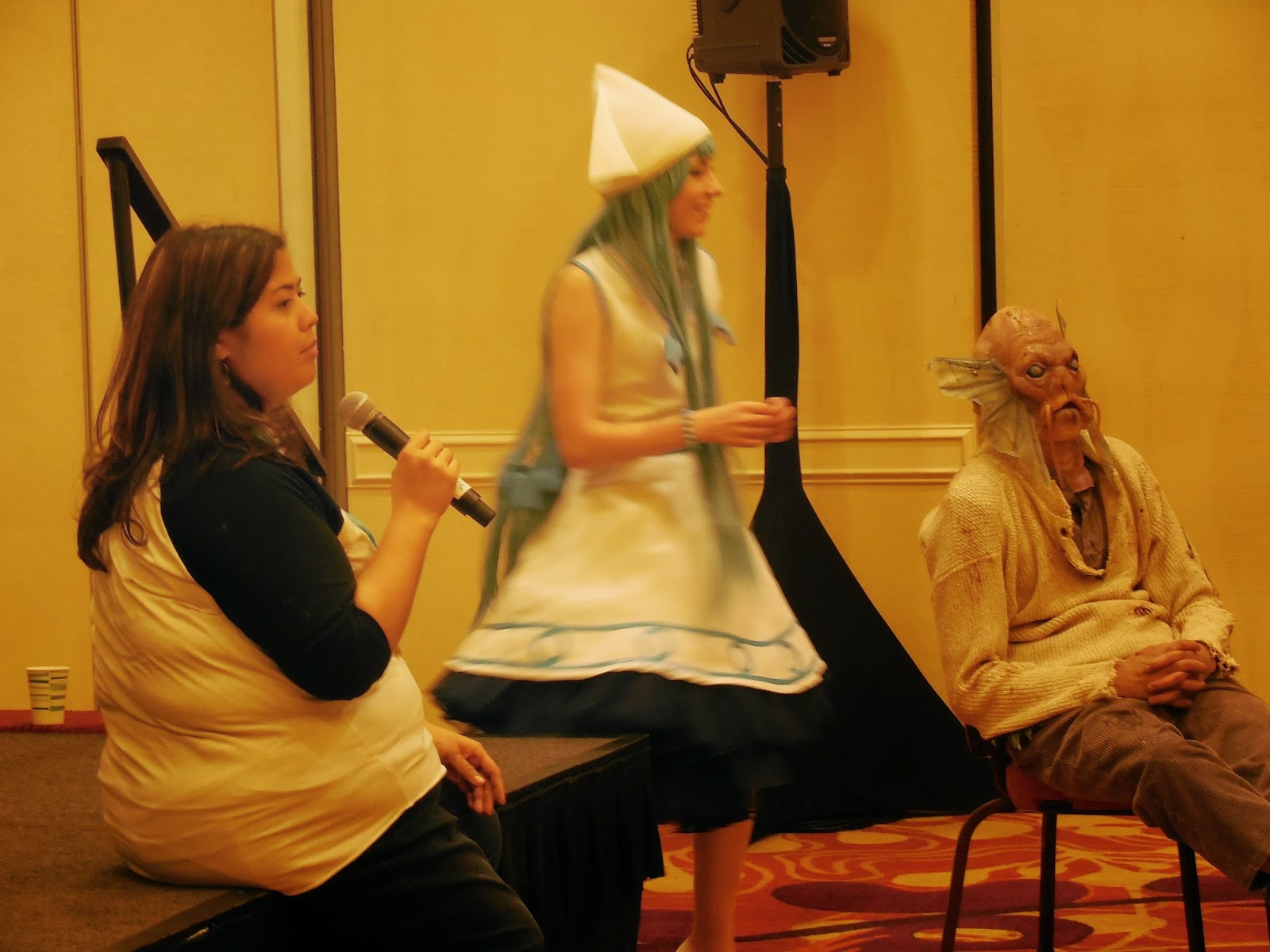 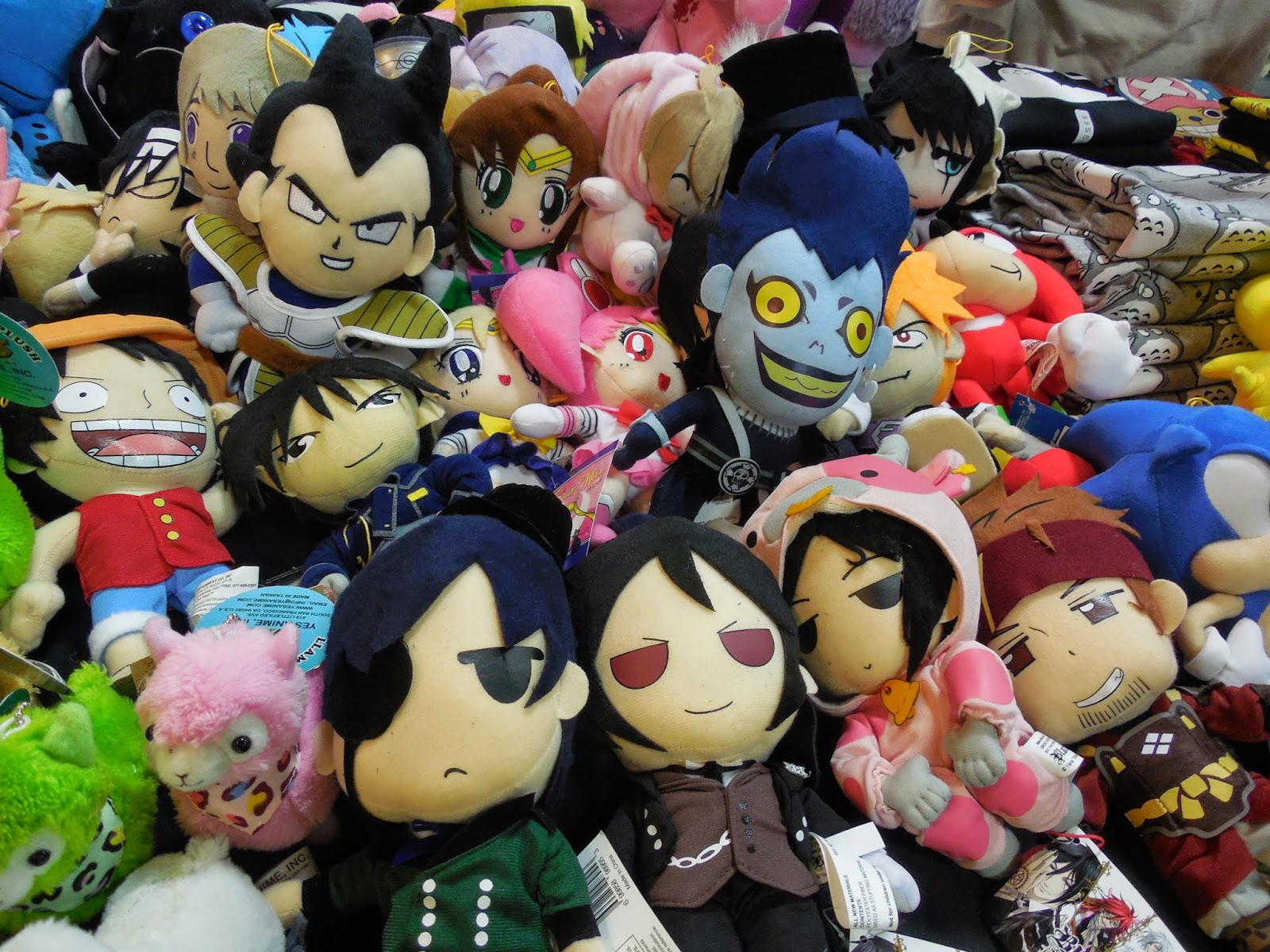 KrakenCon: Living in a fantasy paradise

For those of you who haven't got a clue what KrakenCon is, it's a semi-annual, semi-local, no-holds-barred costume parade and fan convention geared to appeal to devotees of Japanese anime comic books, TV shows and movies.  And, trust me, there are a LOT of Japanese anime fans in America, most of them part of the millennial generation (I was the oldest person at KrakenCon -- by about 40 years).

And this year's KrakenCon was held in Oakland.  So rather than shell out a bunch of money I don't have and buy a plane ticket to San Diego in order to go check out ComicCon, I ended up at KrakenCon instead -- where everyone is all dressed up like a cartoon character from Japan and it only cost me the price of a BART ticket to get there from Berkeley.
And as I wandered around the convention among all those hundreds of costumed anime fans, I couldn't help asking myself, "Why are all these people so intent on escaping reality?"  Well, the answer to that question is obvious, duh.

Why should so many members of the millennial generation even bother wanting to live in real time these days -- and thus be forced to deal with climate change, endless war and political hypocrisy on a level that leaves our minds stunned and numb?  Why deal with all that downer stuff when they can escape into a fantasy paradise filled with fun creatures like Sailor Moon and InuYasha and Squid Girl instead?
What would you do if you were under age 35?
I'll tell you what I would do if I had been born after 1978.  First off the bat, I would dump all those dirty old men on the federal Supreme Court.  Dirty money.  Would Kiki or Totoro or Howl put up with that kind of greed?  Not for a minute!
Next I'd get rid of all those cold-hearted CEOs of huge corporations who will do anything (anything!) for money -- killing off millions of innocent human beings and cute baby animals for fun and profit.  Power Rangers would never do that.  And neither would Asuta.
If I myself was part of the millennial generation, I'd make damn sure that no one in Congress ever took a nickel from anyone who lived on more than $50,000 per year.  Yeoman democracy!  That's what I would work for.  And so would Jiro Horikoshi and Naruto too.  Let's make our congressional representatives kiss our butts for a change -- instead of always bending over for Wall Street.

Of course a heroic amount of the upcoming millennial generation is already doing all of this stuff right now -- as well as enjoying a fantasy paradise while doing it too.  And hurray for you!  I salute all of you -- and even fishmen and krakens do too.  The fate of our entire planet rests in the hands of this generation's idealism.  "Time to release the Kraken!"  http://www.dailykos.com/story/2014/04/10/1290999/-Mitch-McConnell-wants-to-know-who-you-want-to-lead-the-Senate-It-s-time-to-release-the-kraken?detail=email
"But Jane," you might say, "don't these people know that anime characters aren't really real people."  So what.  Corporations aren't really real people either.
PS:  KrakenCon was totally fun.  And all the hundreds of people there dressed in full anime drag must have spent weeks and months working on creating their costumes.  Good for them.  Who says that cottage industries are dead.
And Margaret Caragan and her truly talented special effects team from Pandora FX http://pandora-fx.com/ were also at the convention, and they promised to turn me into a zombie right there on the spot.  Too late!  Been there already.  Already done that.  http://www.ikilledthedevil.com/http://www.ikilledthedevil.com/

PPS:  And another fantasy paradise that I have just recently learned about is called "Oklahoma".  Yes, the state.  You read that right.

Apparently a hundred and more years ago, African-Americans, Indians and socialists in Oklahoma all banded together to try to create a place where there was no economic exploitation and no racial prejudice.  But of course their fantasy of an on-going democratic egalitarian paradise in Oklahoma was never allowed to happen and, after the dust had finished settling, a large number of horrendous and brutal acts of suppression by government, corporatists and haters had left hundreds of these idealists dead, thousands of them in jail, tens of thousands of them burned out of their homes, and over a hundred thousand of them had their land seized right out from under them.

However at least we now know that, somewhere, these old-timey salt-of-the-earth Americans did at one time try to stand up for their rights and to create a fantasy paradise -- in Oklahoma.  And this July, Global Exchange is offering a tour of all of the places where this all happened back in the day, culminating in a trip to Woodie Guthrie's home town.  And if you want to go on this tour yourself, please sign up for it here:  http://www.globalexchange.org/reality-tours#id=the-radical-tour-of-oklahoma

"Life is a competition. The winners are the ones who do the most good deeds." You can also buy T-shirts, coffee mugs, tote bags, truckers' caps, baby gear and/or teddy bears with this logo printed on them. They make great gifts, especially for those of us who are still idealists in these troubled times. To purchase, just click here: http://www.cafepress.com/StillTWaters
Posted by Jane Stillwater at 11:16 AM