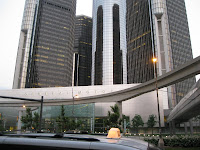 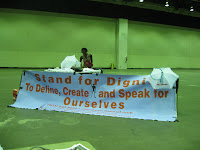 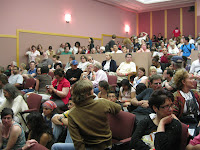 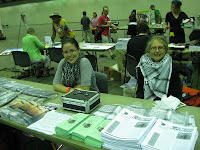 I'm currently manning a booth at the Detroit Social Forum, and across the aisle from me is a booth run by Katrina victims who have driven all the way up from New Orleans. And guess what? Katrina is STILL the issue.

"15,000 perfectly good housing units have been destroyed in NOLA since 2005," said one woman manning the "Stand With Dignity" booth. "Not enough affordable housing is being built to replace the homes that were lost, and NO ONE is being issued HUD housing vouchers."

250 Katrina survivors came up here from New Orleans to make their pain known. And they gave me a free breakfast too. And sold me a mini Second-Line Club umbrella for my granddaughter Mena who loves umbrellas.

Then Forum members were given a sneak preview of the latest Oliver Stone movie last night. Did you know that Stone went to South America and did a documentary on the new "Bolivarist" leaders down there -- including a big long interview with Hugo Chavez that apparently lasted for days. They went to Chavez's hometown. He also drove Stone through some corn fields. "This is where we make all those Iranian atomic bombs," Chavez joked. Stone also included that famous clip of Chavez saying, "You are a donkey, Mr. Bush," wherein everyone in the audience laughed.

Anyway, the Stone preview was a big success. People flooded the theater. People were jamming the aisles and even lying down on the stage. Don't tell the fire marshall.

I don't think that "South of the Border" will ever become a blockbuster at your local cine-plex but I gave it two big thumbs up.

Then I trudged back to my newly-found fleabag motel, past Cadillac Drive and Chrysler Drive and the General Motors headquarters, which appears to have been built from mostly glass and chrome. But its flags were all at half-mast. In honor of the long-overdue death of GM's famous gas-guzzlers? Then I trudged some more -- past several large buildings that were boarded up and deserted, and a convenience store where I bought a bag of "Better Made" potato chips, Detroit's finest chips. Founded in 1930. "For your eating enjoyment, our potato chips are cooked in the finest oils, contain 0 grams of Trans Fat and are flavored with the highest quality seasonings." I'm saving them for breakfast.

I also talked with someone who had just gotten back from Nepal. "I met an Israeli girl over there who had just finished her military service and was on walkabout. She said that she was a complete Zionist. She said that Israel used to be all theirs -- meaning the Zionists of western European origin -- but now Israel's majority consists of Sephardi and eastern European Jews. She hated that. And she kept talking about 'Zionism, Zionism, Zionism'. But then she also incidentally mentioned that she planned to get out of Israel and move to Europe just as soon as she could." Interesting.

But after working the Free Palestine booth for three days, I was beginning to fade. I mean, how many freaking brochures can one hand out? Hundreds! And how many arguments over the Palestine Question can one survive? Not all that many happened here, actually. Most people here at the Forum tend to agree that the issue of fairness for Palestinians is right up there with issues like fairness for Native Americans, oil spill victims, workers laid off when their jobs moved to Asia, voters, people who still believe in democracy and the Constitution, victims of corporate America's war on the middle class, Afghan and Iraqi women and children caught in war zones, victims of bank greediness, victims of media war-mongering, victims of environmental sloppiness, and victims of corporatists, racists, neo-colonialists and misguided viewers of Fox News.

Then Noor Elashi walked by my booth and told me her story -- and I was shocked. Apparently her father had been happily running a charitable organization called the Holy Land Foundation, which collected money for Palestinians in need. The foundation then gave its donations to a zagat committee to distribute in Palestine -- the very same zagat committee that distributed monies from the American Red Cross, US-AID, the United Nations, etc. Then Noor's father came under viscous verbal attack by Zionists for helping malnourished Palestinian children. And while under such severe attack, Noor's father kept asking the U.S. government to please tell him if he was doing anything illegal or wrong -- and they kept telling him, "No. You're fine."

And then suddenly Noor's father found himself being charged by the feds with financing a terrorist organization. And now he is serving a 65-year jail term -- and on trumped-up evidence too. Yikes! Shades of Nelson Mandela and Wen Ho Lee!

"But why aren't the American Red Cross, US-AID and the U.N. being charged with helping terrorist organizations as well?" I naively replied.

"Because of pressure brought to bear on the federal government by Zionists." Double-yikes.

Do you know what this means? It means that anyone who asks for justice for Palestinians -- or even just tries to raise their standard of living out of the dust -- may be facing a possible 65 years in jail! Even me. Even you.

Right now, all I have to worry about is figuring out what to eat for dinner tonight. But who knows? If I keep on fighting for justice for Palestinians, I may never have to worry about what I will be eating for dinner ever again -- or at least not for the next 65 years -- because I will be having all my meals catered for me until I'm 133 years old by United States government correctional facilities.

PS: Here's an important editorial from the Israeli newspaper Haaretz. I usually don't print other people's stuff in its entirety (because I like my stuff better), but this is important. The article is called, "Israel should be thankful it didn't make it to the World Cup":

An Israeli presence at this greatest of global sporting spectacles would have been guaranteed to attract an unrelenting wave of protests, PR stunts and bad publicity. As the World Cup progresses, Israelis might consider sending thank-you bouquets to the national soccer teams of Switzerland and Greece, who knocked Israel out at the qualifying stage.

Of course, it would be nice to wrap ourselves in blue and white, and cheer on the likes of Yossi, Guy and Ben. But on this occasion, one should probably be thankful that we didn't make it.

There were large demonstrations in Cape Town last week following the Mavi Marmara incident. An Israeli presence at this greatest of global sporting spectacles would have been guaranteed to attract an unrelenting wave of protests, PR stunts and bad publicity.

In the days since Operation Sky Winds, Israel has been able to get a glimpse of the future and into the abyss that awaits if we continue on our current course. It is a future replete with both insecurity and the indignity of global opprobrium and sanctions. Palestine has now irrefutably become a global cause. That is certainly inconvenient for Israel and maybe unfair.

Popular consumer, labor union, and cultural boycotts are gathering new momentum. Israel’s predicament will not be rectified by better PR or a new foreign minister; it has become structural and therefore far more worrying.

The logic of the kind of unarmed resistance represented by flotillas to Gaza is to shine a light on the wrongdoings of an offending party. Ideally, one will succeed in appealing to the better nature, to the humanity, of the offending party (Israel), and its behavior (in this case, the blockade on Gaza) will be corrected. If not, then one may seek to shame that party in the court of global public opinion. Any over-reaction or additional offensive behavior will only serve to strengthen the case of the light-shiner and "prove" the original premise of wrongdoing.

In this instance, Israel's leadership played its role with Lionel Messi-like perfection.

In short, the game is up. This is not defeatism -- it's an acknowledgment of a reality that, by ignoring, causes Israel to imperil itself. It cannot be reversed by a good YouTube video or by cloning President Peres. An occupation that just entered its 44th year and entails denying basic rights to millions of Palestinians can no longer be sanitized. As long as Israel maintains that occupation, the costs will become increasingly burdensome.

Having lost the world, Israel's focus turns in on itself. The country's leadership has to work harder to keep its own public on board for the occupation project. This requires a growing suppression of dissent, further ostracizing Israel's Palestinian minority, and ever-more aggressive appeals to Jewish national pride. Democratic norms are thereby eroded, further feeding the tarnishing of Israel's image. This is the vicious cycle in which Israel is embroiled.

It is true that there will almost certainly always be unjustified prejudice toward Israel. Whatever it does, some people will always be out to get us. But prejudice is not what motivates the vast majority of those mobilizing in solidarity with the Palestinians. The occupation is the oxygen of their campaign, and the vast majority seek an end to it -- not to Israel itself. An Israel that fails to appreciate this and which sustains the occupation is the single most proximate cause of its own delegitimization.

It is still in our power, however, to change all of this. We can genuinely end the 1967 occupation and live up to our declared democratic ideals.

But if Israel does not take the lead, then let us at least hope that our remaining friends in the world will step forward with their own proposals and that we in turn will have the wisdom to say yes to them.

Enjoy the World Cup, and let's look forward to Israel's qualification in 2014 being all about soccer and blissfully devoid of politics.

Posted by Jane Stillwater at 1:43 PM