Madam Jane predicts: "My new sci-fi novel will be a bestseller!"
"I always wanted to be a science fiction writer," said Madam Jane yesterday over tea and pumpkin pie in her back yard.  That makes perfect sense.  She can see into the future.  Why not write a book that describes what she sees?  But then it would no longer be science fiction, right?
"Here's the plot so far," said M.J.  "Some evil globalist bastards start scheming various scenarios on ways to vaccinate the entire world with some weird greenish-brown secret formula liquid that will transform us all into robots."  Sure, why not. 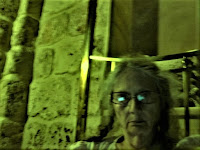 "However, they only have a short window of opportunity to do this in."  Before Captain Marvel finds out?  "So they force, blame, guilt-trip, coerce and bribe everyone into getting The Shot.  They cajole, shame, apply peer pressure, brainwash, threaten and stampede everyone into getting vaxxed.  Their techniques are both highly effective and painful to watch."  And probably painful to read about too.
"But still their clock keeps on ticking, they haven't gotten everyone shot up yet and time is rapidly running out.  They'll never make their deadline.  People are starting to wise up."  So what should the evil globalist bastards do?  "They put more and more pressure on everyone to get The Jab.  Pregnant women, babies, first responders, grandmas, movie stars, airline companies, nurses, Walmart, your best friend next door.  We all start feeling the turn of the screw." 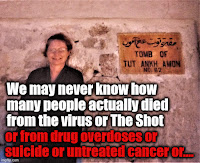 So.  Will the evil globalist bastards finally make their quota just in time to take over the world?  "I haven't worked that part out yet," replied Madam Jane.  Wait, what!  You're not going to just leave me hanging here like this!
"Sorry but you're just gonna have to buy the book."
PS:  According to Madam Jane, we small remnants of unvaxxed humans still left in this world right now are not just some endangered species about to be wiped out by the advance of Civilization.  No, we are even more special and precious than that.  We are now like some ancient buried treasure -- a living, breathing UNESCO World Heritage site containing the only shreds of "natural immunity" left in this world. 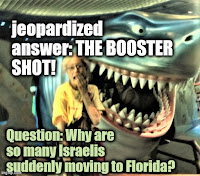 "And while almost everybody on the planet is now protected from getting a serious case of the original COV$D virus," continued Madam Jane, "they all will be forced to get booster shots like clockwork for the rest of their short lives in order to protect themselves from the variants."  But why?  "Because their new immune systems will only recognize the original virus -- but not its variants."
"But what if that life-saving booster formula is suddenly no longer available or is priced so high that only the evil globalist bastards can afford it?" I asked.  "Is everyone else going to be doomed?"
"No matter who does or does not survive," replied Madam Jane after a short glance at her crystal ball, "you few remaining unvaxxed humans will soon be the only living archive for our vast collective memory of what it was like to have a human immune system -- one that took a million years to create."  Hey, I'm an artifact!
PPS:  Madam Jane also predicted that all Pentagon budget limits will be raised by an outrageous bunch of more billions ASAP, even though there are no more new invasions planned -- except of course for the current costly misadventures in Yemen, Syria, Palestine, Iran, Lebanon, Africa, Asia and Latin America.  Whew.  I guess.
"And the Federal Reserve will continue stealing trillions from us taxpayers at its usual alarming rate," she predicted next.  "However, rest assured that there will be no more paltry trickle-down 'stimulus' handouts for the likes of you and me.  But the good news is that the next worldwide disaster those evil globalist bastards plan for us next will not involve germs."  Money?  "Yeah."
Resources:
How many times has Dr. Fasci lied to us?  Let me help you count the ways:  https://www.globalresearch.ca/video-emerges-fauci-others-planned-universal-mrna-flu-vaccine-became-covid-19-mrna-vaccine-because-people-not-afraid-enough-flu-virus/5757839
For you science geeks, here's more data about the dangers of The Shot than you could even believe possible:  Winning the War Against Therapeutic Nihilism & Trusted Treatments vs Untested Novel Therapies
Welcome to the 75th anniversary of the Nuremberg trials, Prez Biden.  https://www.bitchute.com/video/cLZ3s6spE6k3/
And as usual James Corbett connects all the dots:  https://www.minds.com/CorbettReport/blog/everything-is-connected-1289066761043316753

Posted by Jane Stillwater at 11:37 AM