18 months ago: Visiting New York City, the very epicenter of COV$D
Editor's note:  Here we are, dear reader, about to view a rough draft of Chapter 3 of my proposed book about traveling throughout America during that strange first year of the Great COV$D Pandemic.  "2020: My Year of Living Dangerously During the Lock-Down" is the book's working title.
PS:  This adventure took place back in the "good old days" when travel was still allowed.  Nobody is allowed to travel hardly anywhere any more.  My next scheduled trip to the Middle East was just cancelled.  Why?  Because of petty COV$D lock-downs of course -- but also because no one there trusts Americans.  Can you blame them?
April 11, 2020:  Holy moley!  I'm leaving for New York City tomorrow morning at the butt-crack of dawn.  New York City -- where apparently freezer-morgue trucks line the streets and corpses are being buried in mass graves due to COV$D.  Talk about being a war correspondent?  I'm going to be entering what sounds like a war zone.  This opportunity is just too good to pass up.  Plus airfares and hotel rooms are all super-cheap right now.  Might as well take advantage.
April 12, 2020:  After all this time, is it any surprise that I am the absolute queen of organized packing?  And at exactly 4:45 am, I hauled my suitcase and laptop and purse and box lunch and cup of hot tea out into the dark and damp streets of Berkeley, only to sit on the curb for 27 minutes while waiting for the F bus to San Francisco. 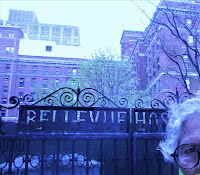 "Here comes the bus!" I said to myself -- because there was absolutely no one else on the streets for a five-block radius for me to say it to.  COV$D-19[84] has shut this entire city down.  There aren't even cars driving by.  And BART trains won't even start running until 8:00 am.  Hurray for A.C. Transit!  Hurray for the F bus!  New York City, here I come.  But after I finally got to the transfer point in downtown San Francisco, some desperate and ungainly running after the #396 bus was involved -- running down Mission Street in the dark, dragging all that luggage and yelling "Stop!  Oh, please stop!"
"This isn't a bus stop, lady," said the driver but I looked so pathetic that he let me onboard anyway.  And it still isn't even daylight out yet.  My three-day adventure has officially begun.  Go, me!  No Fear!  Except for the fear of missing a bus.
You simply can't believe what happened next.  I was the only person at the TSA security checkpoint.  Let me say it again.  The only one.  Unreal.  And now I'm one of perhaps ten passengers on a plane that should hold over 200 travelers.  How cool is this!  If only it wasn't so sad.
And here I am on the airplane, reading a murder-mystery paperback about a private security company that tried to take over America by creating a giant fear incident.  The fictional company's name was Blackthorn -- and guess what?  Eric Prince's Blackwater company will now take over security for the current COV$D-19[84] fear incident.  I'm speechless.  "Life imitates art."  The flight attendant also fed us some most excellent granola bars on the plane.  I even got two extra ones all to myself.
JFK airport was empty.  "A city brought to its knees," was my first thought.  And of course my next thought was, "Where is the restroom".  JFK's airtrain is empty.  Will the subway be empty too?  I'm just about in tears.  I curse the bastards who did this. 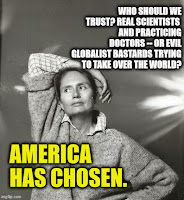 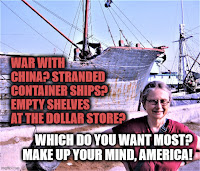 But I've had a fabulous adventure -- and I'm not gonna starve between JFK's Gate 5 and south Berkeley, right?  But then it turns out that my freaking journey home is still gonna go on and on and on and on.  First I waited an hour for a bus to take me to JFK.  Then a really long plane ride with a boring transfer in Chicago.  Waiting for another bus outside the San Francisco airport.  In the dark nighttime.  Out in the freaking cold nighttime weather.  This is taking forever.  "How much does a taxi to Berkeley cost?"
"$80."  Oh.  So I waited and waited some more.  Out in the cold.  Finally a bus to downtown San Francisco arrived.  And now I'm still waiting in downtown S.F.  Opened my suitcase, pulled out an extra pair of pants and put them on too.  Right in the middle of the bus terminal.  At midnight.  3:00 am, New York time.  Who knew I could be this resilient, living on granola bars for the last ten hours.  If I don't get COV$D-19 after tonight, then I'll know that we are being lied to for sure!
But, hell, I've also been to Bellevue Hospital, the world's Ground Zero for COV$D -- with no serious side effects from that either.  So far so good.  And I still have one more Kind bar left too.  I shoulda taken that cab.
April 16, 2020:  It's 2:30 am here in Berkeley!  I finally made it home, but it was never at any point a sure thing.  Caught the last bus of the night from the airport to San Francisco.  A long wait at the Trans-Bay terminal.  Finally the very last night-bus to Berkeley arrived.  Next question?  Do I have time for a hot bath before I pass out?
Resources:
How does Dr. Merrick even do this?  Gives you everything you need to know about COV$D in record time:  https://rumble.com/vnrqz7-dr-lee-merritt-packs-mountains-of-information-deconstructing-fallacy-of-the.html
And how to say "Yes, but..." to the vaxx:   https://www.williambernardbutler.com/vax-letter-2-0/
And if you need any advice regarding your legal rights in a time of COV$D, here it is:  https://www.crrow777radio.com/360-god-given-rights-are-permanent-unless-free/ 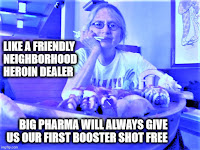 Then there's the systematic purge of any of us who do not immediately conform in lock-step:  "For the past 18 months, people who refuse to convert to the new official ideology are now being segregated, stripped of their jobs, banned from attending schools, denied medical treatment, and otherwise persecuted." https://dissidentvoice.org/2021/10/the-great-new-normal-purge/

Posted by Jane Stillwater at 8:19 PM