Leonard Peltier vs. J. Edgar Hoover:  Still haunted by the ghost of COINTELPRO


You should see my fabulous new "Free Leonard Peltier" T-shirt!  It's the best souvenir of Florida that I could possibly find.  Long story.

Leonard's tragic saga first began back in 1924 -- when that un-American rat-fink J. Edgar Hoover became the first director of the FBI and began turning his new-found powers to the Dark Side.  Even now, even 46 years after J. Edgar's death, we are still discovering more and more info regarding all the dirty tricks Hoover played on America's working class, justice-seekers, intellectuals and people of color.  Trust me, this guy was bad news -- the proud father of the FBI's duplicitous, divisive, perfidious, sneaky, unjust and subversive reputation, one that the FBI still struggles with to this day.

By the 1960s and '70s, Hoover and his infamous COINTELPRO goon squad consistently declared war on Blacks, immigrants, Native Americans, Vietnam protesters, gays, unions, rock 'n' roll and basically just about anyone who wasn't either a Stepford Wife or a body snatcher.  I was there.  It really was that bad.  https://www.whoisleonardpeltier.info/home/background/cointelpro/

Several people, however, did stand up against J. Edgar and his minions back then -- even though it was both dangerous and hard.  Martin Luther King, JFK and Bobby Kennedy, to name a few.  And also Mumia abu Jamal and Leonard Peltier.

Back in 1975, the FBI had illegally invaded the Pine Ridge reservation in South Dakota, on Lakota land.  Back then, even though Hoover had finally died, his poisonous and hateful policies still lingered on.  Back in 1975, it was like playing cowboys and Indians on the rez -- only the Indians weren't allowed to fight back.  Those who did try to defend themselves and their families soon found themselves to be dead.  An estimated 300 Native Americans died that way.

But then Leonard began to demand Native American treaty rights and support the A.I.M. protest at Wounded Knee in 1973 -- at the cost of making themselves visible to the FBI.  So when two gun-toting hot-shot FBI cowboy-wannabes (who should never have been on the reservation in the first place) turned up dead at Pine Ridge, the finger of blame pointed to Leonard.  A scapegoat was needed and a scapegoat was found.

But don't take my word for it.  Get the full story of the FBI's brutality, lies and betrayals yourself, as meticulously documented by author Peter Matthiessen in his well-researched book, In the Spirit of Crazy Horse. https://www.penguinrandomhouse.com/books/322000/in-the-spirit-of-crazy-horse-by-peter-matthiessen/9780140144567/

And 44 years later, Leonard Peltier is still stuck in jail for a crime he didn't commit -- and people are still wearing their "Free Leonard" T-shirts.

Peltier is now 76 years old.  He is incarcerated in a high-security federal prison in Coleman, Florida, just outside of Tampa.

At the book convention I attended in St. Petersburg/Tampa area recently, I asked author Tim Dorsey if he had named his infamous fictional character after the notorious Coleman prison.  "No," Dorsey said.  Oh.

Leonard, fortunately, is now incarcerated in the elderly unit at Coleman and no longer has to worry (much) about getting beat up by gangs (again).  He teaches art to the convicts and also paints stirring portraits of "traditional" Pine Ridge Native Americans in his spare time. 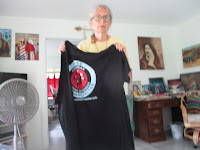 Leonard's health is failing.  He is not now a danger to himself or society -- and he never was.  Isn't it time that our government finally frees Leonard Peltier from the ghost of J. Edgar Hoover?  Peltier is one of the last of the heroes who stood up to Hoover's COINTELPRO gang of lame-asses, putting Leonard in the same class as MLK and JFK.  We should be giving Peltier a homecoming parade instead of keeping him locked up in some dungeon for the rest of his life for a crime that he didn't commit.

PS:  Wanna buy your very own ultra-chic "Free Leonard" T-shirt just like mine?  You don't have to visit Tampa like I did.  You can just order it online.  https://www.whoisleonardpeltier.info/storefront/

PPS:  I forgot to mention about those four brave Freedom Riders who left Mankato MN on horseback 55 days ago, and have ridden their horses all the way to Florida to go see Leonard at Coleman prison.  On horseback!  They are almost there.  What a heroic trek!  Say hello to Leonard for me when you get there, okay?  https://www.facebook.com/groups/2168963039841348/

PPPS:  Don't let the ghost of J. Edgar go on laughing at Leonard from inside his special-agent crypt in Hell.  Instead, write to President Trump (1600 Pennsylvania Avenue, Washington DC 20500) and ask him to grant clemency to Leonard Peltier (who is much more deserving of clemency than Paul Manafort, BTW).  And Trump just might do it too -- considering what Trump himself currently thinks (and tweets) about the FBI!

Stop Wall Street and War Street from destroying our world.   And while you're at it, please buy my books.  https://www.amazon.com/Jane-Stillwater/e/B00IW6O1RM
Posted by Jane Stillwater at 9:20 AM